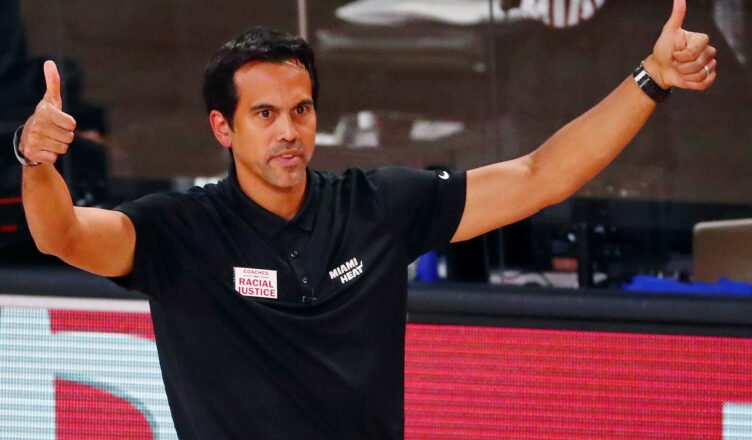 While none of us were paying attention Miami Heat coach Erik Spoelstra has quietly become one of the greatest coaches in the history of professional sports. This might seem an overstatement. But a case could be made that in thirteen years Spoelstra’s career with the Heat has almost matched Don Shula’s career with the Dolphins.

Yes, Shula is the winningest NFL coach of all time. Erik Spoelstra only has the 25th most coaching wins in NBA history. But take a second to compare the two Miami coaching titans and the parallels are uncanny.

As coach of the Miami Dolphins Don Shula went to five Super Bowls and won two of them.

As coach of the Miami Heat Erik Spoelstra went to five NBA Finals and won two of them.

In 26 years with Don Shula at the helm the Miami Dolphins only had two losing seasons.

In 13 (going on 14) years with Erik Spoelstra at the helm the Miami Heat have only had two losing seasons.

From 1972-1973 Shula coached the Dolphins to one of the NFL’s longest ever winning streaks of 18 games.

In 2013 Spoelstra coached the Heat to one the NBA’s longest ever winning streaks of 27 games.

I was a long time critic of Erik Spoelstra. I thought those LeBron Heat teams underachieved and should have won four championships with their stacked roster. When Steve Kerr took over the Golden State Warriors and broke the regular season victory record, I was yelling to anyone who would listen, “See, that’s what the Bron-Bosh-Wade Heat should have been!”

Part of it was Spo followed in the footsteps of Pat Riley. Riley oozed of the type of charisma that had great screenwriters writing roles for him. Spoelstra never made a great inspirational quote to the media, nor did he show relatable passion on the sideline.

Instead all Erik Spoelstra did was win.

And over the last three seasons Spo has forced me to reconsider his excellence. With only a single player picked in the top ten of the draft, he took the Heat all the way to the NBA Finals in 2020.  This season he has surpassed that insane level of overachieving. I’d never seen a team have as many injuries as this Heat team, and again all they do is win. Last weekend the Heat went into Phoenix, the team with the best record in the league and whacked them by 23 points.  With players  you’d think were selected by a random name generator like Omer Yurtseven, Max Strus, Caleb Martin, Kyle Guy and Haywood Highsmith, he’s defeating all-stars and future hall-of-famers like Chris Paul and Kevin Durant.

It’s reminiscent of the compliment Don Shula once received from his coaching nemesis Bum Phillips that embodied Shula’s greatness, “He can take his’n and beat your’n and take your’n and beat his’n.” If you put that quote through Google translate I think it means Shula was such a smart tactician and understood football so thoroughly, he could get just about anyone to win a football game.  Spoelstra has remarkably been accomplishing that same feat this season.

South Florida was so enamored with Shula’s  accomplishments that after 14 seasons they named a stretch of freeway the Don Shula Expressway. This summer will mark 14 years of Spoelstra coaching the Miami Heat. What will the city name after Spo?