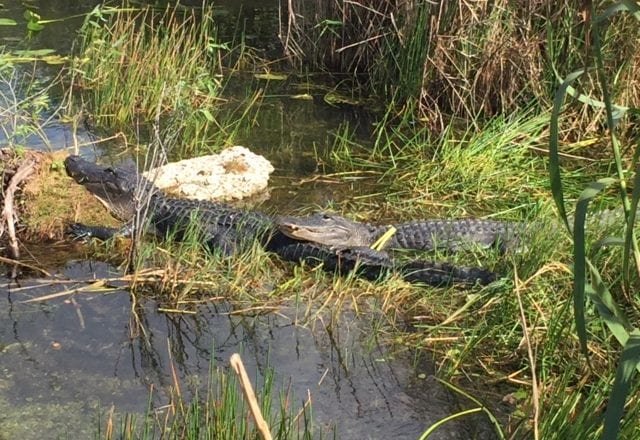 Let’s preface this post by saying the government shutdown is reprehensible.  In a capitalist society not paying workers for services rendered is as low as it gets. For the US Government to hoard tax dollars rather than to divvy it out and pay its workers is a scandal that should not be forgotten or forgiven.

However if you’re still reading after that short rant let’s now try to make some lemonade out of lemons.

During the government shutdown, national parks are not collecting admission fees meaning now is the time all cheapskates can head out to the Everglades without spending a dime.  Where it is normally $25 for your vehicle to enter the park, that rule does not presently apply. It is a little jarring to drive past the ranger station outside Homestead as I did this past Martin Luther Day Weekend and realize  you can cruise right through. You won’t get the customary brochure map that comes with paying your dues, but you do get to see a unique ecosystem for free.

There have been reports of national parks bathrooms being closed and the trash cans overflowing without workers present,  but the Anhinga Trail at the Royal Palm Visitor Center was in pristine condition. Bathrooms were accessible, trash cans had plenty of room for your refuse, and even the gift shop was open for business.  January is an ideal time to visit. The mosquitoes aren’t around while the alligators, fish, and birds are all over the place as you take the short walk around the boardwalk.

Hopefully, our government overlords in Washington D.C. do the right thing and start paying the rangers the wages they were promised soon, but until they do take advantage of seeing our region’s natural beauty free of charge. And if you’re feeling generous you can always donate those saved $25 to The Everglades Foundation  or The Friends of the Everglades.