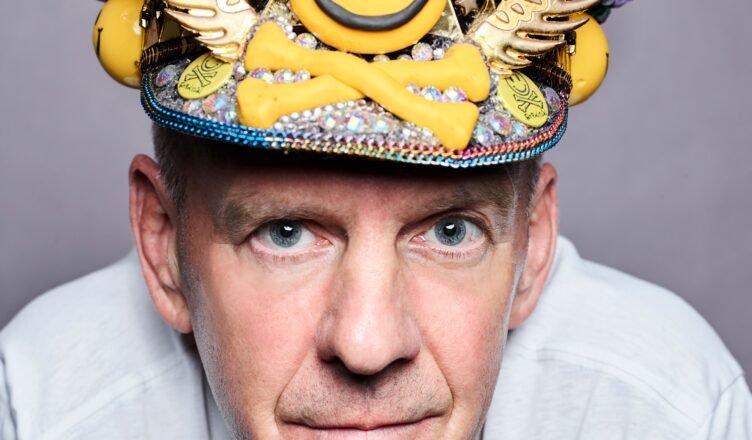 I interviewed Fatboy Slim for Miami New Times in advance of his March 23 appearance at the Masquerade Miami. The legendary DJ gave an interesting interview and since I couldn’t fit all of his quotes in the article, here is the full transcript of our conversation.

When did you fall in love with music?

Fatboy Slim: I was eight years old and The Osmonds came to town. Donny Osmond had his name written on the back of his leather jacket in studs and had a piano that lit up when he played. I thought to myself, “I want a piece of this action.”

You started off playing bass with The Housemartins who were huge in England.

Yeah, that was my introduction to my childhood dream, but I was djing before that. That was my first professional band.

How did you fall into being in a band that had a #1 song in the UK?

Just a school friend. The singer was a friend from school and we used to be in a band together. It’s just an extension of that really.

Was it surprising for a bunch of school friends to find themselves on the top of the charts?

No, it was great. Growing up since I was eight my ambition was to be a musician. It was really exciting. The worst thing was it wasn’t my kind of music. As a suburban white English kid it was thought that was what I should play, but I always liked Black music.

So you were continuing to DJ while in that band or did you put it to the side at the time?

I continued to do it as a hobby. In those days DJing was a hobby, not an occupation. But then other DJ’s I used to play with like Tim Simenon from Bomb the Bass put records out. The big change for me was when they invented the sampler. All of a sudden white kids could make funky music without having to pretend to be Black. That was my lightbulb moment when I realized I was playing music I didn’t really enjoy in a band. While as a DJ I was playing the music I really loved. And all of a sudden DJ’s were being seen more as artistes. So that’s why I left Housemartins because my first love was funk and soul music.

You’ve probably been asked this a thousand times, but I couldn’t find a straight answer. How did you come up with Fatboy Slim as your DJ name?

There isn’t a straight answer. The tenuous link is I loved really dirty, really old blues records. If you were a fat blues singer you’d be called Slim. there was Memphis Slim, Hightop Slim. I just thought Fatboy Slim was an oxymoronic blues singer.

That kind of sense of humor is what helped you break through in America especially in music videos like “Praise You” and “Weapon of Choice”. How important was it for you for your videos to  be funny?

I’ve never taken myself too seriously or have a huge ego about what I do. After making videos in the pop band I was in where you’re always trying to be super cool with some cliches, it wasn’t so much about being humorous it was more about breaking cliches.

During the time of those videos Fatboy Slim was huge. What was the height of the ridiculousness of your fame?

There was a week when I married my wife who was a TV and radio presenter, so we became a celebrity couple. You’ve Come a Long Way Baby was #1 on the charts and I won a Brit award the same week. That’s when i said something big is happening here. I never set out to be in this industry because I wanted to be famous. It was because I loved music and I loved to entertain people. I loved creating music and playing music. I never sought fame. It wasn’t unwanted, but it wasn’t really what I was looking for. It’s not something I was too comfortable with.

Which makes sense since you’re not in the videos for “Praise You” or “Weapon of Choice”.

The great breakthrough for me was meeting Spike Jonze. At that point I’d made some obtuse videos because I didn’t want to play the game. Spike had these ideas on how to break the rules and still make it entertaining. It’s actually more entertaining because you were breaking the rules. That really, really appealed to me. One of the side effects to that was I didn’t have to star in videos any more what sat very comfortably with me. In those days pre-Internet you could be fairly faceless making dance music. Making pop music you had to be in the videos and it was all about how you looked and what clothes you were wearing. Whereas with dance music a lot of people become DJ’s because they didn’t want to stand center stage having people staring at them. In those days DJ’s were just hidden away in the corner of the club. It was a way of expressing yourself musically without having to be a star. EDM came along and completely ruined that model.

Well a lot of EDM stars do like to DJ with masks on.

You’re going to play at Masquerade Miami for Miami Music Week, what can people expect from that show?

It’s a DJ show. After playing bass and guitar in bands I realized I’m a better DJ than traditional musician. I don’t just play my hits. In fact some nights I don’t play my hits at all. I’ve been DJ’ing for 35 years now, so I feel very much a part of that fraternity. It’s a DJ show with my very good friend Claptone who’s hosting that night. I try to help you escape from reality. Escape through the dullness and stress from your normal life.  For a few hours we go into this magical wonderland where everyone’s free and sexy and there’s a great feel for community. If you’re a pop fan who’s heard a few of my tunes on MTV you might be a little disappointed, but if you’re into dance music it’ll be great. I recently played Space in Miami, that’s way more my target audience than  the pop charts.

You’ve played Miami a ton of times. Do you have any Miami show memories?

I’ve played there a hundred times. Obviously the glory days of the Winter Music Conference where all the DJ’s from around the world got together. It was a time when you didn’t see us all in the same room or we never met each other. you heard their records, but you had no idea what they looked like. That was the first time I went to Miami. Hanging out for a week in South Beach hanging out in Nightclubs was my most beautiful time in Miami. Last time I hung out in Miami I was in Wynwood. I love street art.

How do you prepare for a show? Do you have any rituals?

I have to transform myself from Norman Cook who is a 58 year old father of two and a fairly responsible and reasonable kind of bloke and I have to transform him into Fatboy Slim who is this ageless irresponsible party animal. That involves taking off my shoes, putting on a Hawaiian shirt having three cans of Red Bull and just before I go on stage my tour manager slaps me really hard across the face. Though I’m a DJ and I just play other people’s records I try to put as much performance into the show to be a larger than life character so people don’t just see my pressing buttons on the mixer.

You must have an insane record collection. What are your most prized records?

I don’t play vinyl any more so I don’t know. Back in the glory days when everything was exciting and new I used to get acetates, the one off pressings. I’ve got ones from Chemical Brothers and Groove Armada where they actually write a message to me like “I think you’ll like this one, Norman.” And you hear it two months before anyone else does.

What qualities do you look for in a song you remix?

My favorites one are when you hear something in the vocal or in the hook, where there’s a great hook but not enough oomph. My favorite ones are when i take a pop record and make it into a dance record. You keep the hooks of the pop record intact and then you deconstruct it. My most successful one was a tune by Cornershop “Brimful of Asha”. I tried to play it while I was DJ’ing and I was like it’s not fast enough and there’s no bassline. So I sped it up, added a bassline and that was enough to take it to #1. Those are the nicest ones where you know it’s a good tune, but you just need to beef it up.

It’s been a while since you put out a new album. Are there plans for you to release new music in the future?

Not really. As an artist I’ve kind of hit that patch where I’m not sure I have that passion for making tunes that I did the previous thirty years. I don’t see the point of making a new album just because I feel I ought to. I’d rather do things that interest me rather than just for the sake of it. I’m very sporadic with music I’ve just done a tune with Carl Cox. Now you’ll find me working on film soundtracks or curating an art show.

What film soundtracks do you have in the pipeline?

There’s something in the pipeline I can’t talk about, but I love how music can help tell a story. A great film soundtrack is a beautiful, emotional thing. I did a film with Julien Temple, one of my favorite directors, I learned so much from him about how music can tell a story. Which I suppose is very similar to DJ’ing actually. a very clever journalist friend of mine once described it as being a shepherd of moments which I thought really summed up what I do. You take things and round them up and put them in the right form and create a moment for people.