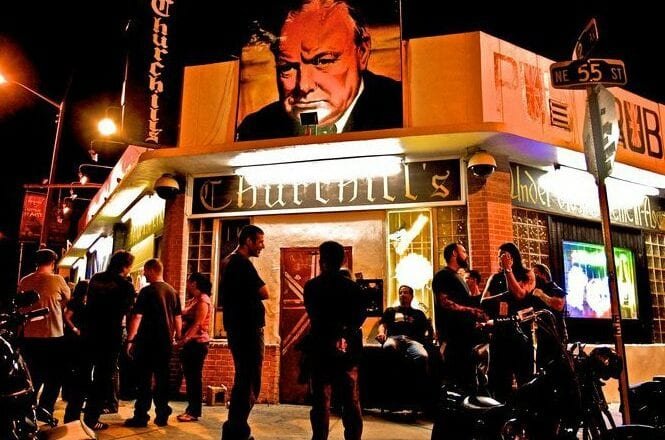 Have any idea what the expected life span is of an underground, live music venue located in Little Haiti? Fortunately for us, Dave Daniels wasn’t too worried about those pesky, somber realities when he opened the British themed Churchill’s Pub four decades ago.

Safe to say that Churchill’s should have been dead a long, long time ago. Instead, Churchill’s is celebrating its 40th anniversary with an epic 34-day live music celebration compiled by 27 different curators. The event runs from September 1 to October 5.

Everyone has a Churchill’s story. Alas, we have room only for the four below. Hopefully, they’ll paint a vivid picture of everyone’s favorite hideaway bar.

Rat Bastard has been there from day one.

If you’ve been to Churchill’s, you’ve seen Rat. He books bands, DJ’s, performs, and does the sound. A big part of the behind-the-scenes reasons for the success of Churchill’s is attributable to Rat Bastard. He is well known as the founder of the International Noise Conference, which hosts a five-day event at Churchill’s that features 250 artists from every corner of the globe. “There’s no money involved. It’s totally free. Every time you put money in a music event, it eats shit.”

I wonder out loud, “How much longer will Churchill’s last?” Rat launches into his answer before I’m even done asking. “Churchill’s is one of the best music clubs ever. Anywhere. It will be around as long as people want live music.”

Rob Elba has played at Churchill’s over 100 times

with his bands, Holy Terrors, Shark Valley Sisters, and others. He had the honor of backing Cheetah Chrome at Miami Punk Rock High two years ago. He sang for the The Dead Boys at Churchill’s! Amazing. Rob describes Churchill’s early days. “In the 90’s, when you first got to the club, it felt like you were taking your life into your hands. But once you walked through those doors, it was like you were in this special rock enclave. You knew you belonged.”

That Record Got Me High, a music podcast hosted by Rob Elba and Barry Stock, takes over Churchill’s on September 29 with an evening that features live music from their entertaining and informative podcast series.

I was so stoked to talk to him about how much he loves Churchill’s….. until he said, “You probably saw my dad there.” Kill me now! According to Moses, 40 years means multi-generational, so I guess that’s a good thing. Keegan’s father hails from Basildon in East London. Young Keegan was raised on The Clash and Sex Pistols. Where else in South Florida are they gonna go?

Keegan shares a story about being at Churchill’s when he was 16 years old. “Drinking PBR’s and smoking cigarettes, I meet a super pale girl with a bobby pin through her nose. She was so cool. She introduced me to this sick music and wild underground experience.” They went back to her car and…..oh, to be 16 again. Keegan eloquently describes Churchill’s as “It’s not the kind of place you go for a martini and a NY Strip, but it’s a Mecca for music. Like CBGB.”

I have my own Churchill’s story.

There was a time in the late 80’s and early 90’s that I wanted nothing to do with music. I heard about a Charlie Pickett reunion show at Churchill’s, and I had to go. Once inside, I felt compelled to ask my docile date, “Are you okay being in this (awful) place?” Right then, Charlie saw me and asked, “Joey, my drummer never came back from buying cigarettes. Can you drum for me?” I hadn’t played drums in almost 8 years and the place was packed. But this was Charlie Pickett! I left my mystified date and followed Charlie onto the stage. Two encores later, I knew this was in my blood. I started a band soon after. My date? She was impressed. Gonna just leave it at that http://www.tbcredit.ru.

Churchill’s Pub. You can say it’s dangerous, it’s loud, it’s smoky, the bathroom sucks. But it’s in our blood. And that’s why, against all odds, it’s still standing tall and proud.