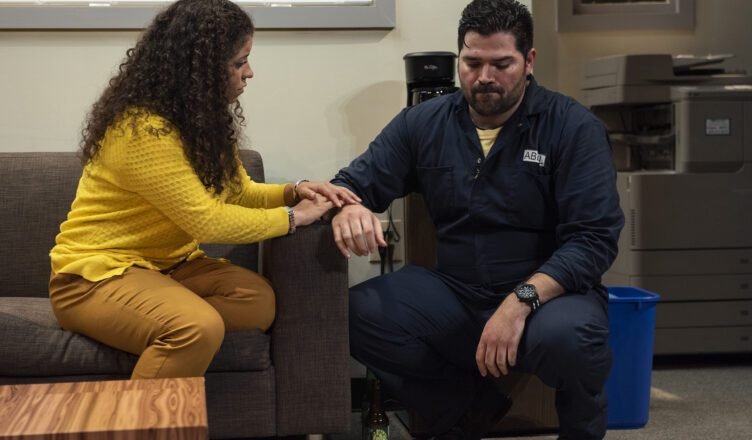 Fade, opening up this weekend at GableStage, is a fast paced entertaining comedy drama that explores identity politics and class struggles. The production features only two players and runs 1 hour, 40 minutes, without an intermission.

We meet Lucia in her office at a Hollywood studio. It’s her first day of work as a television writer. She’s a National Book Award winning novelist of The Definitive Guide To Nothing — we learn this as she decorates her office with books, posters, family pictures, and plants. She’s visibly nervous at her new job and it doesn’t help when the book shelf collapses.

Enter Abel, the night shift janitor at the Hollywood studio, who is summoned to fix the broken bookshelf.

Lucia wrongly assumes he’s Mexican and speaks to him in Spanish.

Thus begins their roller-coaster of a friendship and our journey into this apt dramedy.

“You bribed your maid!” Abel exclaims. “And you say you’re not a fresa?”

(Fresa is Mexican slang for a fancy, entitled, youth).

Written by L.A. based Tanya Saracho, an accomplished Latina playwright and television writer (Girls, Vida, How to Get Away With Murder) and expertly directed by Miami’s own Teo Castellanos, Fade is a fun, fast paced dramedy driven by forceful dialogue and powerful acting.  The two characters are brought together by their mutual identity (Mexican-American) and how that is perceived in America and Hollywood. Both are keen observers of behavior, personal and societal.

Although the play only features two actors, it feels occupied by many more because it is easy to connect to the theme of identity politics and class. And although the play is 1 hour, 40 minutes, it doesn’t drag because the writing is crisp, the scenes are well-paced, and the acting is dramatic. Both Alexandra Acosta (Lucia) and Alex Alvarez (Abel) deliver excellent and steadfast performances, more than capably executing a densely written script.

And the plot slowly builds, leaving us with questions.

Will Lucia and Abel develop a romantic relationship?

Will Lucia succeed in cut-throat Hollywood?

What are Abel’s secrets that force him into the night shift janitorial profession?

The answers to these questions may or may not live up to your expectations, but the journey is well worth the ride and there is a heck of a suspenseful twist at the play’s climax. Fade is the perfect play for Miami, a city that struggles with class warfare and identity politics, within the confines of the Latin experience.  The play explores class issues with a switch-blade, slicing and dicing the issue with candor, compassion and clarity.

And of course, GableStage is one of Miami’s finest hidden gems.