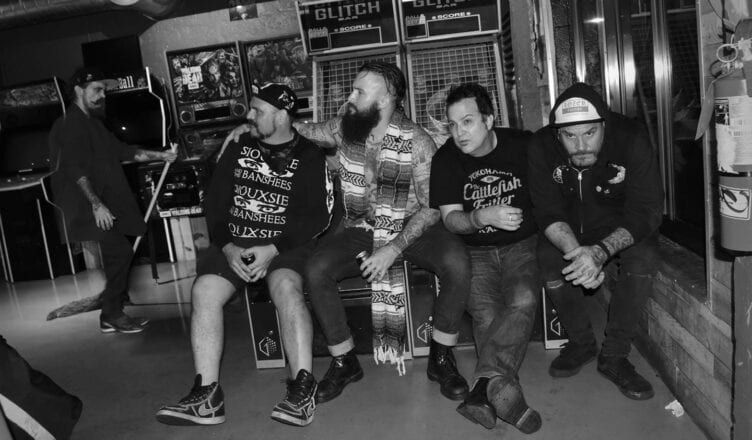 Galore says their primary interests are “Chinese food and malt liquor,” and they’d like you to know their names (stripper names?) in varying levels of completeness… “Did we mention malt liquor?” These Oakland Park boys’ interview responses are about as equally acerbic and carefree as their performance.

Together for only six months at the time of writing, Galore self-identifies as TRASHPUNKHARDCORE from South Florida. Accurate, and easy to love.

The band brings down a brutal, in-your-face beat-down of never-meandering heaviness. Coupled with moments of slugginess, Galore’s sound is a type of vicious-sexiness that reminds me of dragging a cave-babe home by his/her hair.

If the music isn’t nightmare-fuel enough, a (thankfully) shirtless vocalist Wyatt Lawless might push you over the edge. That’s due to his being a six-foot-something military-type shouting out lyrics like “you look fuckin’ tasty” in your undeserving goddamn face. Many first-time viewers have expressions that indicate, they were not prepared.

Upfront you’ll find stone-cold-fox, and absolute deviant Lawless. He can be seen thrashing around the stage like a wild animal who has just been uncaged, and is hungry for flesh. Met by Jared on guitar, Chuck Loose on drums and Will Trev on bass, all babes in their own right. All modeling a rotating display of skateboard-bae hats.

Although currently, you can only find music from Galore in rare and precious places,

like YouTube page SFBandVideos which chronicles much of the live shows that happen in Dade, the band is currently working on their first EP.

With some **unmentioned** members having only slight sureness of their own social media presence when asked, you will find an Instagram that is funnier than most while also often being pleasant on the eyes.

Lucky for us, Galore seems to have shows on a nearly weekly basis. Upcoming performances include August 31 at Lozer Lounge in Pompano Beach and again at the same venue September 13. Be sure to catch them if you can, you won’t regret it.

View all posts by Abbie Bateman →
Support The Jitney on Patreon! We run no ads for a clean user experience. But The Jitney needs gas. Please donate or become a Patron here