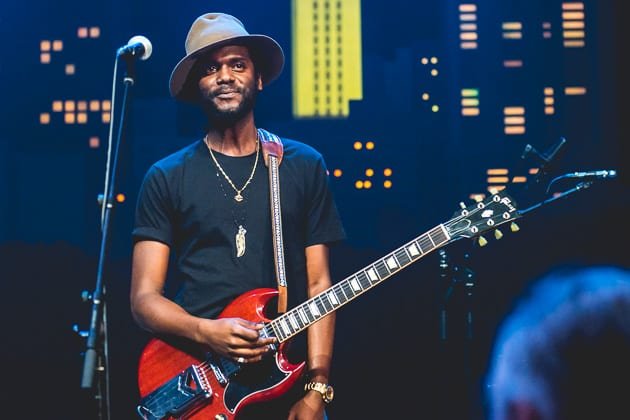 Gary Clark, Jr. on a windy Saturday night in early March. Peak season in Miami. Across the street the lawn of the New World Symphony is filled with people picnicking for the free symphonic wall-cast.

The Fillmore is surprisingly packed early on. The first two tiers reserved for GA and the top Mezzanine level for ticket holders.

Local band Juke opened up with a tight 40 minutes that tuned the crowd up like a mechanic working on a gang of hogs bound for Key West. Funky. Juke never sounded better and it was good Miami vibes seeing them on a large stage.

This guy is a storm.

And the wind is in his guitar. That guitar.

A nostalgic time machine bouncing through dimensions and eras like it is spawned from a Rick and Morty adventure.

Gary Clark, Jr.’s guitar, an assault rifle taking back land from ignorance, deliverance of reparations for the tears of those shot out.

Two songs in, Gary Clark, Jr. says, “This is our first show of the tour and we’re going to play some new stuff for you, Miami.”

The crowd is older and a lot whiter than one might think. Less neo-soul, more gray, muscles, heels. 15 dollar beers and $28 double cocktails in the air, they set sail at 9:45pm for a 120 minute jam cruise.

Songs like “Pearl Cadillac,” “I Walk Alone,” and “The Land” provide powerful personal and political emotion in trying times.

As long as he has that guitar tho.