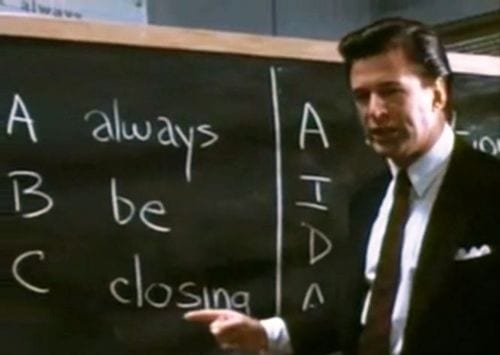 The Miami Dolphins football team is horsing around in the locker room after losing 59-10. Offensive linemen are snapping each other with wet towels, quarterback RYAN FITZPATRICK is in the middle of brushing his beard. Coach BRIAN FLORES is trying to figure out how to program his iPhone XI.

STEPHEN ROSS: Let me have your attention for a moment! Let’s talk about something important. Are they all here, Ireland?

STEPHEN ROSS: You want to waste my time with details? Answer the question.

CHRIS GRIER: Yes, all the Miami Dolphins players and coaches are here.

STEPHEN ROSS: Let’s talk about something important! (to Flores) Put that coffee down!! Coffee’s for closers only. (Flores scoffs) Do you think I’m fucking with you? I am not fucking with you. I’m here on a mission of mercy. Your name’s Flores?

STEPHEN ROSS: You call yourself a coach, you son of a bitch?

BRIAN FLORES: I don’t have to listen to this.

STEPHEN ROSS: You certainly don’t pal. ‘Cause the good news is — you’re fired. The bad news is you’ve got, all you got, just one season to regain your jobs, starting tonight. Starting with tonight’s game. Oh, have I got your attention now? Good. ‘Cause we’re adding a little something to this season. As you all know, first place in the AFC is a Cadillac Eldorado. Anyone want to see second place? Second place’s a set of steak knives. Third place is you’re fired. You get the picture? You’re laughing now? You got players. I paid good money for these players. You can’t win with the players you’re given, you can’t close shit, you ARE shit, hit the bricks pal and beat it ’cause you are going out!

BRIAN FLORES: The players are weak.

BRIAN FLORES: Like I said the players you got us are weak.

RYAN FITZPATRICK: You own the team? What’s your name?

STEPHEN ROSS: Fuck you, that’s my name!! You know why, Mister? ‘Cause you drove a Hyundai to get here tonight, I flew a helicopter. That’s my name!!  And your name is “you’re wanting.” And you can’t play in a man’s game.

RYAN FITZPATRICK: You’re such a hero. Why you coming down here and waste your time on a bunch of bums?

STEPHEN ROSS: You see this watch?

STEPHEN ROSS: It doesn’t work. It hasn’t worked in years, but I keep it cause I paid a lot of money for it.  You see, pal, that’s who I am. And you’re nothing. Nice guy? I don’t give a shit. Good father? Fuck you — go home and play with your kids!! (to everyone) You wanna work here? Win! You think this is abuse? You think this is abuse, you cocksucker? You can’t take this —  You don’t like it — leave. I can go out there tonight with the players you got, make myself twelve wins! Tonight! In two hours! Can you? Can you? Go and do likewise! The wins are out there, you pick it up, it’s yours. You don’t, you’re going to be shining my shoes. Bunch of losers sitting around in a bar. (in a mocking weak voice) “Oh yeah, I used to be a coach, it’s a tough racket.”  I’d wish you good luck but you wouldn’t know what to do with it if you got it.

BRIAN FLORES: Yo Grier, what was that about? I thought we agreed we were going to lose all our games this year.

CHRIS GRIER: Yeah, but Mr. Ross has been spending a lot of time with Donald Trump. The President makes fun of him for how bad we are. You think maybe next week you can lose by a little less?