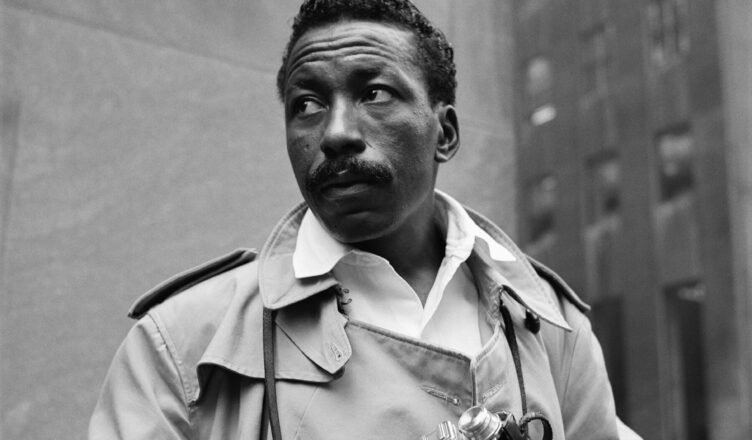 As we mourn the loss of pioneering actor Sidney Poitier, who died in Los Angeles at age 94 on January 6, 2022, there have been many tributes to his accomplishments despite harsh encounters with racism and discrimination in his early years. These tributes bring to mind my memories of another trailblazing, multi-talented Black artist, legendary photographer Gordon Parks (1912-2006). Though perhaps most widely known for his photojournalism during the 1940s through the 1970s, Parks was a distinguished film director and writer as well as a composer.

The soaring careers of both men played out during the civil rights movement and added to its momentum. Both made landmark contributions to their art, even as their historic legacy was forged in the crucible of systemic anti-Black racism. In 1999, Parks shared with me memories of his own battles against racism. I will never forget meeting him then at the Norton Museum of Art in West Palm Beach, where I was covering “Half Past Autumn,” a traveling retrospective of his photography, films, and music, for the Miami Herald. Here is my story about Gordon Parks, taken from my personal archive of my work as an art critic for the Miami Herald.

His Weapon Against Poverty, Racism Was a $7.50 Camera

His manner is more affable than angry now. Call it a generous charm, though one spiked with steely determination. And he’s a natty dresser to boot, telling stories while decked out in a navy blazer. An ivory handkerchief that nearly matches his white mustache is tucked with saucy style into his breastpocket. But outrage lingers in Gordon Parks’ low, raspy voice – a voice that wavers at times in deference to the tolls and triumphs of his 87 years.

It was that outrage that inspired and informed a remarkable career as a photographer, writer, composer and filmmaker – a career so important and prolific, thousands of his photos and manuscripts now rest in the Library of Congress. A career so remarkable that it was launched with a second-hand camera purchased in a pawn shop 61 years ago but is now being honored in Half Past Autumn: The Art of Gordon Parks, a traveling retrospective of his photographs, films and music.

But back then, back where it all started, Gordon Parks simply remembers being angry; so angry, he stomped out of a department store when clerks couldn’t – or wouldn’t – come up with a single coat his size. The time was 1942 and the place was Washington, D.C., recalls Parks. It was his first trip to the capital and he’d just arrived from Chicago, where he’d been photographing South Side slums and high-fashion women, the kinds of beautiful and desperate subjects that would capture his lyrical imagination and laser-sharp social conscience for decades to come.

As a shopper on the mean streets of Washington, he was on “a very strange assignment, ” he tells his audience, a group of reporters on hand to preview the retrospective. Parks’ assignment came from his new boss, Roy Stryker, director of the Farm Security Administration (FSA), an agency President Roosevelt had set up to help poor farmers. To muster support for these efforts, Stryker hired photographers like Walker Evans and Dorothea Lange to call attention to the farmers’ plight – and the photographers responded with landmark images of Depression-era inequities.

Parks first saw the photos in a magazine left on the North Coast Limited, where he was working as a railroad waiter. It was a job he’d gotten after a gig playing piano in a brothel.

The stark, tragic images excited him so much he soon found himself in a Seattle pawn shop looking for a camera. Then he found Richard Wright’s 12 Million Black Voices, an attack on bigotry illustrated with FSA photos. Wright’s book became his Bible and the camera unleashed his powerful voice.

It was, he allows, “not much of a camera, but for $7.50, I had purchased a weapon I hoped to use against a warped past and an uncertain future.”

His weapon had gotten him work in Chicago, and a fellowship with the FSA he so admired. And now, before Stryker sent Parks out and about in the United States – to destinations that included Daytona Beach – he was sent out to experience Washington.

“Put your camera on the shelf, ” Parks says Stryker told him that day. “Go to Julius Garfinkel’s department store and buy yourself a topcoat, and there across the street is a restaurant. Go in there and get some lunch, and catty-corner across the street is a theater . . . come back and give me a report on what you thought of that picture.”

But the picture to see and report on, he would soon learn, wasn’t the movie playing at the theater. It was the one playing in the hearts of minds of men.

At Julius Garfinkel’s, for example, nobody even tried to find a coat that would fit a black man, Parks remembers.

“So, in disgust, I stretched my little black body out on this white chaise longue and said ‘Go get the manager.’ When the manager dithered about how busy the store was during war time, Parks snapped, “Well, there’s nobody on this floor but me. I wouldn’t take that coat if you gave it to me.”

At the restaurant, he says a waiter approached him with this reproach, “Don’t you know Negroes can’t eat in this place? If you want something to eat, you have to go around back . . .”

Still, that was better than Parks did at the movie house. “I didn’t even get into the theater, ” he remembers.

It was the pivotal moment of his career – and a pivotal moment in the long, unsteady history of race relations in the United States – for it inspired the high-powered images of poverty that became Parks’ trademark.

“He was always looking at things that needed to be looked at, ” says University of Miami communications professor Michael Carlebach. “Things that were right there in front of us, but that nobody had paid attention to.”

American Gothic, among his most famous photographs, depicts Washington, D.C., charwoman Ella Watson standing with mop and broom in front of a huge American flag. She gives us an uncompromising gaze, the tools of her dead-end trade lining up with Old Glory’s stripes.

“For its time, it was an image that talked about racism in this country in a way no other picture did, ” says Philip Brookman, curator of photography and media arts at the Corcoran Gallery of Art in Washington, D.C., which organized the Parks exhibit. “Here’s a woman working for the U.S. government, posed exactly like the American farmer in [Grant] Wood’s American Gothic. The farmer is considered to be an icon of everything good in American culture, and yet the black woman is an ambiguous image, with the feeling of people being exploited.”

Coming from Chicago, where Wood’s famous 1930 painting of the pitchfork-wielding couple hangs in the city’s Art Institute, Parks acknowledges that Wood’s painting was “a mild influence” on his image.

“But actually, ” he adds by phone from his Manhattan apartment, “it was an indictment of America. I tried to do something that would show my anger . . . I had no idea it would turn out to be so popular.”

The popularity, however, would come later. At first the photo was considered too provocative to be shown.

“Well, you got the idea all right, ” Parks remembers an approving Stryker saying when he saw the picture. “But you’re going to get us all fired.”

So the photo was hidden away. “Years later, ” recalls Parks, “I was on a plane from New York to Hollywood and there it was, American Gothic, in The Washington Post. When I got back to New York I jumped straight on the shuttle to Washington and went down to the Library of Congress and got my picture.”

In Hollywood, he blazed more new ground. The man whose silky shots of Parisian haute couture for Harper’s Bazaar and Vogue made him the first black photographer at Conde Nast, whose 1952 move to Life made him that magazine’s first black staff photographer, became the first black director to produce and direct a major feature film with his 1969 movie The Learning Tree – a film that takes its title from Parks’ 1963 novel based on his boyhood in Fort Scott, Kan.

The main character “is like other boys, no matter what the color or place or time . . . Bruised by [the world], he learns from it nonetheless. The film remains a lyrical and eloquent statement on the black experience in America, ” writes film historian Donald Bogle.

As he talks, he looks back on a life so dramatic it, too, could have been scripted in Hollywood. There was the time in 1961, for example, when he traveled to the mountainside slums of Rio de Janeiro. This was, he wrote later, “dead center in the worst poverty I have ever encountered.” There he photographed Flavio da Silva, an asthmatic 12-year-old caring for seven younger siblings who became the subject of one of his most famous Life stories. Readers were so moved they sent in more than $30,000 to bring Flavio to the United States for medical treatment and to buy the da Silva family a new home.

As the civil rights movement gathered steam, Parks spent time with the black Muslims in New York and the Black Panthers in Berkeley. He photographed their leaders for Life, striving to balance journalistic integrity with his sympathy for what he called “the heart of black fury sweeping the country.”

Parks himself was moved when an initially skeptical Malcolm X asked him to be his daughter’s godfather. In Parks’ storied life of peaks and valleys, he fell in love with the art and beauty of Paris, buried his parents in a still-segregated cemetery in Kansas, and met and photographed princes and paupers, including Alexander Calder, Ingrid Bergman, Richard Wright and Muhammad Ali.

Now divorced – he was married three times – Parks has raised four children, losing his eldest, the filmmaker Gordon Parks Jr., in a plane crash in 1979. He is a grandfather and great-grandfather several times over.

“My family is mixed up with all kinds of races, ” he says. “I’m part Cherokee, part black. Jewish people have married into my family. One of my wives was Chinese, two great-grandchildren are part Swedish. It’s a grand mixture.”

Known to friends as an enthusiastic cook and tennis player, Parks continues his literary life. He’s at work on his 17th book, a novel based on the rags-to-riches life of English 19th Century landscape painter J.M.W. Turner – whose “absolutely smashingly beautiful” watercolors have influenced Parks’ latest dreamy abstractions.

“I deserve a little time to myself to look at the beauty in the world, after those years of looking at poverty and discrimination, ” says this Renaissance man, whose days still include time for playing the piano. “The most important thing is that I find poetry in everything I do.”