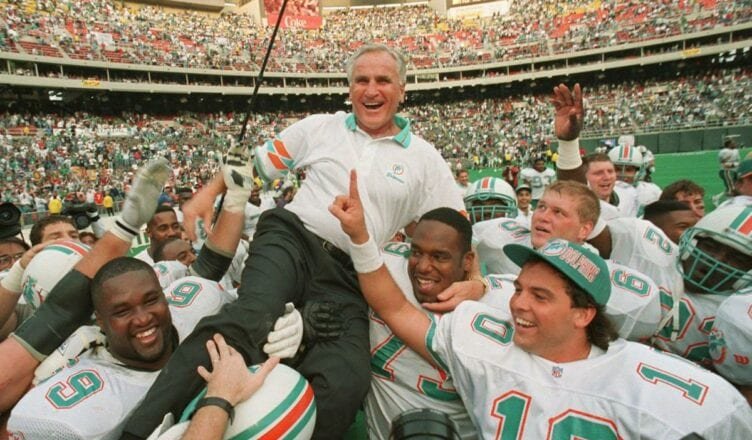 For those of you too depressed to watch  the Miami Dolphins lose by over twenty points every Sunday, HistoryMiami has a great alternative for you to get your football fix. From September 28 through Super Bowl Sunday on February 9, 2020 they will be exhibiting Gridiron Glory: The Best of the Pro Football Hall of Fame.

The traveling exhibition has been featured in every Super Bowl city since  2012 and with Super Bowl LIV (not to be confused with Club LIV), taking place at Hard Rock Stadium next year, the historic memorabilia made its way to Miami.

Gridiron Glory takes over the entire top floor of HistoryMiami with gear and mementos that will make football fans of any age nostalgic for the heroes they grew up with. They have a program from Red Grange’s first game, a Steelers helmet worn by Mean Joe Greene,  and a 49er’s jersey worn by Steve Young.

They have a special room devoted to our hometown team that will be proof to anyone under 25 that the Miami Dolphins were once actually good. You can gawk at Larry Csonka’s cleats, Bob Griese’s playbook, Dan Marino’s jersey, and most interesting of all, Coach Don Shula’s gameplan from a 1993 game when he became the NFL”s most winningest coach where you can read a description of audibles and hand signals. While much of the information written throughout the exhibit can be easily attained by anyone with access to the internet, for NFL fans there is something awe inspiring about standing inches from artifacts that once brought you so much excitement.

Another fun feature is they have a corner devoted for you to live out your inner Olindo Mare where you can use a virtual reality machine to simulate field goal kicks or emulate Cleo Lemon and try to throw spirals into a tiny pocket.

So while as long as Stephen Ross owns the team every Sunday might be a kick in the teeth to Dolphins fans, Gridiron Glory will transport you back to happy days where a pro football game was something Miami could look forward to watching.