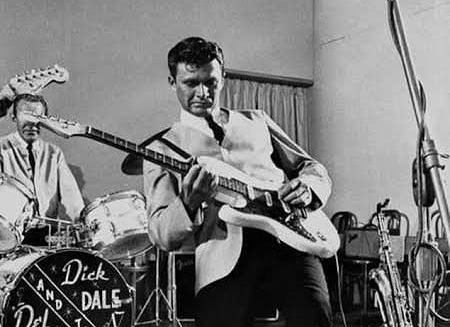 Nineteen-Sixty was the year the electric-guitar conquered the world. There was no escaping it.

The electric guitar began replacing toy machine guns as the hottest new fad item for boys, just as the Barbie doll did something similar for girls. The electric guitar—perhaps as an icon of western culture—might even have been one of the U.S. state department’s secret weapons in beating back communism.

That same year Jacksonville high-school student Walter Eaton, like thousands of others, got bit by the guitar bug.

The electric-guitar deluge had actually been gathering for decades, pioneered by jazz greats Charlie Christian, Les Paul, Barney Kessell and others. It also became an integral component of country music with major players such as Nashville’s Chet Atkins and Hank Garland along with Bakersfield’s Buck Owens and Don Rich. African American guitarists such as Chuck Berry, Bo Diddley and Buddy Guy embraced the electric guitar; it became de rigeur in Chicago-style blues bands.

In 1958, Duane Eddy took the fetishization of the electric guitar even further with “Rebel Rouser.” He also had a hit the following year with “Peter Gunn,” a guitar-drenched rendition of Henry Mancini’s theme from the popular TV series.

England and Europe jumped on the bandwagon. In 1960, British guitarist Bert Weedon recorded “Apache,” which was quickly covered by the Shadows featuring Hank Marvin, who would go on to become a UK legend. However, the biggest version of the tune was recorded that same year by Danish jazz guitarist Jorgen Ingmann and released a year later in the US by Atlantic Records. While Weedon’s original version of “Apache” sounded like something from a spaghetti western, Ingmann’s version evinced a faux-flamenco rhythm guitar behind two electrics—one low, another high—playing call-and-response melodies. It was a guitar smorgasbord, and it became a huge hit, rocketing to Number Two in Billboard’s pop chart.

Also in 1960, a quartet from Tacoma, Washington, remade a 1954 tune by jazz guitarist Johnny Atkins called “Walk, Don’t Run.” It had also been recorded in 1957 by Chet Atkins. The Ventures’ version would become a classic—as well as a staple in every young guitarist’s repertoire, including Walter Eaton’s.

Since by his own admission Eaton, then aged 15, was not a very good player, he felt his only option—since no local band would have him—was to form his own group, which he dubbed Leroy and the Monarchs (Leroy being his middle name). Eaton was savvy enough to recruit a more talented guitarist: 13-year-old Paxon Jr. High student Jimmy Amerson.

Back in Los Angeles, Dick Dale, a son of middle-eastern immigrants who had moved west, had taken Duane Eddy’s guitar mystique a step or two further: he turned the electric guitar into a sort of voodoo talisman. An avid surfer, Dale combined his love of the sport with his love of the electric guitar, reinventing it as a symbol of beach culture while styling himself “king of the surf guitar.”

His first record, released on his own Del-Tone label in 1961, was “Let’s Go Trippin’,” widely considered the first “surf-rock” hit. “Let’s Go Trippin’” was a simple, three-chord rock ‘n’ roll number that peaked at Number 60 in early 1962. It’s significance, however, cannot be gauged by its chart position.

The surfin’ sound had taken the electric guitar to exciting new vistas and inspired dozens of young bands. For one example, a section of “Let’s Go Trippin’” became the foundation for the 1963 instrumental hit “Wipe Out” by the Surfaris, which in turn became a standard item in any budding guitarist’s repertoire and a staple of garage bands nationwide.

Dale might have gotten the idea to do something similar to “Apache” when he recorded “Misirlou,” a ubiquitous middle-eastern folk melody that had been done as a pop record in 1946 by pianist Jan August. Dale’s 1962 version was heavy on sixteenth-note tremolo runs and got him a good deal of attention as a guitar wizard—the Eddie Van Halen of his era.

Dale inspired countless guitarists, including one Carl Wilson, whose group, the Beach Boys, would figure out how to combine Dale’s surfin’ sound—which was entirely instrumental and guitar-based—with pop songcraft. The Beach Boys did remakes of both “Let’s Go Trippin’’ and “Misirlou.”

Surfing became—and still is—a popular sport in Florida even though the waves are not half as big as those on the West Coast. The surfin’ sound became the soundtrack to the “salt life.” It also became an inspiration for hundreds of Florida guitarists who busied themselves learning “Walk, Don’t Run,” “Wipe Out,” and “Pipeline” (a 1962 hit for California group the Chantays, later covered by the Ventures). These tunes became standards not only in the surf-music canon but mandatory items for any students of the electric guitar.

One such guitarist, Charles “Tiny” Tackle, from Jacksonville’s Northside (not far from Eaton’s neighborhood), would get so good at replicating Dick Dale’s sound and style that he formed his own group called, appropriately, Tiny and the Surfers. The Surfers included Gary Hadden (Tackle’s half-brother) on rhythm guitar, Norman Ford on bass, John Roberts on drums and Donn Finney on sax, an instrument not usually associate with surfin’ music. This group would in turn inspire many other groups.

Eaton’s group, Leroy and the Monarchs, with the addition of singing drummer Dennis Yost, became known as the Classics IV. After abandoning the guitar fad and turning to a more easy-listening style, the group scored a nationwide number-two hit, “Spooky,” in early 1968, proving that proficiency and dedication could lead to fame and fortune—an escape from workaday drudgery—even in a predominantly blue-collar city like Jacksonville, where such fantasies were generally discouraged.

Nonetheless, over the course of the next three decades, guitar fever would take hold of Jacksonville. The city would eventually assume its place alongside Los Angeles, London, Detroit, Chicago, Nashville, Atlanta, Memphis, Macon and Muscle Shoals as one of the great guitar towns. The list of famous guitarists who lived and worked in Jacksonville would grow to include Auburn Burrell, Robert Conti, Dickey Betts, Duane Allman, Allen Collins, Ed King, Randall Hall, Dave Hlubek, Duane Roland, Erik Lundgren, Ace Moreland, Wes Borland, Derek Trucks and many others.