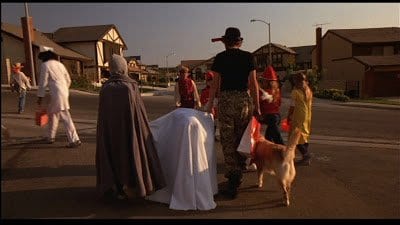 I’m not a huge believer in conspiracies, but how can anyone not see who’s behind that vicious rumor about the crazies who put razor blades in the apples of unsuspecting trick or treaters? When I was a youngster we were told not to accept unpackaged candies, because then Charles Manson, Ted Bundy, and other assorted boogymen could poison us. But I’ve never read a newspaper article or seen a news report of such an incident actually taking place. I always figured this paranoia was a marketing ploy by Hershey, Nestle, and M&M/Mars to avoid any competition.

I won’t let Willy Wonka and the rest of the big candy conglomerates ruin the purest of American holidays. No religion made more palatable with materialism, no patriotism made more risky with the combination of alcohol and fireworks, no dead turkeys, just mischief and masquerades.

I’m a little confused about whether  Halloween was always an adult’s holiday. When I was a kid it seemed grown-ups didn’t dress up, now you go to a costume store and there’s more grown up sized costumes then ones for kids. But of course in the twentieth century adults didn’t play video games either. Is my generation’s adolescence going to extend until we’re in retirement homes?

But I’m more intrigued by the underused trick facet of trick or treat. Halloween is a great time for pranks. People don’t have their guards up like they do on the first of April. Drive by eggings, shaving cream fights, and all other sorts of shenanegans are afoot. Linus is still waiting in the pumpkin patch years later because Lucy once told him about the Great Pumpkin.

One time I was at the doctor right around the end of October. The doctor  recounted the Octobers of her youth and the mother of all Halloween pranks that might let the candy companies off the hook on why we now take our kids trick-or-treating in shopping malls rather than around neighborhoods.

According to the doctor her brother went to this one house that was out of candy. So instead they offered him fruit. The brother got real peeved as the night went on, so he stuck a needle in an apple and took a bite. “Oh, my God, Dad look!”

He blamed it on the house with no candy. Dad was dutiful and called the police. The police questioned the neighbors who were in shock of the accusation. Finally, they questioned the kid. They put a lot of pressure on him and he finally confessed to making the whole thing up. The detectives knew it had to be a lie. No kid would eat an apple on the night of Halloween when he’s got a full bag of candy.