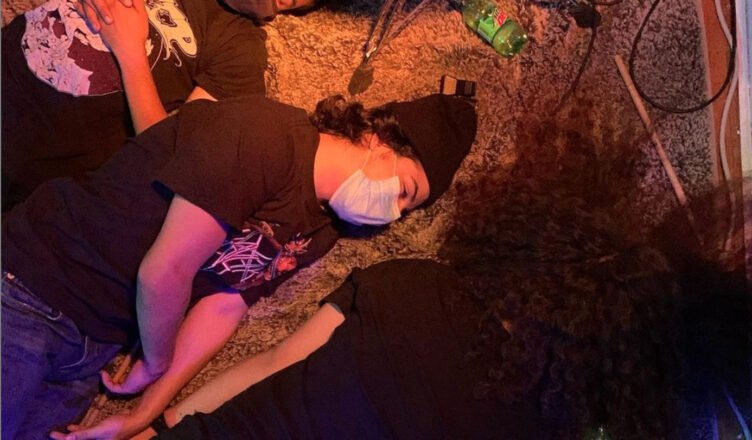 It was August 2018 we’re set to play with this band Headfoam. Our friend Simon wouldn’t stop telling us about this three piece. We got booked with them for a backyard show, which sorta made me nervous for that time.

It was the Tuesday of the show and I was rushing through a project and I cut the side of my wrist with a pretty gross two inch long slash, needing I think 18 stitches, and boom the morning went from half asleep to “don’t fall asleep”

Our part of that show got cancelled. But yeah that’s that. We got a chance to ask them a few questions, and so here we go with them and that.

Alex: Scribbled a couple of band names for fun. This one I saved made the cut.

Rafael: I dunno. | got in the car one day and Alex had decided that was it. And we all love it. Any time anyone asks us about it we kinda let them give it its own meaning. I usually kinda just think about the foam on a beer though.

Luis: Alex made a long list of potential names. it was between Mongo Kushers and Headfoam so that’s that.

Alex: it’s changed over the years. Our good friend Carlos has let us practice at his house for the meantime. Very grateful, and writing the music usually comes spontaneously out of us and then we structure and grow from it. I wrote the majority of the song but we all bring great ideas to the table.

Luis: l guess weekends, we come together and share whatever we got.


If you can have a guest musician play with you who would it be?

Rafael: Bad Brains era HR. One song, doesn’t even have to be original. I just wanna see that guy go fuckin wild and be a part of that energy.

Rafael: Practicing once a week at the homie Carlos’ house. Big shout out to him. He’s been a massive help in making Headfoam what it is at this point and helping us out through the pandemic. As far as writing songs goes either Alex calls me or shoots a riff through text. Or I’ll come to practice with an idea and we’ll just hash it out from there, really.

Tell us about your next album. When can we expect it?

Alex: Our first full length album is coming out this year in the next couple of months. A lot of  new songs and a couple old ones. Over all something to keep an eye on.

Rafael: Soon. Very soon. We’ve put a lot of time into it, and I feel its really gonna show where we are as a band and where we can go from there. Shit’s gonna be. S| C K.


Where do you come from?

Rafael: My grandparents came from Cuba, and I take a lotta pride in that , but as far as where I was born? 305 baybeee. Till I fuckin die.

Rafael: I impulsively bought the Specials first album on vinyl without even owning a record player.