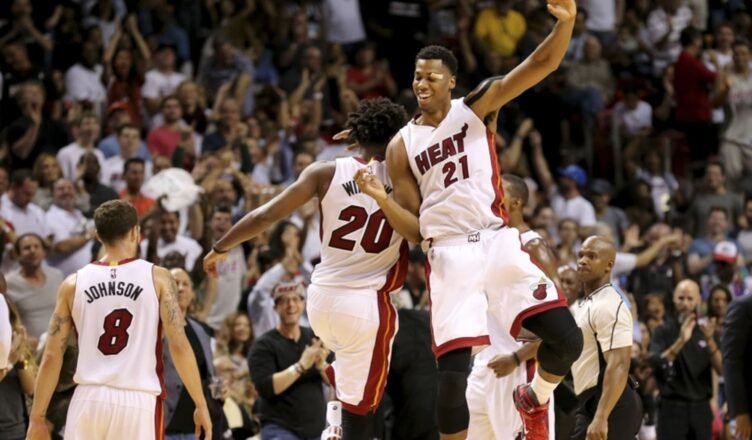 Heat Culture is one of the best in the Association.

The Miami Heat fan base might just be the loudest in the world right now. Have you heard the cheers of “Let’s Go Heat” at opposing arenas? It’s a real thing — game after game after game.

I used to think the second and third year Lebron teams were my favorite Heat teams ever.

Then it was the bubble year, for sure.

But now, this squad, by far, is my favorite Miami Heat team ever. The depth is insane. The balance of savvy vets (Lowery, Tucker, Butler, U.D.) mixed with coming-of-age superstars (Bam & Herro), plus our emerging rock stars (Yurtseven, Vincent, Martin and Strus) — we’re just all that.

But remember, even if we lose some budding talent, they won’t fare better elsewhere.

Here’s a quick list of five Heat players we developed whose careers tanked when they left Miami Heat culture.

We loved them when they were here.

Tyler Johnson, the scrappy point guard who once garnered a 90 million dollar paycheck from the Heat, arrived in Miami a pimply teenager. He played rough and tumble Heat ball, lost a tooth or two along the way, earned our love and (arguably) a paycheck, but after that it was all downhill. Since leaving the Heat, Tyler Johnson has pin-balled around Phoenix, Brooklyn, Philly and now San Antonio.

Justise arrived with much fanfare and hype. First round pick, #10.  There was a Sports Illustrated cover with him and DWade. Heat fans dressed up as judges, cheering him when he scored or stole a pass. Where are they now? Since leaving the Heat, Justise has not been served. He’s only played in 74 games since being shipped out of Miami to Memphis then the Clippers and finally Portland.

There was a season when Josh Richardson was the Heat’s number one scoring option, averaging 16.6 points. The scrappy 2nd round draft pick was beloved when in Miami and the Heat got the most out of him. Since leaving he’s bounced around from Philly to Dallas then to Boston and is now lost in San Antonio.

DJJ with the Heat was an acrobatic freak, blocking shots out of nowhere, flying through the air — he appeared in the NBA dunk contest. He left with little fanfare and is now wasting away in Chicago.

The Heat elevated Hassan Whiteside from the YMCA to leading the league in rebounds and blocks. (Literally the plot of Hustle, but with a tint of North Carolina). We made Whiteside a $100 million dollar man. Hard to believe, right? After a rough tenure with the Heat, Whiteside bounced around to Portland and now Utah. Though he is threatening to come back to Miami.

If the Heat lose any of our promising young core, don’t fret — if recent history is an indicator — they won’t get better away from Heat culture.