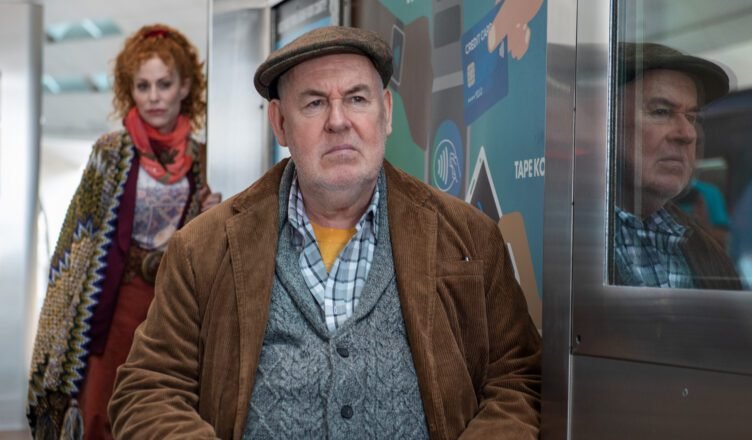 Months ago, when GableStage announced its 2022-23 season, Heisenberg (its first play of the season) jumped off the page. The name has pizzazz and a certain cachet. Certainly, any fan of the Breaking Bad universe would immediately think of Walter White’s alter-ego, the notorious Heisenberg — this play is not about Walter White or Breaking Bad, not close.

Heisenberg the play by Simon Stephens is a love story between two polar opposites. First produced in NYC in 2015, the story is set in modern London, with a scene in New Jersey.

Georgie Burns is a hyper, fast-talking, quizzical, nymph, played to perfection by Margery Lowe. She’s a sizzling firecracker with no boundaries, manic at times, in her body language and diatribes. She’s pure movement, in many ways, impossible to hold down.

Alex Priest (Colin McPhillamy) is the polar opposite, also played to perfection, he’s a stoic man, sullen, downcast, defensive yet steadfast. He’s a 75-year-old man, (33 years older than Margery), a retiring butcher, never married, with no kids. But Priest is a man who’s experienced a lot of loss, like a lot of loss, but it’s all long gone and buried in the past. And he’s stuck, in many ways.

This is the “uncertainty principle” the play is named for.

Werner Heisenberg was a German chemist and father of quantum physics. His “uncertainty principle” basically states that it’s impossible to measure both the position and speed of a particle. In other words, in human terms, if we know where you are, you aren’t really moving, so you’re stuck. If we only see your speed, or how fast you’re moving, then we don’t know your position, or where you are.

It’s kind of fascinating if you think of that principle and relate it to the human condition and the relationships we have in our life. Usually, one person is stuck (in a loveless marriage or relationship, in a stagnant career or job) and the other one is moving, often without direction.

Heisenberg the play is a thinker. It’s bizarre and quirky, fast paced and eclectic. An intimate curious portrait of the inner dynamics of human relationships. Dense in dialogue, Heisenberg is as entertaining as it is unsettling. One of the weirdest love stories you’ll ever see on a stage.

Heisenberg shows us how fragile the human condition is. This play, executed to perfection by GableStage, dissects that truth down to subatomic levels. Don’t miss this one. It’s a doozy.

Actor Colin McPhillamy was an original cast member of one of the best plays produced in the last 10 years, The Ferryman. That play crushed London and Broadway in 2017-18 and starred Paddy Considine, among others, who just played King Viserys in HBO’s wildly popular House of the Dragon.