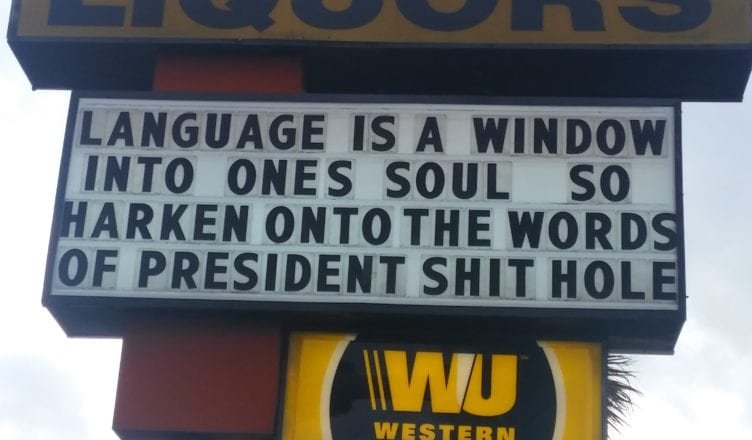 Here in Hialeah, it’s hard to miss the brazen billboard at M&M Package Discount Store on the corner of SE 8th Street and Lejeune Rd. The sign features a series of raucous political poems that are refreshingly left-winged in this conservative majority town. For roughly the last twenty years, co-owner Robert Gewanter, AKA the “Licker Poet,” has made it his mission to “entertain, amuse, irritate and educate” those who bother to look up.

The Miami Herald once referred to his poetry as “doggerel.” Miami New Times named him “Best Political Poet in Miami” and praised the billboard as “Best Roadside Sign.” Hialeah Mayor Carlos Hernandez stopped by the store, shook his hand and called him an “icon” after becoming the subject of one of his scornful rhymes. When researching the Hialeah Racetrack, Tom Wolfe stopped by in a seersucker suit for a chat. Gewanter’s poetry has incited quasi-death threats, angry phone calls, and hate mail, but also appreciation and chuckles.

In person, Robert is nondescript, yet humorous and witty. A graduate of Miami Beach High, he graduated from Johns Hopkins University at the age of nineteen with a degree, in “Natural Sciences and Unnatural Acts,” but returned home to help run the family business with his brother Allan. In the past twelve years, he’s taken a ½ day off work.

Gewanter has no formal training in poetry and is challenged by size limits to sixteen to twenty words. Conventions like grammar and spelling take a hit, but the language is familiar in this era of text messages and internetspeak. “I’m the original Twitter,” he noted wryly.

In the current political climate, too many opportunities to criticize local and national politicians and their scandals present themselves. “With Trump, it’s hard, because as soon as I get something framed out, something new happens,” he said.

When I asked what motivated his work, Gewanter quoted anti-Nazi German dissident Dietrich Bonhoeffer, “Silence in the face of evil is itself evil…Not to speak is to speak. Not to act is to act.”

If some find his poetry offensive, Gewanter says what’s happening in the nation is offensive. “I regret,” he said, “I have but one billboard to give to my country.” He concedes that the poems may affect his bottom line, “I think in the balance it may work against me. Business is slow. There’s no one to censor me.”

This time of year, the store usually runs a billboard that reads, “Halloween in Hialeah is redundant” But with critical midterm elections looming, there’s a new poem this year. “Not funny, not ribald or shocking. Just a public service message of sorts.” 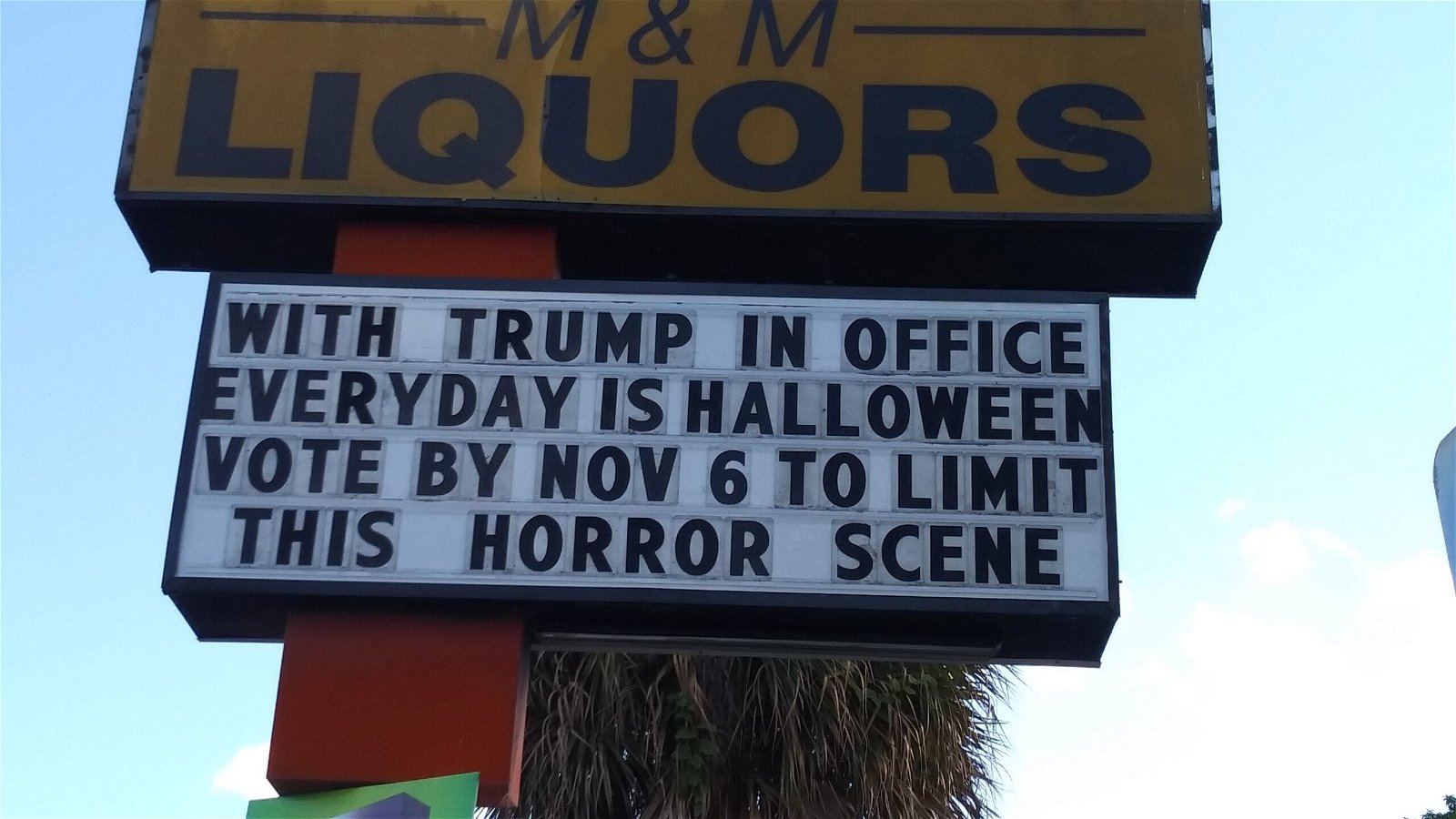 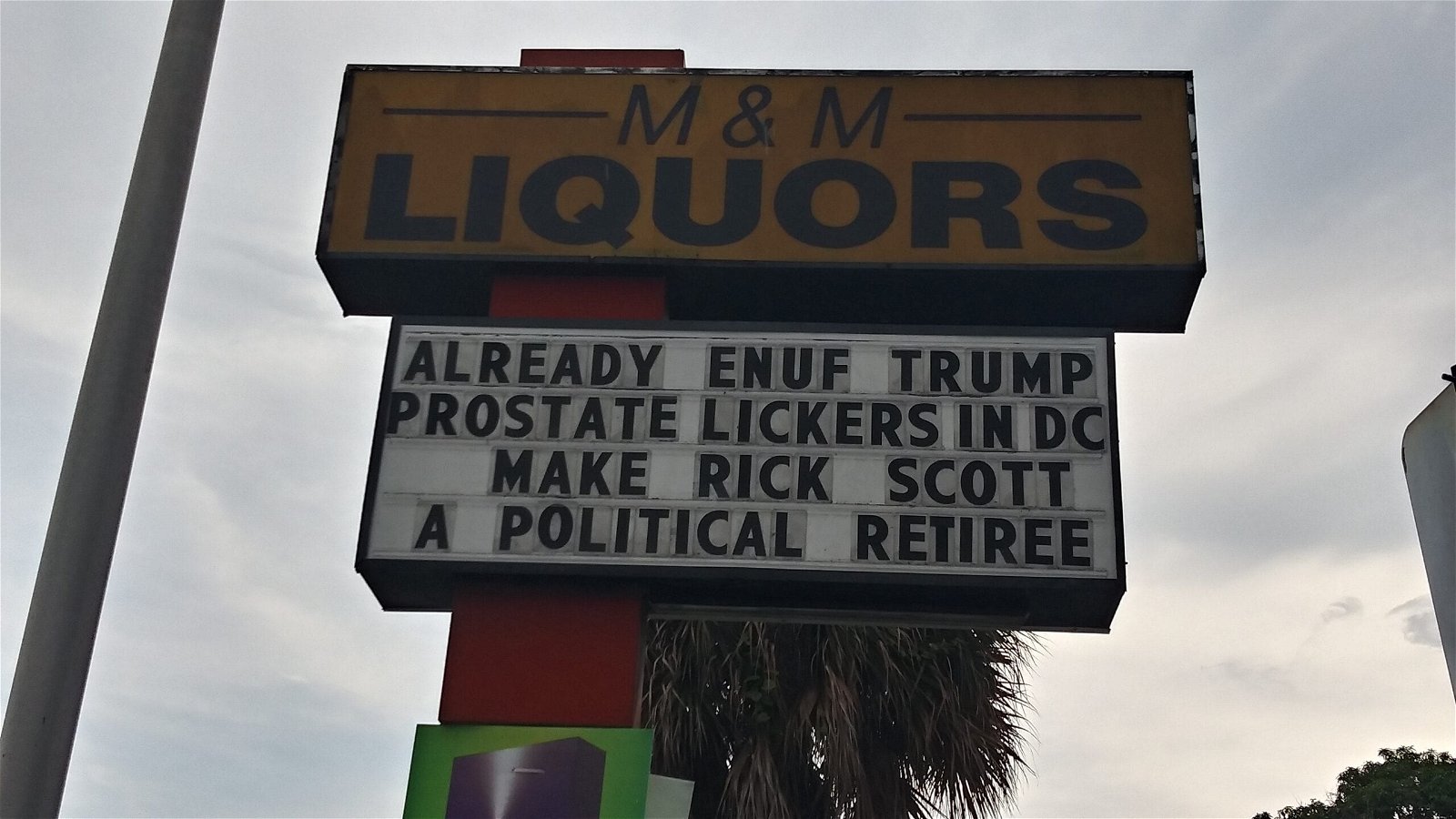