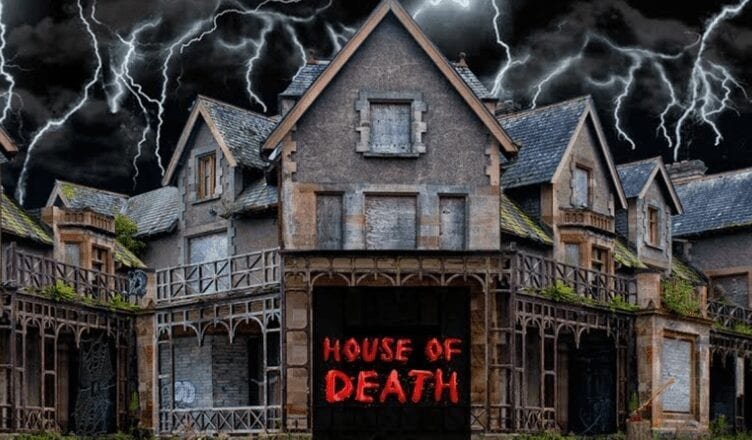 House of Death is this pretty cool Haunted House experience in Downtown Miami, near Wynwood. We went and have a local’s perspective to share. It was definitely fun but we’re not quite sure it’s worth the full price of admission, $20 to $25 bucks. We found a 40% coupon on Saturday night off of Facebook, bringing the price down to $15, better.

They have deals on Groupon but are almost sold-out.

We suggest looking around Google or Facebook the day of, just to see.

The house itself takes about twenty minutes to walk through. Not too long at all. However, it’s dope. There must be eight to ten rooms, fully designed professionally, almost like a movie set. Super scary and the barn-like house and has all the bells, whistles, lights and smoke to rattle one’s nerves. Also  the actors are legit, especially the dudes with the chainsaws, in which you can feel the heat emanating.

My date was drunk and kept trying to kick the actors as they jumped out of nowhere.

It does make you wonder about the chainsaws though.

To get into the venue some dudes pat you down with a radar thing. No weapons allowed, thankfully. But not impossible to sneak in a flask. Or, you will pay $13 for a cocktail or shot, well drinks. $15 for medium shelf. The shots are big though, almost like doubles. The beers (only Heineken and Corona) cost $7 a pop. The food was terrible with huge giant Argentinean meat sticks and churros the only option. They had this one shoot-a-zombie game where they give you a paintball gun and for a few dollars you can cap some dude running around dressed like a zombie. Not the best gig. They also have a stage with deejays hidden in the back. Pretty cool idea. The night we went the Electric Pickle had a pop-up party. It brought people out and the beats were legit.

House of Death is built right next to Miami’s most iconic cemetery, which is cool and spooky. The location is also super convenient (park in the streets by the Publix to avoid the $10 to $20 parking lot fee). Or, park nearby and take an Uber or Lyft scooter. Fun. And after the haunted house you could go to Wynwood or Downtown and make it a night. Because honestly, House of Death is fun, but unless you are feeling the deejay that night, you’re not going to want to spend more than an hour there.

For more info and tickets on House of Death check out their site.