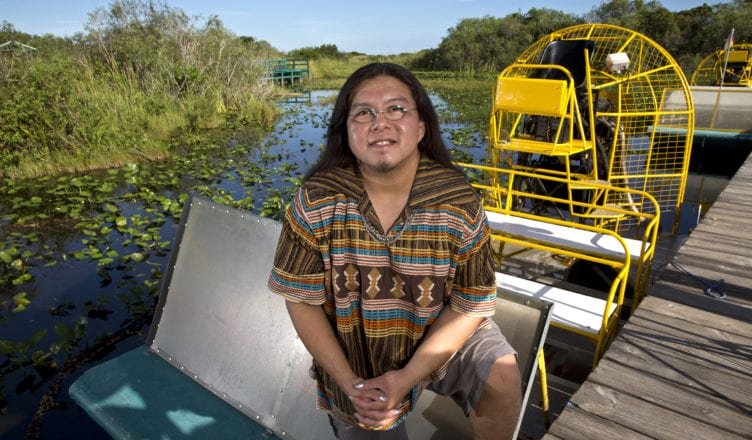 From February 24- March 31, Miami Book Fair celebrates How We Became Human: New and Selected Poems 1975-2001, by Native American poet Joy Harjo. The Big Read kicks off this Sunday, February 24 with Sundays in the Park with AIRIE. Miccosukee artist and activist Houston Cypress answered a few questions for the Jitney about Harjo’s book, the upcoming think tank discussion, and efforts to preserve the ecology of the Everglades.

Miami Book Fair’s Big Read Selection this year is Joy Harjo’s book of poetry How We Became Human. Have you read the collection? Why should it be read widely?

Houston Cypress: It’s a joyous occasion when indigenous leaders with the artistic stature and visionary capacity of Joy Harjo are celebrated. Because the magic and the mystery of the Universe continues to scintillate vividly in her poetry. So much of humanity’s search for understanding and purpose relies on systems and tools that seem to dispel the so-called illusions of myth. But what are we going to do when we realize that the protocol is still valid and intact? When the world seems to be upended, we enter a realm where the jurisdiction of the Trickster reigns. Where song becomes not only a way to maintain a rhythm, but becomes vital in sustaining a world, a garden, a fire.

Aside from the vitality of myth to help us navigate the challenges of today, I’ve also appreciated seeing the struggle for indigenous rights over the past half century interpreted through Harjo’s poetry. We see the hopes and betrayals of women in the American Indian Movement, the thriving ceremonial lives of women of all ages, and the ways that American tragedies can be catalysts for restoring our relationships with each other, and the world that we dream in tandem with.

You’ll be leading an airboat ride into the Everglades with AIRIE Fellows to visit a tree island this weekend prior to Miami Book Fair’s Big Read kickoff event Sunday. You’ve been instrumental in leading these expeditions with your organization Love the Everglades Movement. Can you talk a little about how inviting diverse groups of people onto tribal land has helped in your efforts towards Everglades preservation? What are your goals on these trips?

Our field trips, much like our arts and spiritual practices, have evolved over the course of our work in the past few years. We started out educating, then networking, grew into coalition-building, and have embraced art, performance, and contemplation as a way to engage with society and communities. All of these themes, communities, and modalities have helped us to flesh out the Greater Everglades conservation discourse to resemble something like the ways that life flourishes, in multiple dimensions. There’s a great, powerful, but monolithic environmental community that is suffering from Cabin Fever. By bringing so many kinds of people together, we can curate creative encounters that generate new art, new relationships, new research, new language, new prayers, and new native plant gardens. Ultimately, we want people to feel free and welcome to continue to explore the Greater Everglades, and to respect it in all kinds of ways.

You’ll be on a panel of activists and artists this Sunday with Miccosukee native Betty Osceola and AIRIE Fellow Cathy Byrd discussing culture, activism and the arts geared towards environmental conservation. How does art figure into your conservation efforts?

Lately I’ve been enjoying the convening power of art. For example, the Inflection Points art installation was a project that took us to the back country of places scattered throughout the Greater Everglades watershed. Jean P. Sarmiento, Luis A. Diaz, and I became familiar with local communities, their environmental concerns, and created an interfaith framework that opened up a space for visitors to directly influence the spiritual dimensions of Everglades Restoration. Aside from this arts-based approach to coalition-building and spiritual work, we rely on the arts as a site for experimentation, to conjure the possible, to inspire action. And we need all kinds of friends to remind us of what joy can look like. We gotta talk about joy more. Yes, it can be hard these days, we’re looking at lots of change approaching, and yet we are doing the difficult work of getting our act together on this planet so we can experience joy.

There’s the frustration of working with people entering and leaving the administration at such a rapid pace, because that compels us to make new relationships with administration officials. I’m concerned about revisions to the Endangered Species Act, and how this could mean reduced protections for species. Aside from the implications of rolling back protective regulations and policies, strangely, there’s also the added benefit of increased attention and streamlined procedures, for those that are well-connected, but that kind of favoritism is endemic to all administrations.

Looking at the situation from the long view of indigenous sovereignties, my elders are disgusted by the way that people use the Greater Everglades as an excuse to fund their interests and pet projects. At a recent annual, intergovernmental, interagency meeting convened by the Miccosukee Tribe, we heard from fish and wildlife officials that bird nesting numbers are thriving due to the effects of low water levels at the right time of the year. The Miccosukee Tribe have been clamoring for relief from the prolonged flooding in their homelands, and the evidence justifies their claims. But for so many years state and federal officials have argued with the Tribe, disputing their claims. So overall, there are islands of success, lots of despair, and the faint incantation of medicine singing from the bush.