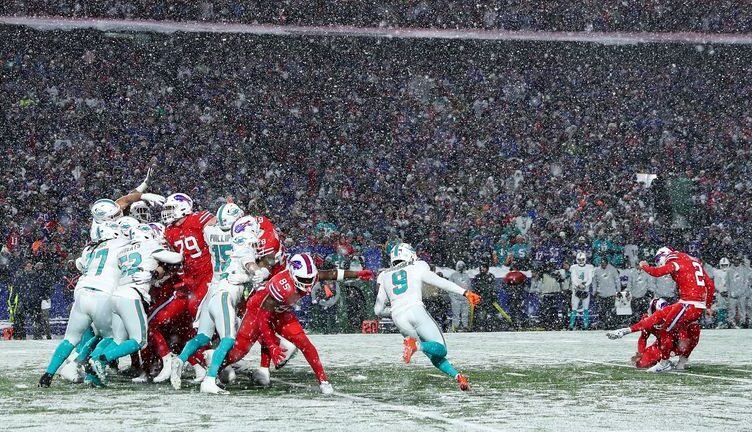 A wild year for the Dolphins has them making the playoffs with third string rookie quarterback, Skylar Thompson at the helm. This team is not giving up but many fans are throwing in the towel. Although the odds are not in the Dolphins favor against the Buffalo Bills,  on any given Sunday the unexpected could happen. With the right game plan an upset for the underdog Dolphins is within their grasps if the right things fall into place.

The way the Dolphins snapped their five game losing streak against the Jets, although not the prettiest, was classic football. Miami played conservatively and relied on the fundamentals of the game to win with rookie QB Skylar Thompson. Miami cannot divert greatly from what got them that win. Use what is working for you and not what hasn’t been.

Miami’s offense relies  heavily on timed passing routes and signature aggressive offensive style. While it worked wonders at the beginning of the season, it became an Achilles heel towards the end. McDaniel has shown to be a risk taker and created an explosive offense but as a rookie coach, he is learning the hard way that you must incorporate the fundamentals of the game, and have patience.

A safe game plan enabled Miami to snap out of a slump and clinch a playoff spot. It took starting our 3rd string QB in the final game of the season to play hard nosed football. Skylar Thompson didn’t put up magnificent numbers but we cant underestimate how he stuck to the game plan and protected the ball. The Jets had one of the better defenses and arguably the best secondary with the league leading interceptor. Skylar managed to throw the ball away when necessary to avoid sacks and not throw a pick. McDaniel relied more on the run game, with Mostert and Jeff Wilson Jr having productive days. It was a game about field position and Miami’s defense came through. Kicker Jason Sanders did his job doing all the team’s scoring with three field goals, including a 50 yard game winner with 18 seconds left.

What do the Dolphins need to do to beat the Bills on Sunday?

First, Skylar has to continue to protect the ball like he did so well in the last game. He is slowly getting into his groove and more comfortable directing this team. He does very well executing short screen passes that get the ball to our talented running backs. Miami also has great tight ends that are excellent of short routes. Although everyone wants to see wide receivers Tyreek Hill and Jaylen Waddle get those big explosive plays, remember it didn’t help us get the win during the five game losing streak. The more boring approach did.

Miami must be patient. As the game progresses the deep ball will open up but they must not force it early on. The Dolphins have to start off running aggressively with Wilson and Ahmed and have Mostert as a third option if he’s available to play. Thompson also has great mobility and can scramble out of the pocket to create a headache for the Bills. Even designing some running plays for Skylar is great option to have in this game. The Bills have little to anticipate out of Skylar, so that can work to Miami’s advantage.

Conversely, Miami’s defense has to be on point. Their battled secondary will be tested once again and they have to make adjustments to keep the Bills guessing. Miami has to pressure Buffalo QB Josh Allen and also be prepared for his running abilities and his spontaneous throws under pressure, which gave them trouble last time around. The Dolphins’ running defense has held opponents. An occasional blitz from different sectors of the defense can help keep Allen guessing. Miami’s linebackers will need to help out the secondary and protect the middle of the field to deter Allen from scrambling out of the pocket.

Special teams, including Sanders kicking and the punt and kick return teams can be the difference in this game if our offensive game plan is successful. By running the ball aggressively, Miami can control the clock, keep Allen off the field and have another low scoring game that can be won with few scores.

If Miami cannot execute a dominant running attack, then they will have to go to plan B and let our rookie quarterback compete with Allen in a throwing match. That would not be ideal.  The key is to slow the pace of the game early and if Miami keeps it close for most of the game, there is a chance it can go either way in the final drives.

How will Tua’s absence help or hurt the Dolphins?

This is a loaded question and can be answered through many angles. Most will say that Tua gives us the best chances of winning. It is true he has shown to be a great executor of McDaniel’s explosive offensive style. However,  in the late season that game plan did not provide wins.

This Dolphin team is very young, with Tua and Skylar being our QBs and McDaniel being a rookie coach. Miami has made lots of progress on many fronts but they’ve also been learning and just getting started to create a solid and well balanced team. In the long run, it is necessary for Tua to take his time getting healthy again and not to push his recovery.

In addition, there are elements of Skylar’s game that can help bring a different dimension to our offense, particularly in his scrambling abilities and unpredictable nature of what he is capable of doing.  The Jets victory showed Skylar is capable of doing what is necessary to not give the game away. If he continues to play conservatively and slowly increments his passing and running abilities Miami may be able to pull off a seemingly impossible task against an unsuspecting Bills team.

What can the Dolphins use from the previous game in Buffalo, to help them win this game?

Our last game in Buffalo was very close and offered many insights. Mostert had a monster game, and Ahmed stepped in for the injured Wilson that game. In hindsight, it is likely that had Miami stuck to the running game more they could have won that game. If the running game is working, you don’t stop running. There were crucial third and short downs that Miami elected to pass and did not convert. They cannot repeat that again.

Now in a more precarious situation with the rookie Thompson behind center,  it is more likely Miami will stick to the run in this game, especially early. McDaniel’s specialty as an assistant in San Francisco was designing running plays. He should be able to craft some tricks and be creative with our running attack. Having much of our offensive line injured does not help but there are ways to involve other positions to help create blocking and divert attention. Hopefully Armstead, Miami’s leading blocker will be able to play this game, even with his lingering ailments. There is a chance he could be crucial.

To have any chance of winning he will have to design a very strategic approach to control the ball. At the same time, he must also be ready to go off script, not so much mentally with the game plan, but practically with what comes about naturally in the game. Miami’s last game at Buffalo showed Mostert having a great game.

Had Miami kept feeding Mostert, I believe they could have won the game. The Dolphins have great talent.  If they set the tone and keep their energy high they can break away with a great upset. The Bills are not taking Miami seriously right now. They are thinking of the next playoff game. The scenario really falls into Miami’s favor. As long as they play smart and with passion, which they are fully capable of, the Miami Dolphins can come out on top.

Roger Gurdian is an independent analyst of world issues with an emphasis on social ecological health and sustainable geopolitical evolution. He is of Nicaraguan descent and grew up in Miami.

View all posts by Roger Gurdian →