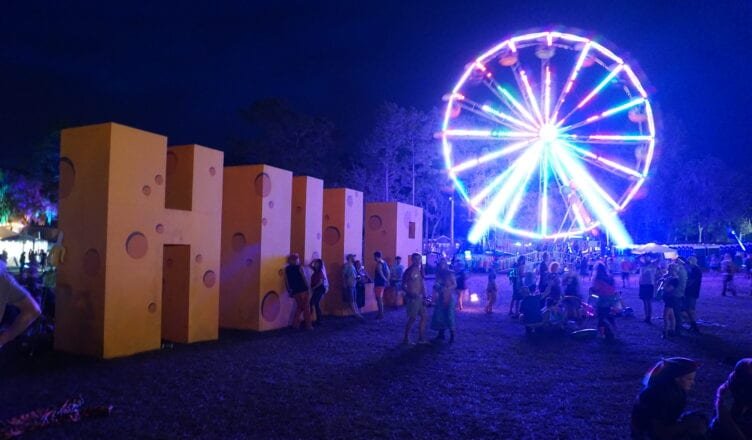 Sometimes you get just the briefest taste of something and it’s enough to keep you seeking it out at every opportunity afterwards. So it went with my first time at Hulaween at Spirit of the Suwannee Music Park in Live Oak, FL this past weekend.

I’d heard great things, but never got up the gumption to trek up north the six hours for the occasion. I’m grateful I made the effort to finally make it happen, because what awaited me was an experience that I’ll surely be working more diligently towards repeating in the coming years.

The festival started in 2012 primarily as a way for co-founders Paul Levine and Michael Harrison Berg to book String Cheese Incident at the 800+ acre venue they had fallen in love with. It quickly grew into something bigger and better with a loyal following of like-minded music lovers supporting them in droves.

While Hulaween was initially more focused on jam-bands and electronic-leaning acts with time they began adding more hip-hop acts to the mix and it actually works perfectly. The diversity of genres in the lineup all fit the broad mold of the Hula’s vibe. Everyone performing and in attendance seemed equally devoted to the spirit of laid back good times. With over 20,000 attendees (compared to 5,000 their first year) that’s a noteworthy accomplishment. Try finding any event in Miami with that many people that doesn’t end in some sort of viral video of debauchery.

Hulaween found a warm cozy spot in my heart, and I can’t wait to go back in the coming years for longer stretches under the star-filled skies of the Suwannnee. It’s tough to condense the full experience into words, and of course everyone will find their own favorite elements to this, or any festival but here were some of my favorite aspects:

With over 800 acres the park really is huge, but the organizers managed to do a great job with the physical layout and making a potentially chaotic situation seem very straightforward. Despite arriving a good day or two after most people had gotten there and picked their campsites (it’s first come first served unless you upgrade to one of their higher level tickets/experiences), we didn’t find it too difficult to find a spot to set up our tent at 1:30 am on Friday. Even better, once we got the chance to explore the grounds the next day we realized that everything was within easy walking distance. This aspect can’t be overstated, as I’ve been to some festivals that involved a 45+ minute walk to and from your campsite to the festival grounds making it more of an ordeal than enjoyable experience.

One of the main things that sets this festival apart from others is Spirit Lake, an area surrounding a small lake that gets totally transformed for Hulaween. Each year top-tier artists are brought in from around the world to help create an immersive and awe-inspiring environment filled with colors, lights, sounds and more. During the day you can appreciate huge wooden sculptures by renowned artist Thomas Dambo, check out the Mural Maze, or just take a break and hangout by the shore on one of the many benches set up. At night the place is brought to life on a whole other level, with projectors and speakers scattered throughout the wooded area mounted up in the trees and interacting with the natural and man-made structures. These serve to enhance all the art installations, as well as creating some unique activations in their own right, notably the 3D video projection fountain spectacle that was on display in the middle of the lake.

For the beer nerd in me I loved the fact that the beer selection was on point. Though decent beer was available all throughout the festival grounds, if you made your way over to the specially designated Kyle’s Beer Corner near the main Meadow Stage, they had an even more diverse and crafty selection on hand. Little did I know (since I only found out once I got back home) they also held special events there throughout the weekend giving visitors the chance to win free prizes, take part in food pairings and sample specific brews. Shout out to the 2017 Lagunitas Imperial stout they had on tap all weekend. That one was definitely the winner for me.

Well… duh. One of the most impressive things about the festival was their ability to book acts from different genres, who all put on impressive shows. Highlights included a highly energized set by Jacksonville-based LPT. The one thing a Miami boy like me was not expecting to see up at a festival like this was a salsa orchestra, but they put on a show that rivals any I’ve seen back home. They were on one of the smaller stages near Spirit Lake, but had a big crowd dancing nonstop, including a conga line winding through at one point. Flying Lotus and Thundercat both had great sets, and in ways contrasted each other nicely. Lotus had a pretty intense stage production, with a projected enclosure surrounding him going through a variety of different cool effects. Thundercat however went with a more stripped down setup, letting his music shine on its own. My favorite show of the festival was the one I happened to make the drive up to see: Anderson .Paak. The rising star put on a fun and high-energy show that featured most of his hits as well as a nod to former collaborator Mac Miller at one point.

View all posts by Yuval Ofir →