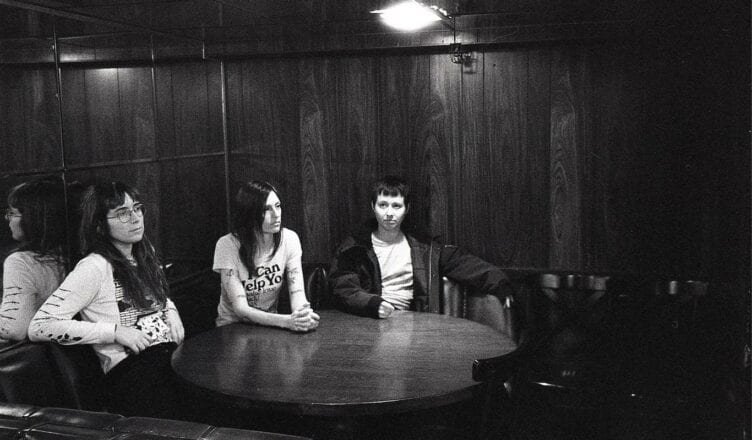 Las Nubes singer Ale Campos stepped up to the microphone at a recent gig and said, “I hate talking on the mike.”

I asked her about that.

“Well, I don’t like talking to the audience. I didn’t even want to be the lead singer, but no one else will do it.”

Las Nubes drummer Emile Blair Milgrim jumps in, “Yeah, the audience expects it. It’s okay to introduce the song and then maybe thank the promoters, if they weren’t complete jerks, but that’s it.”

I mention I saw the Pixies play 37 songs without a single word to the audience. I get a stare that says, Did we ask you?

And that’s who they are. No nonsense, no b.s., straight-up genuine. They look the part of Indie rockers. I won’t even try and describe their attire. I will mess it up for sure. Believe me, they have the look. Their music is complex, with time signature and tempo changes, but unpretentious as well. Catchy without trying to be. Ale emphasizes she has no interest in writing songs with bigger hooks. She thinks mainstream is mostly “a lot of garbage.”

I ask about their association with Iggy Pop. Emile answers, “I’m surprised that didn’t get more media attention…”

Las Nubes has earned it. Last year, Ale and Emile, joined by bass player Nina Souto, guitarist Steph Taylor, and bassist/guitarist Gabriel Duque played almost 100 shows all over the country. On January 22 they leave to play four shows in Mexico, followed by four shows from Oakland to Riverside in California.

So, will Ale and Emile ever be able to leave their day jobs at Miami’s Sweat Records to focus solely on music? No matter how much I prod, the answer remains the same. “It’s not realistic. We just want to break even financially and have a sustainable music career. Playing shows is fun. We are happy to go wherever they want to hear us.” As expected, their answer is as unassuming as they are.

But I disagree. Las Nubes already has that special something.  And they will continue to improve. If they catch on elsewhere, South Florida will embrace them. Big time. Someone who knows a thing or two, Iggy Pop, obviously agrees with me https://rusbank.net/offers/microloans/zaymyi_nochiu/.

Listen to their new record, SMVT, and let me know what you think. Don’t be surprised if one day in the future, Sweat Records loses two of their prized employees!