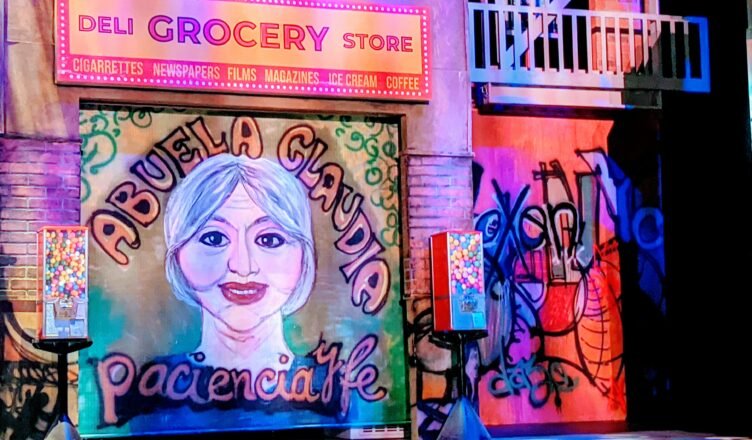 In the Heights in Miami.

So here’s the scene.

Usnava owns the bodega, center of the block.

Daniela owns the gossipy salon next store and the Rosarios control the taxi dispatch on his other side.

Usnava is in love with Vanessa, who works at Daniela’s salon.

Nina Rosario is back in town for the summer, from a year at Stanford. Benny, who works at the dispatch, loves her, but her family hates him, even though they kinda raised him.  Sonny, who works at the bodega, and is Usnava’s cousin, also loves Nina.  Follow? Of course you do.

That’s just the start of things.

Go see the play because we’re not spoiling anything else.

In The Heights Miami review

Sixteen months ago productions abruptly came to a halt across the world. In Miami, at the Adrienne Arsht Center, Hamilton was enjoying an amazing month long run.

In a gist of a twist Lin-Manuel Miranda could only write for a night, big indoor theater returned in a resounding manner with In The Heights.

The sold out show, rescheduled twice due to COVID-19, proved the third time was the charm as it dazzled arguably the most diverse Latin audience that will ever see this wonderful tale on a stage.

Truly a parallel story consisting of multiple narratives building at the same time, the musical weaves through its 2.5 hours with style, ease and a wonderful swagger. With raps reminiscent of Hamilton, duets, ballads or big song and dance numbers, the play is a smash hit!!

Sidenotes In The Heights Miami

The show started 20 minutes late due to the large crowd arriving on Miami time and having to enter with Covid protocols.

Masks are required at all times.

No food or drinks in the house.

It’s freezing in there, maybe 65 to 60 degrees, so bring a sweater.