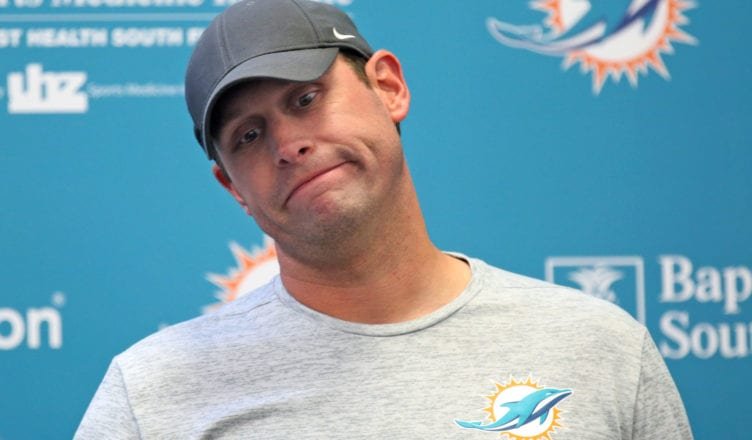 Some questions are unanswerable. What is the meaning of life? Which came first the chicken or the egg? Is the Miami Dolphins head coach Adam Gase any good at his job?

Week to week we seem to change our opinion. After the loss to the Indianapolis Colts the national media pointed and laughed at Gase for blowing a ten point, second half lead with some awful play calling. Then two games later Gase made the genius New England Patriots’ coach Bill Belichick look like a fool with a last second game winning hook and ladder play that has since been dubbed The Miami Miracle.

So is Gase a fool or genius? Like most truths the answer lies somewhere in-between.

Through nearly three seasons Gase has the even Steven win-loss record of 23-23. He took the Dolphins to the playoffs his first season while his sophomore season had an awful 6-10 record. This seemingly mediocre 2018 season might be the best case for Gase’s competence. With two games left the Dolphins have already overachieved to win 7 games. In the preseason Pro Football Focus picked the Dolphins to be one of the league’s five worst teams.  Meanwhile ESPN picked the Dolphins to be the worst team in all of football. The fact that it’s December and the Dolphins are still in playoff contention feels like the real Miami Miracle.

The Dolphins are 30th on offense and 28th on defense out of 32 teams. The fact that they are middle of the pack when they should have one of the worst records in the league could be attributed either to absolute stumbling, bumbling luck or to a coach who manages to find an edge whenever there is the slimmest opportunity. At this point I would be open to either explanation.

In my opinion Gase is a creative, at times brilliant offensive mind, who hurts his cause with his inability to manage personalities. This past year the Dolphins traded or released their three most talented players in Jarvis Landry, Jay Ajayi, and Ndamukong Suh for a meaningless pair of 4th round draft picks, in part because they weren’t Gase’s  kind of guys. Some will say we improved because of their subtraction, and we do have a better record than we did last year. But when you look at how little talent the Dolphins have you can’t deny those three guys would have helped.

What’s more worrisome are who Gase’s guys are. Last year he was inseparable with quarterback Jay Cutler. This year Gase’s bromance with Dolphins quarterback Ryan Tannehill seems to know no bounds. Gase got the Dolphins job because he had a reputation as a quarterback whisperer working with Peyton Manning and Tim Tebow. It was believed if anyone could turn Tannehill into a star or at least a winning quarterback it would be Gase. By Gase’s play calling it seems he knows deep down he must win in spite of Tannehill. He needs next year to have a worthy challenger to battle for the starting quarterback job or we’ll continue to wonder whether he’s a good coach or not.

Despite mixed results in his first three seasons Gase saved his job for now with The Miami Miracle.  2019 is when he should probably get his resume ready. Owner Stephen Ross fired the Dolphins’ previous two coaches mid-way through their fourth seasons.