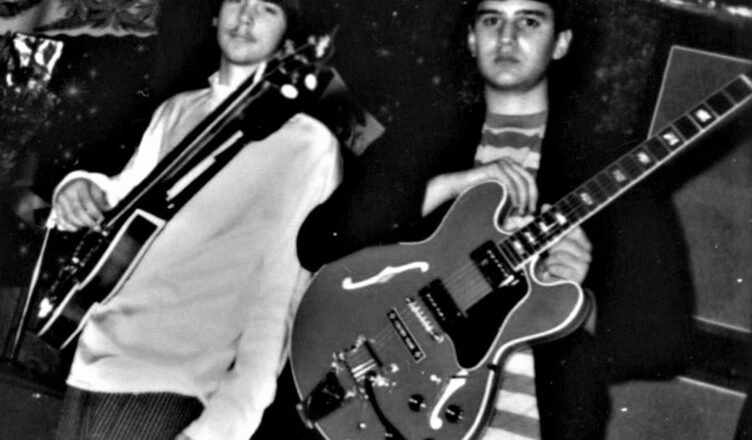 In the spring of 1968, my dad would be transferred from Central California to Naval Air Station Jacksonville. I had already heard from a friend who had lived there that the music scene there was “happening”—and indeed it was.

I couldn’t believe it. When I got to town, there were dozens of working local bands and probably hundreds of guitar players. In Orange Park—a small, sleepy suburb in nearby Clay County where my parents bought a tract house utilizing the G.I. Bill—there were several bands, the most prominent of which was the Daybreakers. That group had a local hit on WAPE-AM, a 50,000-watt “blowtorch” that covered the region from Daytona Beach to coastal areas of North Carolina. Many kids from south and central Georgia didn’t even listen to their own local stations, they listened to the sounds of Jacksonville’s “Big Ape.”[1] Thanks to massive airplay, the Daybreakers were booked in and around a 150-mile radius and making tons of money.

It happened that the group’s virtuoso guitarist, Page Matherson, sat in the aisle next to mine in homeroom at Orange Park High. This was inspiring to say the least. Suddenly it seemed the fantasy could be realized.

There were other active groups, such as the Nu-Sounds and the Six Teens—and that was just in Orange Park. Jacksonville proper had a good dozen or more. On any given weekend, my friends and I could cruise a plethora of teen clubs and see live bands everywhere we went. On our side of town there were the Orange Park Lion’s Club, the Sugar Bowl (Twin Hills Civic Association), Woodstock Youth Center and the auditorium at Riverside’s Church of the Good Shepherd. Take your pick! It was a teenage music lover’s heaven.

The guitar scene in Jacksonville, however, was not as collegial as it had been in Lemoore. You could not be taken seriously by “real” musicians unless you had a good-quality instrument, and such guys were not generally inclined to give free pointers to beginners. I had to get a real guitar.

I harangued my parents until my father finally took me downtown to Paulus Music, who had the local Gibson franchise. I had my heart set on a black Les Paul Custom like the one Matherson played, but it was out of our price range—more than $600, which was a fortune in 1969. Fred Paulus, the store owner’s son, said, “I’ve got just the thing.” He brought out a 1969 Gibson SG Standard—also designed by Les Paul—which was much lighter and more reasonably priced: $348.40, sales tax included. This was the equivalent of $2, 669 in 2022 dollars (the Les Paul Custom I wanted would have been nearly $4,800 in today’s dollars).[2]

If the SG was good enough for Eric Clapton—Gary Rossington had recently purchased one from Fred also—it was surely good enough for me. The deal I made with my father was I would get a part-time job on-base as a busboy and make the $20-per-month payments. I quickly learned how to use a mop! That arrangement didn’t last long, though, because the jarheads kept hassling me about my hair, which was maybe an inch over my ears and collar.

I was fascinated with Clapton’s work—most of us were—but I simply could not get the hang of it. I needed help. It never occurred to me to pay for lessons, and I doubt there were any guitar teachers who understood blues or rock styles anyway—most teachers were jazzbos. Besides I couldn’t afford lessons, and my parents weren’t about to lay out the bucks.

Someone in the trailer park where I lived with my grandmother told me about a guy down the lane who played guitar and was really good. His name was Paul Glass.

I took it upon myself to drop in on him. He was a maybe a year older than I and had dropped out of school. He was already a professional musician of a sort, playing on weekends with Cedar Hills guitarist Jeff Carlisi—who would go on to legendary status—in a group called Doomsday Refreshment Committee. Both of Paul’s parents were at work. He hung out in the trailer all day with the shades drawn, practicing guitar and waiting for his weekend gigs with Carlisi’s band.

I knocked on the door. Paul stuck his head out with his long, stringy hair, and said brusquely, “What?” I said, “I heard you play guitar.” He replied, “Yeah.” I raised up the black guitar case I was carrying and said, “Look what I got.” He said, “Let me see it.” He opened the door, and I followed him inside. It was dark. I pulled the SG out of its case. As he sat on the couch and played my SG masterfully, he stopped and sneered, “You don’t deserve this guitar.” I was somewhat taken aback at his asperity, but my feelings weren’t hurt because I reckoned this meant I had made a damn good choice.

Glass taught me the secret of playing blues and rock: super-light-gauge strings, specifically Ernie Ball Extra Extra-Slinkies, with the high E gauged at .008 of an inch. Someone with small hands like mine simply could not “pull” strings the way Clapton did without using super-light strings.[1] This unlocked the door, and I spent nearly every night practicing till the wee hours. I would go back to Glass’s trailer many more times; we became friends of sorts.

Glass, who owned a blond Epiphone Casino (like John Lennon’s), wanted to borrow my SG for his gigs. Of course there was no way I was letting it out of my sight. So he came up with a plan: I could come along to the gigs and keep an eye on it. I got to meet and hang out with Carlisi and other musicians from Jacksonville’s Westside and see up-close how all this was done. Still, I was not really good enough to play in a band and remained inhibited. Even more daunting, I had no amplifier to speak of—only a tiny, battery powered practice amp.

I put a group together with some rank beginners like myself, just two guitars and a drummer—no bass player. Without a bassist you weren’t considered a band. We played strictly originals, which was the kiss of death. You could not get gigs without playing certain crowd-pleasers such as “Mustang Sally.” Funny how that hasn’t changed! We would have liked to gotten Glass in the group, but he was out of our league. He did come by to jam with us once but never returned.

Even though he wouldn’t join our group, I still hung around with Glass since he only lived a few doors away. He taught me about the local guitar culture and its deities. He talked about a group from Daytona called the Allman Joys, which featured Duane Allman, considered one of the top players in Florida. Glass insisted, however, that the main man was Dickey Betts, who lived in Jacksonville and played around the area often.

Betts was from Bradenton. His group, the Blues Messengers, had come to Jacksonville the previous year to work as the house band at a nightclub called the Scene. The owner asked the group to change its name to the Second Coming because bassist Berry Oakley looked like Jesus with his long hair and beard.

Glass and I journeyed all over the area to see Betts at every opportunity. One night we hitch-hiked to a Westside district called Paxon to see the Second Coming at the Woodstock Youth Center on Beaver Street. It was nerve-wracking because this was a rather rough, working-class area, and with our long hair—his was nearly down to his shoulders—we had to avoid the local rednecks, which is pretty difficult when you’re standing out on the street with your thumb sticking out. When we saw a “muscle car” coming, we would duck back onto the sidewalk and look the other way.

We finally made it to the teen center. Admission was cheap, maybe one dollar. We couldn’t wait to hear Betts play “Crossroads.” He could give Clapton a run for his money! But to our dismay Betts didn’t play many solos that night. A diffident young man with stringy blondish hair was “sitting in” on guitar and hogging the solos.

We were irate. “Let Dickey play!” we shouted. “We came to hear Dickey!”

We were heckling Duane Allman. Even though Glass had mentioned Allman to me a couple of times, he didn’t recognize the guitarist staring down at his guitar with his hair in his face.