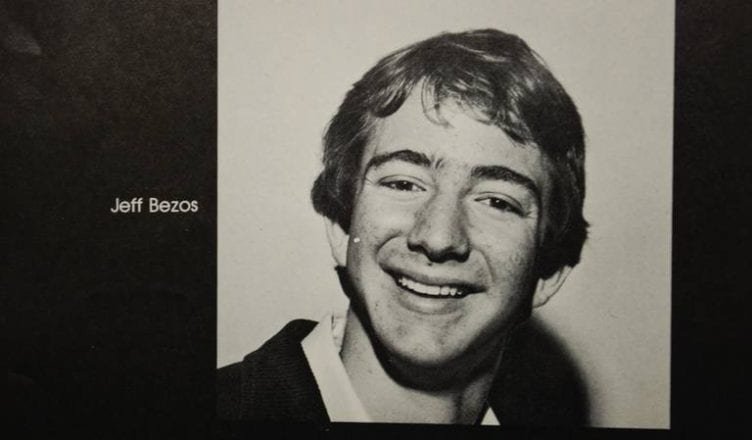 Jeff Bezos went to high school in Miami. It’s 100% true. He graduated valedictorian of Palmetto High School (in Pinecrest) in 1982, before moving on to Princeton for college.  We did some research and as far as we can tell he spent all his high school years at Palmetto, where he was described as a science nerd.

According to Wired magazine in a piece published in 1999, “{Bezos] spent one summer as a fry cook at McDonald’s, studying the company’s automation improvements even while he responded to the Pavlovian cues of the many and often simultaneously sounding buzzers that told him when to scramble his eggs, flip his burgers, and pull his fries out of the boiling vat.”

According to the same article, Bezos spent another high school summer teaching children’s camp with his girlfriend, offering a curriculum that they designed, described as “a mix of science and literature, the future and the past. Required reading included The Once and Future King, Stranger in a Strange Land, The Lord of the Rings, Dune, Watership Down, Black Beauty, Gulliver’s Travels, Treasure Island, and David Copperfield, along with the plays Our Town and The Matchmaker. The science curriculum ranged from fossil fuels and fission to space colonies and interstellar travel – with a dollop of television and advertising study thrown in for good measure.”

The course was for ten year old’s.

Jeff Bezos is Adopted & his Dad is Cuban

Bezos was born Jeffrey Jorgenson (anyone dare to call him J.J.)?

According to CNBC, “His biological dad, Ted Jorgensen, met and started dating his mother, Jacklyn Gise, when they were both in high school. Jorgensen was 18 and Gise was 16 when she became pregnant. They flew to Mexico with their parents’ money to get married. Jorgensen belonged to a unicycle troupe and worked at a retail store making $1.25 an hour, so he didn’t have much money.”

We couldn’t make this shit up.

They divorced when Bezos was 17-months old and he never met his biological father once. Soon after, his mother met a Cuban immigrant named Miguel “Mike” Bezos  who according to the Miami Herald “came to the United States alone as a teenager in 1962 as part of the famed Operation Pedro Pan.”

Mike Bezos manned up and fathered another man’s son. When Bezos and Gise married in 1968 Jeffrey Jorgenson changed his legal name to Jeffrey Bezos (again, anyone dare to call him J.J.)?

Mike Bezos and Jacky Gise had two more children, both who also lived in Miami for a time, and the family is close to this day.

Talk about hitting the genetic pool?

Why Is This Important?

I don’t know. The richest man ever on planet Earth ever went to Palmetto high school and his family lived in Pinecrest? That’s a big deal. And if you think about it, maybe, just maybe, Jeff Bezos wouldn’t mind helping out the city he went to high school in. The city with the most Cuban refugees in the world. A city that certainly wouldn’t mind the jobs that would come with a nice big Amazon plant. Miami makes a lot of sense –if you think about it — it’s as far away from Seattle you can get in the Continental U.S.

Not sure why there is no recent media highlighting the Bezos connection to Miami. In fact, there are only a few articles at all. The Herald piece written in 2013 and the Wired clip in 1999.