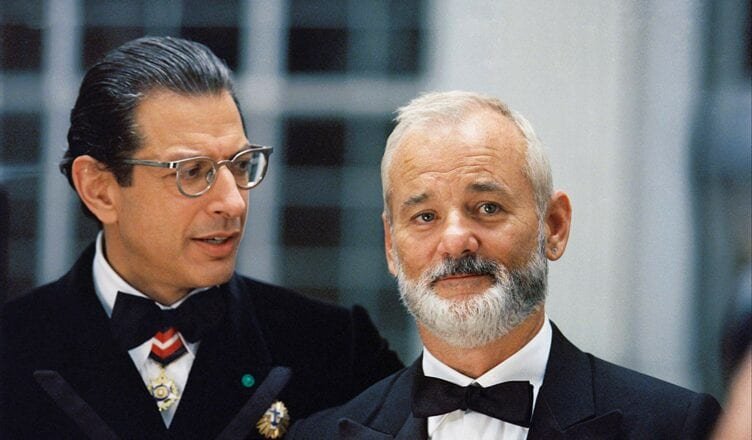 Jeffrey Lynn Goldblum was born October 22, 1952 in Pittsburgh, Pennsylvania, one of four children. He is of Russian / Austrian / Jewish descent. Goldblum began his career on stage in New York City at the age of 17 and earned his first film credit in Annie Hall with one memorable line of dialogue about forgetting his mantra.

In the 80’s, he made crazy weird movies like The Fly and Earth Girls are Easy.

In the 90’s Hollywood gobbled up his persona and threw him into blockbusters like Jurassic Park and Independence Day.  Then in the 2000’s he embraced his quirkiness becoming a regular player in Wes Anderson movies and popping up in cool cameos like The Pull-Out King in Portlandia.

Jeff Goldblum is no doubt cool, but also a little annoying, also very much like science.

In the end, if you are Team Goldblum, it’s a science.

William James Murray was born September 21, 1950 in Wilmette, Illinois, a suburb north of Chicago. He was the fifth of nine children and is of Irish descent. Murray began his acting career in comedy at the infamous Second City theater group in Chicago. Along with Dan Aykroyd, John Belushi and Gilda Radner, also members of Second City, Murray joined Saturday Night Live in 1975.

Eventually Murray transcended into an icon with classic 80’s screwball comedies like Meatballs, Stripes, Caddyshack, Groundhog’s Day and Ghostbusters. Then, later in his career, like Goldblum, Bill Murray was absorbed into the Wes Anderson canon whom embraced his quirkiness like no other. There is no Wes Anderson without Bill Murray. Life Aquatic, Rushmore, The Royal Tenenbaums, Moonrise Kingdom, and on and on.

Thing with Bill Murray is he’s kind of a dick. His early characters are bombastic, nutty, sarcastic, cocky anti-heroes. His late characters are bitter, depressed, cynical and sardonic. Bill Murray can play an asshole that you love like nobody’s business.

Bill Murray is like sports, a spectacle, a show, with flair and pageantry, but at the same time just a silly game.

If you are Team Murray, for you — it’s a game or sport. And you got that going for you.

It’s a close call, but for us it’s Bill Murray.

We like sports over science even though we know what’s more important.