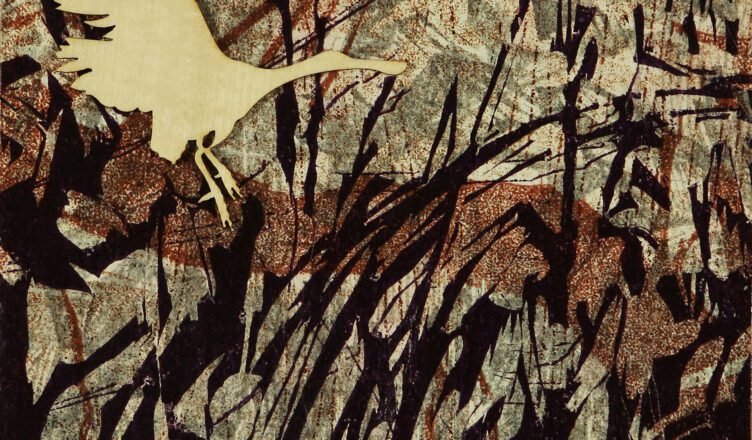 “My message is simple, to capture the environment in all of its pure and natural beauty, before it is permanently changed.”
–Jennifer Basile

Jennifer Basile captures shimmering vistas of Florida’s unique ecosystem, the Everglades, with sculptural depth and seductive detail. She transforms the sparkling path of swift moving light into nearly abstract, prismatic shapes. She renders this light as it incises patterns that appear and disappear among arching networks of mangroves.
A master printmaker who infuses her innovative work with a passion for drawing and painting, Basile conjures the magical wonder of the Everglades in its unique and increasingly endangered wedding of water to land.

In works like “Coot Bay 2,” she allows us to peer inside the dense thicket of mangrove forests. Fractured geometric bits of white convey evanescent light glancing through forest leaves and branches. Diagonal ribbons of white evoke sunlight streaming for a few seconds as it gleams across the leggy grace of mangrove tap roots. In finely modulated shades of white and pewter, Basile shows us the s-shaped necks and glossy feathers of egrets fishing among mangroves.
For “Lasting Impressions: A Cessation of Existence,” her second solo exhibition at LnS Gallery in Miami, Basile has created 19 works, often layering wood and linoleum relief prints with colors and textures produced by glassine, drafting film, graphite and acrylic.

Ranging from intimate to monumental in scale, the smallest are relief prints 5 x 7 inches and the largest is the 120 x 324 inches “Cypress Dome,” a stunning relief print on Japanese rice paper that envelops viewers with its majestic panorama.
“Lasting Impressions” reflects a significant body of work created in 2021 and 2022, derived from numerous trips to Everglades National Park and occasionally to Big Cypress National Preserve and Corkscrew Swamp Sanctuary.
During those trips, Basile likes to arrive early or late in the day when the sun is lower on the horizon and casts dramatic shadows. After choosing a location to document with a relief print, her usual practice is to take, she confesses, “a ridiculous amount of images on my iPhone.” Next step is to play around with the composition of those images within the iPhone itself, and then return to her studio and load all the images onto her computer.

At that point the editing process truly begins. She will eliminate certain images and modify others, sometimes by cropping and merging them to create a wider composition until she is satisfied. While editing, she explains, “I am always looking for how the light is moving through the space. That is what excites me about a landscape.”

After projecting her chosen image onto the surface from which she will print, she reinterprets the image by drawing on the linoleum or wood surface with acrylic graffiti markers. Then she’ll use professionally sharpened, hand-forged Japanese tools to carve out her imagery before pulling the actual print.

Her art offers a distinctive take on the activist confluence of two streams of art history. Even as this year’s climate crisis battered Yellowstone National Park with rampaging floods, we must remember that over a century ago artist Thomas Moran helped spur this country to recognize Yellowstone as a natural treasure. Moran’s 19th Century panoramic landscape paintings gave many east of the Mississippi their first look at awe-inspiring peaks and vast wilderness of the Yellowstone region.

Moran’s paintings were influential in leading Congress to establish Yellowstone National Park in 1872, the country’s first national park. In the 20th Century, photographer Ansel Adams, revered for high-contrast black and white images of Yosemite National Park and the American West, was celebrated for his ardent advocacy of environmental conservation and the national park system. For this advocacy, he was awarded the Presidential Medal of Freedom in 1980.

Closer to our own time, prolific black and white photographer Clyde Butcher is widely admired for his elegant images of the Everglades. They embody a similar desire to promote public awareness of the need to conserve our at-risk natural resources.

Over several years, Basile has created her own imagery of national parks and the Everglades. It can be seen in the context of this well-known art historical tradition embracing environmental advocacy. Basile’s artistic activism is both highly subtle and intensely memorable.

As she says, “I want to make aesthetically pleasing work that reminds you of the beauty that’s there. That’s how I advocate for beauty. Quietly.”

Perhaps less well-known is the art historical tradition of woodcuts endowing yet another vital perspective on Basile’s practice as an innovative printmaker.

As digital advances like augmented reality and NFT’s carve out a growing presence in contemporary art, an exhibit this year at Madrid’s Reina Sofia museum surely reminds us that generally low-tech print media like woodcuts are a significant precursor to works created by a printmaker like Basile.

That exhibit is “From Posada to Isotype, from Kollwitz to Catlett,” curated by Benjamin H.D. Buchloh and Michelle Harewood. It examines how artists adopted various techniques of printmaking in Germany and Mexico during the years 1900 to 1968 to disseminate political ideas in times of social unrest and war.

Later prints in Mexico would advocate for Indigenous people’s rights to lands. Thematically this Reina Sofia exhibit does indeed suggest parallels to “Lasting Impressions” by Basile. Basile speaks of learning about Indigenous history of the Everglades from the Rev. Houston Cypress, an activist artist and Miccosukee Otter Clan member.

And yet, in contrast to art presented in “From Posada to Isotype, from Kollwitz to Catlett,” Basile eschews rendering human figures. Instead, she portrays wading birds of the Everglades, all the more poignant and graceful because their numbers are declining. Sometimes the birds in her relief prints have been eliminated: their presence is indicated only by their absence.

This visual device briefly recalls how conceptual sculpture by Doris Salcedo evokes the bodies of those “disappeared” by murderous violence in Salcedo’s native Colombia by representing only their belongings. Basile’s vivid strategy is to cut out the birds so all that remains is a bird-shaped silhouette of negative space within the landscape.

Severed from its natural habitat, the silhouette floats uselessly in space, showing the heron’s feathered body vanished into mangroves where it once fished. Throughout this exhibit, Basile’s superior artistry delivers a compelling testament to disrespected natural treasures.

This essay was originally commissioned by LnS Gallery.