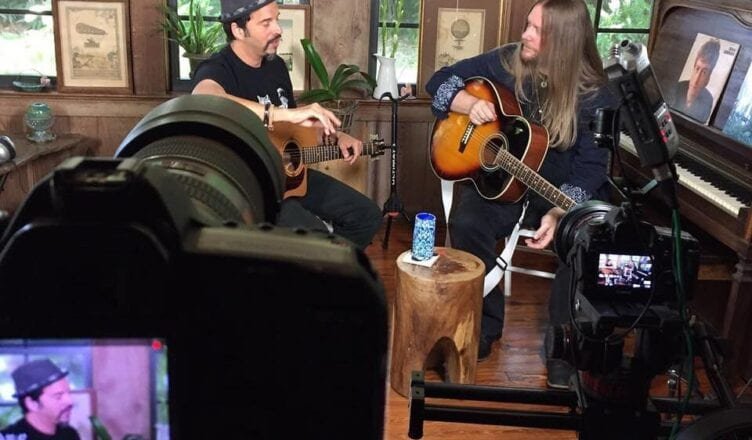 Write a complete song in 30 minutes? Who are you, Ed Sheeran in the movie Yesterday? Nope. Jim Camacho of Adventures in Songwriting.

In the 90’s, Jim Camacho and his brother, John, were in a band called The Goods. The Camacho Brothers. Oh yeah, the Camacho Brothers….. a duo that strikes awe in anybody, and I mean everybody, in the South Florida music scene. The epitome of musical talent. They gigged locally until they were swooped up in Los Angeles by an A&R guy from Colombia Records. Mr. La-La-Land A&R guy turned out to be a Leonard Cohen bashing complete douche who never released the album recorded by The Goods. Seriously, who bashes Leonard Cohen? The brothers were doomed from the start.

The Camacho Brothers immediately recorded and released another album called 5 Steps To Getting Signed. It is a rock opera along the lines of the Who’s Tommy, served up with a heaping dose of hard-earned cynicism. Then, it was back to the musical grind. After “peaks and valleys” and wondering “what are we even doing this for” they finally got a real break. In 1999, The Goods “last power drive” meant a new manager and a new label: Joan Jett’s Blackheart/ Mercury Records. With the big label came the big producer, Tom Dowd (google him if you must). Alas, as the decade ended, so did The Goods, calling it quits after a gig at The Mirage in Las Vegas.

Which brings us to Adventures in Songwriting.

Jim Camacho’s brainchild is a weekly web series where he chats with a songwriter guest and then puts 30 minutes on a time clock. He and his guest must then write a song from start to finish in those 30 minutes, or die (Jim’s words). Nothing is pre-arranged. It’s simply, now we’re going to write a complete song in 30 minutes. Go.

If that’s not enough pressure, at a later date, Jim and the guest then record the song in a studio. The only rule; what’s written in those 30 minutes is what’s recorded. No changes allowed. The recording is then released on an EP album.

I asked Jim if he was the first to think of such a creative and challenging concept. After all, there is literally a scene in Yesterday where Malik writes “The Long and Winding Road” in a matter of minutes to best Ed Sheeran’s composition.

“Well, my mom always used to say there’s nothing new under the sun. But yeah, it’s my idea,” was Jim’s thoughtful, yet direct answer. He told me The Goods used to do it whenever they got into a writing rut. Ed Sheeran wasn’t even born yet.

The first season’s six episodes of Adventures in Song Writing are directed by Juan Davila.

The 6-song EP is released on August 16. It will be available for purchase at the live extravaganza celebration on August 24 at The Mandelstam Theatre. The featured guests are all prolific, highly regarded song writers, Fernando Perdomo, Ex Norwegian, Elsten Torres, Deaf Poets, Rob Elba, and Charlie Pickett. The resulting EP is remarkably good. Every song is melodic, complex, and most importantly, a complete work. Recorded at Criteria Studios, the sound quality and production is exceptional. Trust me, you will never in a million years guess the songs were written in under 30 minutes.

Don’t believe this is possible? Come find out for yourself. Jim will pick a guest from the audience and they will write a song and perform it right on the spot http://rusbankinfo.ru/cards.html. The Mandelstam Theatre is at 8530 SW 57th Ave. South Miami, 33143. Music begins at 8pm. Tickets are available at adventuresinsongwriting.brownpapertickets.com.

Maybe we’ll get to hear the next “Long and Winding Road”. With the Camacho Brothers, I wouldn’t rule it out!