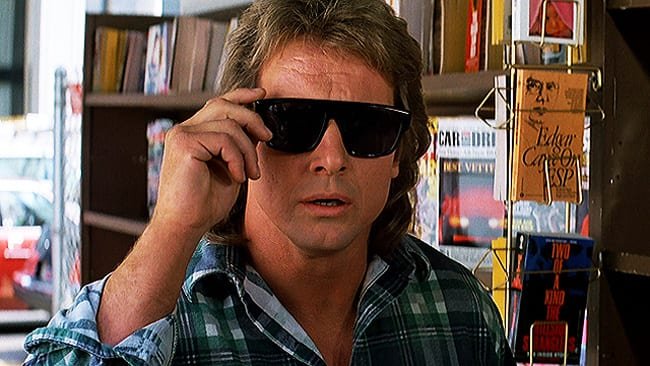 When you hear the name John Carpenter, what comes to mind?

Horror, probably. Carpenter’s movies are often steeped in paranoia, with characters facing faceless evil (and not always supernatural. Sometimes, it’s political or societal), often in limited environments. He captures  battles with a no-frills, direct style. His camera doesn’t move unnecessarily or call attention to itself. You could call it a meat and potatoes style, but that would belie the elegance of his work. His camera is where it needs to be, unobtrusive, gliding when necessary, still when it isn’t.

There’s more to him than horror. With a filmography that boasts the interstellar love story of Starman and the neon drenched, action fantasy of Big Trouble in Little China, Carpenter is more versatile than often given credit for. Still, he’s a master of the horror genre and as this is October and Halloween is close on the horizon, what better time than now to celebrate his iconic work? To that end, beginning Thursday, October 4th, Popcorn Frights Film Festival will have its inaugural Wicked Weekend event at Fort Lauderdale’s Savor Cinema featuring some of Carpenter’s greatest hits.

The godfather of the slasher sub-genre. All the tropes we associate with the slasher pic are here: the masked killer, slowly stalking his victims; the virginal hero (Laurie Strode, played by Jamie Lee Curtis) who’s spared the knife; the teens who drink, do drugs, have sex, who aren’t. It’s kind of an amazing movie; the acting is pretty bad, especially from the “teens” who are anything but; Donald Pleasence as psychiatrist Dr. Loomis–the Ahab to killer Michael Myers’ big white whale–phones it in (he forgets his character’s name at one point); and some of the dialogue is downright painful. But the movie works! It has a lot less of the red stuff than you might expect. It’s more Hitchcockian, with Carpenter carefully setting up the suspense before the killing starts (which isn’t until about the last half hour). All those shots of masked Myers in plain sight just waiting, watching still give me the heebie jeebies. But what’s most disturbing about the movie is the randomness of Myers’ victims. True, in Halloween II, Myers is retconned into Strode’s brother, but in the original, he zeroes in on her and her friends almost randomly. It’s that randomness, that “this could happen to anyone“ feeling that gives Halloween its true power and lasting appeal.

John Carpenter and Stephen King team up for this thriller based on King’s book of the same name about a killer…car. Yup, you read that right. A haunted 1958 Plymouth Fury gets its hooks into nerdy outcast, Arnie Cunningham (Keith Gordon), turning its latest owner into a ‘50s greaser (in the late ‘70s, mind you) before going on a killing spree. I’ll be honest, I’ve never seen Christine. It’s one of the few Carpenter films I’ve just never gotten around to. This might be the time to rectify that.

In 1982, Carpenter remade Howard Hawks’ The Thing from Another World with the more simply titled The Thing. Both are based on the novella Who Goes There?, though Carpenter’s version is the more faithful rendition. Frozen for thousands of years, an alien stalks a research team in an isolated Antarctic research station. What’s different about this alien is that no one knows what it looks like. It’s a parasite that infests and takes the forms of other organisms. The Thing is Carpenter in full paranoid mode, as the researchers and one helicopter pilot (Kurt Russell, in one of five movies he made with Carpenter) try to figure out which one of them might secretly be the tentacled, slimy thing. It’s a grand-guignol, uber-gory masterpiece, and the movie that started my hate/hate relationship with jump scares. There’s two such all-time great moments here that launched me out of my seat when I saw The Thing for the first time as a mere teenager. The ceiling of my childhood home still has my claw marks on it. If you’re a fan of practical gore effects, you’ve got to see this movie. They’re stomach churning, ooey and gooey. You’ll marvel at them while trying to hold your stomach’s contents in place. But this isn’t just a splatter film. With taught suspense and a creepy atmosphere, Carpenter perfectly captures the isolation and freezing cold of the Antarctic. Bring some warm clothes to this screening…and a barf bag.

How can you not love a movie that has the line, “I have come here to chew bubblegum and kick ass… and I’m all out of bubblegum.”? A send up of Reaganomics, consumer culture and 80’s excess, They Live features a five-minute fight scene between the film’s two heroes, as Nada (professional wrestler, “Rowdy” Roddy Piper, R.I.P) tries to get Frank (Keith David) to put on a pair of sunglasses. As a kid, I didn’t get it. I was like, “Put on the damn sunglasses already!” Now, getting that it’s supposed to be ridiculous, it’s hilarious. And while it is all over-the-top, it’s probably one of the smartest “dumb” movies out there. Aliens invade earth, but humanity doesn’t put up a fight because we don’t even know it’s happened. Disguised and keeping us docile through subliminal messages (a dollar bill actually has “This is your God” written on it), it looks like the aliens have already won. That is, until Nada comes across those damned sunglasses, which let him see the aliens as they are–rotten, corpse like–and their messages hidden in plain sight. Nada, an out of work construction worker, takes on a corrupt system built to keep people like him, the common man, down. Not too subtle, I admit, but sometimes you don’t need to be. With They Live, Carpenter forced us to look at ourselves and see the times for what they were and, sadly, what they still are.

Writing this preview, I realized I haven’t seen a lot of these movies in a long, long time, and I’m jonesing to see John Carpenter’s work again. Hopefully, I’ll see you at the Savor Cinema Theater in Fort Lauderdale starting October 4th to do just that.