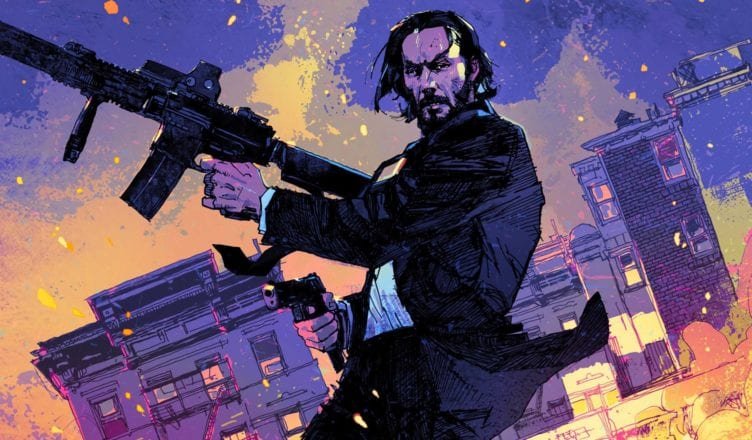 If you heard me in the theater during the  screening, you’d think I loved John Wick 3 Etc. I laughed and “OH!”’d quite a bit. But those reactions belied what I was feeling underneath, a creeping disappointment. Is this gonna be it? The same sh*t over and over? Not long after, boredom sunk in.

The movie is funny, stylish, nice to look at (love all the neon, primary colors, and rain), and filled with inventive ways of dispatching the myriad villains stupid enough to go up against Keanu Reeves. A protagonist, mind you, who is not the smartest guy in the room, just the most invincible. But it’s all surface; a shiny surface that feigns at self-aware stupidity. Underneath, it’s just stupid. Every time you’re about to catch on, the movie does something clever enough to dispel that notion a little longer. “Nah, I’m just overthinking it. I’m just being a drag.”

No. John Wick: Chapter 3 – Parabellum is a drag.

It starts promisingly with a knife fight between the protagonist and a bunch of assassins. I’ll pause here to catch you up on the plot. There’s nothing to it, so why not? John Wick, the uber-assassin from the first two films is on the run after his actions in Part 2. A price is on his head and every assassin in the world is after him. He tries to extricate himself from this problem. Caught up? Good. Now back to that knife fight. It’s clever and displays the gallows humor the franchise is known for, with one poor henchman becoming a pin cushion as Wick and the other bad guys throw knives at each other and keep hitting this poor guy instead, over and over. The choreography is good, and the fight, like all of the film’s action, is shot with a steady camera at a mid-distance that allows you to take in what the characters are doing. So far so good.

But the key term above is “over and over.” This movie, no–the whole franchise, loves itself some over and over. Sometimes it works, like the pin cushion, but mostly it’s mind numbing. The film’s motto is, if it works the first time, you might as well keep doing it. But how many times can you watch John Wick punch somebody, flip them, whatever, and then shoot them point blank in the face?

Even the non-shooting moments suffer from this repetition. A fight in a stable has an inventive moment when Wick slaps a horse on the back causing the animal to kick an opponent in the face. I laughed in shock. Seconds later, Wick’s floored by a second opponent. He gets up awkwardly, trundles to another horse and causes it to kick this opponent twice in the face. It’s the law of diminishing returns. There’s no shock the second time, so why do it again?

It took four writers to come up with the film’s script.

Four writers! Derek Kolstad, Shay Hatten, Chris Collins, and Marc Abrams had to put their heads together in order to write a film whose plot exists simply to waste time.

Of course, it ends on a cliffhanger. But it’s a particularly galling cliffhanger because the story promised for that theoretical sequel should, and easily could, have been the third act of this film. Instead, we’re left with what basically amounts to one act stretched to feature length without a villain to actively root against and without an actual ending.

Directed again by Chad Stahelski, who made his name as a stuntman before graduating to directing with the original John Wick, it’s clear that a lot of time and effort went into the many complicated fights and stunts. Kudos to the stunt teams and to Reeves, whose physicality is still impressive. But effort doesn’t equal excitement, and endless repetition definitely does not equal thrills. Mix that with a piss-poor plot and you have a nice-looking cocktail that’s nothing more than boring old water.