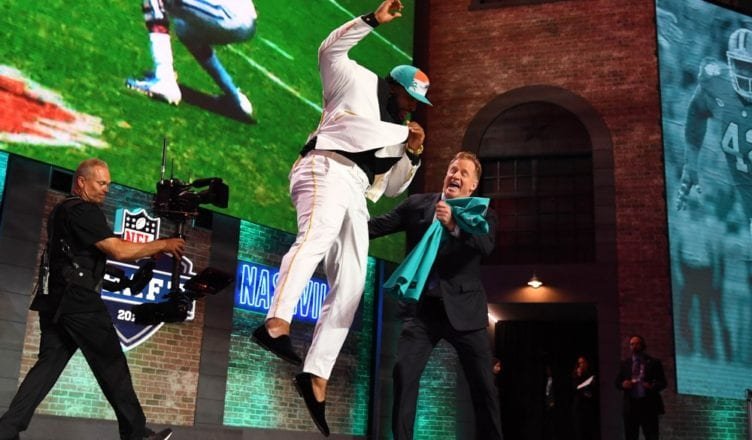 What is this strange sensation I’m feeling after the 2019 NFL draft?

Could this be what they call… hope?

As a Miami Dolphins fan it has been over a decade that I felt this optimistic. Though I originally had my doubts when Chris Grier was put in charge of the organization,   those fears have been erased after an off-season of actual, honest to goodness competence.

First Grier finally ended the long regional nightmare by shipping Ryan Tannehill away to Tennessee. It seemed when the Dolphins signed journeyman Ryan Fitzpatrick to quarterback that the plan for 2019 was to lose as many games as possible. Dolphin fans would suffer another wasted season so that we could have a top pick to draft a quarterback in 2020.

The first night of this year’s NFL draft seemed proof of this strategy when the Dolphins selected a defensive tackle with their first pick. While Christian Wilkins’ celebration for getting drafted where he put the fear of God in commissioner Roger Goodell was wonderful, defensive tackles do not capture fans’ imagination.

But then on the second night of the draft, the Dolphins did something rare. They took a chance. Not just a chance, a smart, calculated chance to fill the most important position in pro football. Coming out of UCLA last year Josh Rosen was picked by many as the best, most pro ready quarterback in the 2018 draft. He ended up the tenth overall pick, but went on to have a God awful season with the Arizona Cardinals.  So bad the Dolphins were able to trade for Rosen for only a #62 pick and a fifth rounder (there were further impressive trade machinations before that for the Dolphins to get that #62 pick that you can read about here).

A cynic could point out that maybe Rosen’s failures will continue throughout his career. But so many talented quarterbacks have bounced back from an awful rookie season to have stellar careers. The price was so cheap it was worth taking a shot. A shot other Dolphin regimes were scared to take. Like when we drafted an offensive lineman over Matt Ryan. Or when we took Ryan Tannehill over the too short Russell Wilson and stuck with him for an eternity. Or when Tannehill did get hurt and the Dolphins called a retired Jay Cutler to replace him.

I am not just proud, but stunned the team I root for finally made a smart gamble on a talented quarterback. So even if Josh Rosen is the second coming of Ryan Leaf or Johnny Manziel, on this late Spring weekend his arrival gives what Dolphin fans have lacked for oh so long.

What do you call this feeling again?