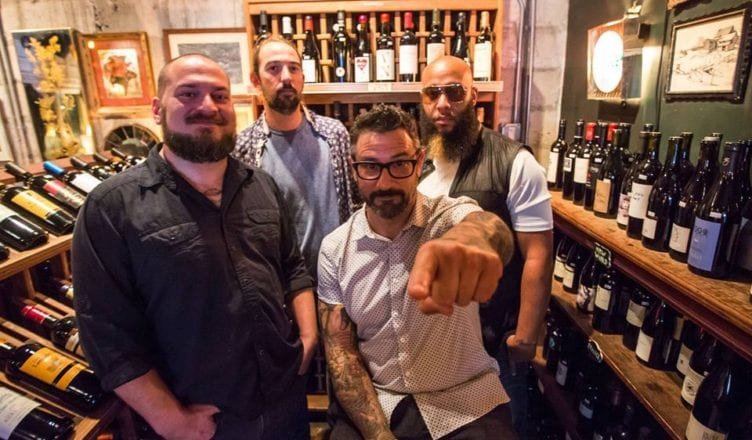 Almost exactly a year ago singer Eric Garcia decided his band Juke finally had the right line-up to record a live album.  With guitarist Sonny East, drummer Korian Hannah, and bassist Marcel Salas they went to Wynwood Yard to jam their blues inspired music. With the results of that concert finally released as Live and Fired, Juke are returning to the scene of the crime with a free show at Wynwood Yard, July 27, at 7:30 p.m. But before that Eric Garcia stepped aboard The Jitney to discuss the live album and their upcoming show.

What made Juke want to do a live album?

Eric Garcia: I’ve had this band for about 10 years now. We’ve released a couple albums over that time, but I’ve come to realize that we are more of a live band. By that I mean that Juke is essentially built to convey its energy in a live setting. We recorded one live effort down at the Green Parrot in Key West a few years ago with a totally different lineup. It would have been awesome if we did it right but that was more of a happy accident with a hand recorder. I’ve been with this lineup for almost two years and wanted to capture what we do now and what we are about.

What makes a good live album?

Well, it’s got to have that live feel like you are front row at a great show but without the drunk couple next to you that won’t shut the fuck up. How about that? Seriously, that’s mostly true, but isolating each instrument so you can pick it out without it feeling isolated is the trick. You’d ideally like the sound to kind of jump off the recording as a whole.

Are there any live albums you wanted to emulate?

Rush’s “Exit Stage Left” was the first live album I fell in love with. So, I guess that sets the bar pretty high. I liked some of the live Ray Charles recordings. Those old bands really knew how to play live cause that’s generally how they recorded in studio.

We’ve been fortunate to be somewhat accepted by the Jamband/Festival community. By that I mean that we have played several of the major music festivals in Florida like Wanee and such. That “Jamband” community has really become diverse and eclectic with a high level of musicianship. A very common practice at those shows is capturing them live by either the band releasing it right away or the fans recording on their own devices at the show. The qualities of those recordings vary, but it makes me think “How much of this do you really need to capture and listen to?” I know when I really get into a band I listen to a new album over and over and over until it’s really internalized. This over recording experience is just a way of listening I don’t get.

Can you go into the sordid reasons why you titled the album, Live and Fired?

Well, I was the Entertainment Director at The Wynwood Yard for almost a year and a half. I really love  the place. When we recorded this album I wanted to do a live thing at a place that I was comfortable and in control. So The Yard was perfect.  It took me a while to get around to mixing it. When I did it was with the great Andrew Yeomanson  (Spam All Stars) at his City of Progress Studio. But as I sent the material over to him, I realized that calling it “Live at The Yard” as I originally intended didn’t feel right. “Live and Fired” is just funnier and more accurate!

What emotions are you going to have before Juke’s triumphant return to the Wynwood Yard?

I have a ton of love for that place and the people who work there. I had a blast working there and I know I did a lot for it by bringing big bands that nobody else could. When I left The Yard, my services were taken over by The Prism Group. They are great at what they do, but they have never booked a venue as an “in-house Talent Buyer” so I knew it wouldn’t last for various reasons. I predicted they would last 6 months and they lasted just over seven. So they barely made the over. Also, despite the fact that Juke did very well there and the staff liked us they wouldn’t book me. That was a little bit of added insult to injury I thought. But the new bookers seem great and I’m just stoked to play music there again. It really can be a magical place when it’s right.

What else does Juke have planned in the near future?

I literally have volumes of Juke material that was previously written and performed with different lineups that I have been meaning to implement. I’ve been playing with these guys: Korian Hannah on drums, Marcel Salas on Bass and Sonny East on Guitar. We continue to evolve and it would feel like making a current girlfriend wear an old girlfriend’s clothes that aren’t even in style anymore!