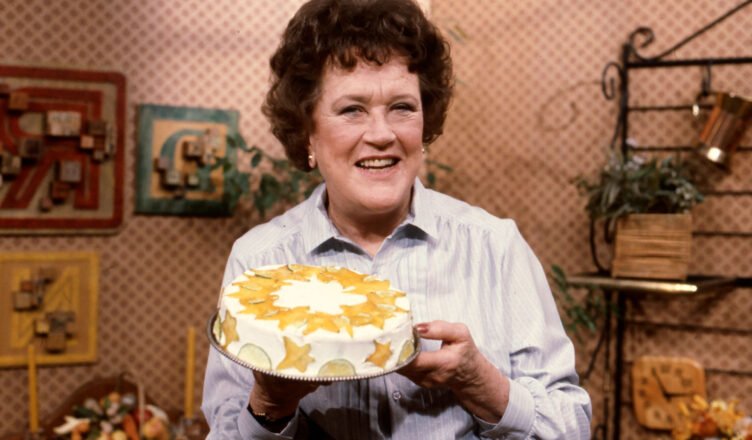 Julia Child is awesome. I’ve known this since I was a dumb kid, a know-it-all teenager, and now an emotionally stunted adult. The culinary legend was funny, blunt, and extremely knowledgeable as she towered–later, hunched over her kitchen counter, cooked delicious meals, and narrated it all with that uniquely wheezing sing-song voice of hers. Clearly, I’m not the only person who feels this way. She’s still a pop culture figure now, close to 20 years after her death in 2004. Iconic, poly-Oscar-winner Meryl Streep even played her several years back in the literally halfway decent Julia & Julia (I kinda loathed Amy Adam’s mostly unrelated portion of that movie). And now we have a brand-new documentary about the famous chef.

Julia is from the directing duo of Julie Cohen and Betsy West, whose last documentary about Ruth Bader Ginsberg, RBG, garnered strong notices, an Oscar nom, and pulled in 14 million dollars at the box office, no small feat for a documentary these days (…or any days, really). Like RBG, Julia is a celebration of its subject, more hagiography than a warts-and-all look at the person behind the public veneer. Think Won’t You Be My Neighbor, which worked to confirm the notion that Fred (Mr.) Rogers was, basically, the cool-ass dude we thought he was. In much the same way, Julia exists to confirm rather than challenge the public perception of Julia Childs. Frankly, I’m more than fine with that. Lemme keep my heroes.

As far as the presentation goes, Julia is a typical documentary in that it’s mostly archival footage, interview snippets, and talking heads from the present-day pontificating about the film’s subject. But since that subject is a world renown chef credited with bringing French cuisine to the U.S. at a time when frozen food was considered haute cuisine, the movie gives itself over to fussed over shots of delectable looking food steaming, simmering, and blubbering in bowls and on plates. Food porn, basically. In a nice touch, the filmmakers try to make it seem like Mrs. Child herself is making the food in those modern segments. Either that or it just happened to be an older chef whose aged hands we see crafting the food.

While the presentation isn’t revolutionary, the movie gets the most out of its tried-and-true formula. Cohen and West clearly know how to make a documentary that collapses a lifetime into an hour and a half without feeling like any loose ends are left untied. Not an easy feat, I assure you. True, the many facets of Julia Child’s life fly past at a breakneck pace, and you could easily make whole movies out of just one of those segments, like her growing allyship with the LGBTQ community, or just the initial hate to love courtship between she and husband, Paul. The movie, though, flows elegantly through this life story, like an experienced chef nimbly floating around the traffic of a hot, bustling kitchen.

And  you wouldn’t know it, but the movie is ludicrously romantic. Part of that is simply because Julia and Paul genuinely loved each other and wanted to be around one another even after decades of marriage. For a sourpuss like me, seeing two people fit like a hand in a glove, like two Lego pieces perfectly snapped together, like… Bert and Ernie, was balm for a pessimistic soul. It helps that the movie presents their romance so glowingly. Snippets of letters they wrote each other, some of which are stunningly romantic couplets from Paul, float across the screen over autumnal images while Rachel Portman’s gossamer soundtrack buoys the beauty of it all. It’s hard not to be swept away.

The movie left me with a warm, prickling feeling. I felt a renewed faith in humanity when it was over. It’s the exact feeling Julia Childs instilled in me all these years. Julia Childs is awesome, and Julia does a great job reminding you why.