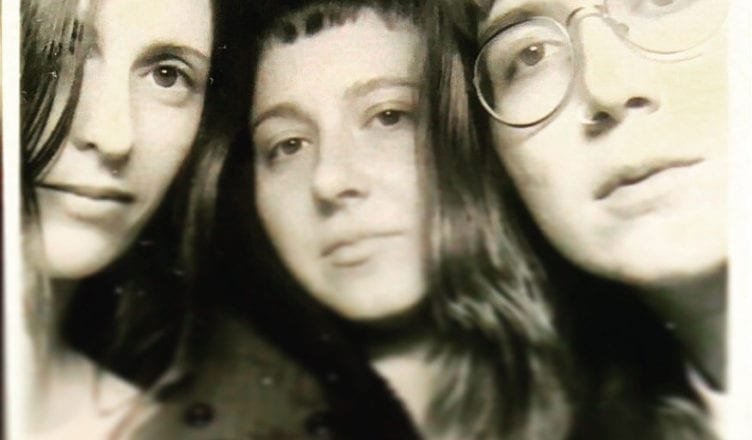 I’ve been following the musical career of Ale Campos ever since Rat Bastard played me her solo record Smvt Matter That Soils Blackens, recorded at his home studio in 2014. I was immediately blown away, especially with the intro song “No Me Toques.” It’s angry and makes the hairs on your arms wake up. It reminded me of the music I would mail order when I was teenager in the ’90s– 7”s from Kill Rock Stars from bands like Heavens To Betsy, Bikini Kill and Bratmobile. There’s something old school and new school about it with its intensity, rawness and palpable emotions.

Each of Ale’s following releases have evolved in sound and bandmates; Las Nubes is now a three piece with Emile Milgrim (MLE) on drums and Nina Carolina on bass. We can look forward to a full length release coming out later this year on local label, Sweat Records Records. Las Nubes was also recently featured in the Miami New Times as Miami Music Acts to Watch in 2019. Don’t miss their upcoming performance at Las Rosas with Palomino Blonde this Friday January 25th.

Oly: What’s your musical foundation? Is your family musical?

Ale: My uncle played bass for Warren Zevon and Glenn Frey, but that wasn’t an inspiration. I always wanted to play to be better than the boys. And then I discovered Green Day.

Nina: My dad’s a Brazilian jazz musician so I grew up with that and was playing percussion at 3 years old and listening to Bob Marley every day. Also, Spice Girls were a big inspiration.

MLE: There was always music in/around my house but no one pushed me toward playing. My stepdad was a baritone player and listened to a lot of fusion and prog rock, so that was cool. I dabbled in guitar and bass, sucked at both, tried drums, was told I also sucked at that, and didn’t pick it up again until my 20’s.

What was the first song you learned to play?

MLE: “Horse With No Name” by America

I’ve read you call yourself a punk rock Taylor Swift. Does it come easy for you to write pop songs? Where does the songwriting start for you, with a feeling/melody/lyric? Do you make yourself write or do you wait for the mood to strike you?

Ale: The “punk rock Taylor Swift” thing was actually a joke between me and a co-worker at Guitar Center. I used to just wait for songs to strike but lately I’ve been more inclined to write in certain directions. I usually start with a guitar riff. Vocal melody and lyrics come last.

Your debut Smvt Matter That Soils Or Blackens is an incredibly catchy and powerful album. Each following release, the sophomore EP Conveniently Broken and your last album Some Things To Let Go get better and better. Is there a mindset or theme when you go into working on an album? What have you learned from each release?

Ale: Through each collection I’ve learned that it’s OK to be cathartic and use the songs as a release. I would have never put that stuff out without people pushing me to release it. It was all sorta private at first, but the people I showed it to seemed to really like it.

There’s so many exciting things happening for Las Nubes, you just released your first single “Hell Bag” and accompanying music video from your upcoming album Smvt that will be released later this year on Sweat Records Records. The music video for those who haven’t seen it yet was filmed at Santa’s Enchanted Forest, a Miami oddity/ phenomenon. Is this your first official video? How did your collaboration with Fuzz Baby Records (recorded at) Nicole Mijares (filmed by) and Ryan Haft (mixed by) come about?

Ale: Yes, this is the first official video. Our former bassist, Johnny Love suggested recording at Fuzz Baby since his other band, Death Lottery liked recording there. Nicole and Ale have been friends and played in bands together forever, and Ryan is a friend and all-around incredible musician, engineer and supporter of the band.

You’ve changed your band name to Las Nubes and your upcoming album will be named Smvt, is this a way of retaining or reflecting on your musical beginnings? Why the name change? Is this a transformation or evolution of your music style?

Ale: There were a few other bands with the name “Smut,” and it was just a randomly picked name to go with the first release. It didn’t seem to reflect the newer directions of the sound.

Sweat Records Records is run by some of Miami’s most passionate music scene folks: Lolo Reskin, Emile Milgrim and Vivek Jayaram, how has your DIY ethic evolved working with them on this release?

Ale: When Sweat decided to move forward with the label, the idea of doing our full-length came up. We said yes. It’s still really DIY on our end for a lot of elements – booking, touring, merch, spirit animals, etc.

Both Ale and Emile work at the Sweat record store, is that how you started playing music together? Nina Carolina, how did you find your way to Las Nubes?

MLE: John McHale asked Smut to open for Shonen Knife in April 2017 and I was like “Yo! Lemme play drums!” Ale asked Johnny to play bass for the show and Lauren Palma (Bleeth, Prison Warder) asked if she could jump on second guitar. We played that and a couple other shows as a four-piece. Then we became a trio. After we recorded most of the album, Johnny left to focus more on Death Lottery, and Ale and I both thought Nina would be the perfect addition. She’ll be the first to admit she had a “band crush” on us, so it all worked out well. Plus, we got bonus harmonies!

What was your first, last and best concert you ever attended?

Ale: Does my mom going to see Paul McCartney while she was pregnant with me count? Best is Tortoise, most recent is Juana Molina.

Nina: First was Sepultura, most recent was a classical event at New World Symphony, best was Zetafest back in the day when I used to crowd surf.

MLE: First was New Kids On The Block, most recent of note was David Byrne, best was Lush for their reunion tour (never got to see them back in the day).

You are currently on tour, how is that going? Any fun/wild/strange moments you want to share?

Ale: Tour has been great! We definitely want to plan more in advance next time so we can book shows closer together and drive shorter runs (10 hours from DC to ATL was kinda nuts). We’ve had some of the most courteous hosts and local bands put us up and play with us. Some guy in a punk house asked us why we didn’t have roadies. He was dead serious, but also unaware he lived in a punk house (“wait, that’s what this is called?!?). We celebrated a speeding ticket with ice cream, and have been followed by the same Magnetic Fields song on shuffle (“Smoke And Mirrors”). Lots of cute/cool tour animals, and plans made to do some upcoming dates with our newest band crush Calyx from Pittsburgh.