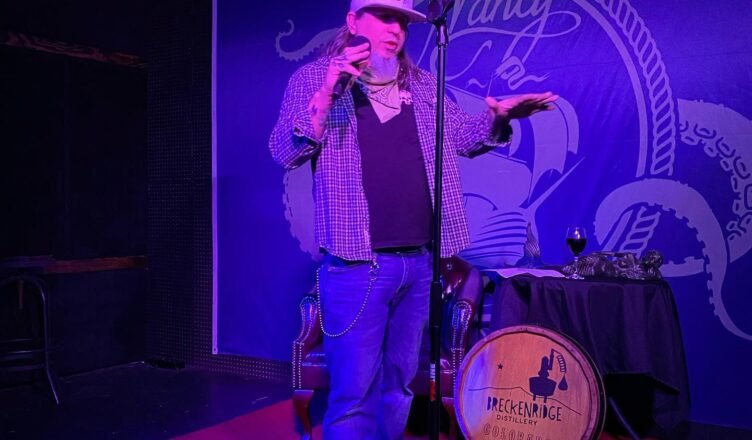 It started as a selfish thing.

A way for me to practice very personal stories about my life for a one-man-show I decided I needed to do. I was an out of work musician with nothing but time during a pandemic.

An old friend of mine gave me the idea to put together this show to be performed whenever this whole thing is over and people could sit in a theater again.

However, I quickly realized that my live music experience had little to do with the ability to stand in from of people with just a microphone and talk about my life and the fuel for my songs.

I was scared to do it. So I knew that I had to.

I needed a place to work on this new craft of mine. This new genre.

Bar Nancy became that place when they gave me Wednesday nights. Uncle Scotchy’s Storytelling Extravaganza was born, and I could not have anticipated what would develop since last September.

I would make new friends. New friends who I would know better than people I had known for years because I would hear them tell their secrets and bare their souls in front of a room full of strangers.

I would also get closer to friends I already had for the same reasons. But new friends or not, a growing group of people show up every week. They walk in the door, masks on, and sit down ready to hear stories from people they have never met in their lives.

The storytelling format is simple. Four storytellers per night.

Stories must be 10 – 15 minutes. They must be true, and they must be about the storyteller. We take 15 minute breaks between stories to clear the mind and maybe have a smoke in the courtyard out back.

I’m booked weeks out with people from all walks of life. This last Wednesday was a great example.

Pauley Mcpaulerson, a super talented comedian and voice actress, told a hilarious story that involved her husband and how much they loved each other a couple of months back. Pauley promised she would try to get him to tell a story and finally she delivered not only him, but his buddy as well.

Her husband, Travis, was super nervous. I had him going on after his friend, Alex, who I scheduled to go first.

Alex didn’t seem nervous at all.

Alex’s story was really good, but he kind of realized while telling it that this wasn’t like talking to your friends during a short walk outside.

He even said “This is what happens when you don’t prepare your story” while onstage.

He got through it, but I could tell he could have told it a little better. More importantly, he could tell that he could have told it better and seemed a bit inspired by that. It was obvious that it wasn’t a stage fright issue. It was more structure. Stories are like songs. Even the easy songs need some TLC. He’s a musician as well, so he got it. We discussed it in a really healthy way and I can’t wait for Alex’s next one.

Travis was up next.

He told a super personal and revealing story about himself, his battle with his mental health, and how his love for Paulie made him a better man.

I did not know that one could Baker Act one’s self, but apparently he had.

The thing about it was that a lot of it was funny. He was self-aware and engaging. Being able to laugh at himself, respond to the crowd, and convey that vulnerability was endearing. He had clearly worked on his story and fought through literal shaky hands to tell a great tale.

Third up was a local legend.

Tommy Strangie, aka. Shelley Novak, has been a very talented and well known drag queen in Miami for forever. Shelley even hosts and annual awards show for the rest of best drag queens in Miami.

Dressed in civilian attire. Tommy absolutely crushed it, as expected.

I even named this episode of the podcast after this story. It’s called, “A River Runs Through It”.


Before the final story, however, a surprise walked in the door. Quickly ascending local comic, Danny Benavente, had arrived and asked to do a quick five minutes.

Danny told his tale about growing up looking white, but being Nicaraguan in Wisconsin. He told his story at the very first storytelling night of mine and was a big reason why so many local comics are hitting me up now to be a part of this

Lastly was kind of a big deal.

The venue’s owner, Ben Koufopoulos, was about to tell his first story.

First story on stage, that is. Ben had millions of stories. I had heard many of them, as we’ve worked together on and off for years at different Miami venues.

Ben told a very well told story. The work he had done on it was apparent and his pacing was great. It was a tale truly from the heart about how he grew up and events came to be that led him to owning Bar Nancy. The story was heavily about his father and his brother. The best part was that they were both there! His brother, Tom, was actually moving away from Miami the next day.

It was a perfect night and moment for that story.

I asked Ben how his first story went.

He said, “Aside from getting over the nerves and anxiety…it was cool to be on a stage for those 20 minutes and have people listen. If it’s something you even might want to do because you have something to say… do it. What’s the worst that could happen? Exactly.”

This one I didn’t, but I like to remember the stories I heard on and off the stage. I like to think about what I could have done better as host even.

Then I got a message from Travis on IG. The Travis I had just met the night before for the first time and impressed me with his emotional offering.

It read: “Without the risk of sounding hyperbolic, you created a life changing experience for me on a cellular level. An interior change no medication or surgery could have provided. I only wish we’d gotten a picture together. Thank YOU my friend. It was also great just talkin to ya. See you soon, I’m sure of it.”

I’m sure of it too, buddy. And thank YOU.