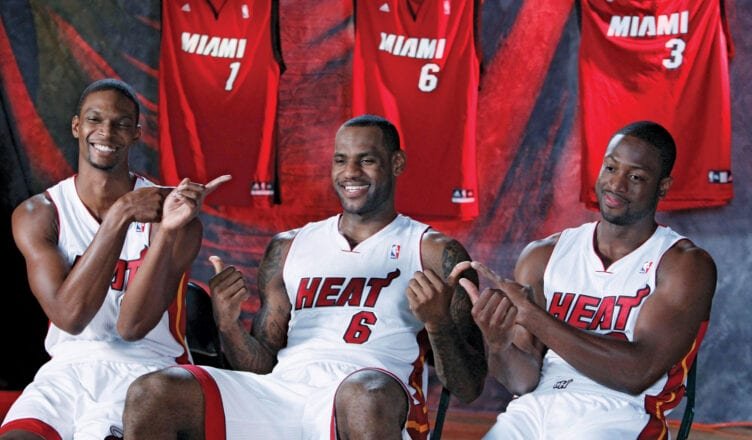 Like many hoopheads I’m smitten with the new ten part documentary The Last Dance. The mini-series about the Michael Jordan era Chicago Bulls has been so good at evoking nostalgia and drama out of events of which we already know the outcome, it demands a sequel. Since a documentary about the Luol Deng era Chicago Bulls wouldn’t pique the same interest, the obvious sequel route would be to showcase Jordan’s Bulls spiritual successors, the Big Three Miami Heat. With apologies to the Shaq/Kobe Lakers, the 2010-2014 LeBron era Miami Heat is the only basketball team  to capture our collective attention the way the ’90’s Bulls did. Here’s a guess of what ten episodes of a LeBron’s Miami Heat’s version of The Last Dance might look like.

Episode One – The Decision

How long had LeBron James, Dwyane Wade, and Chris Bosh conspired to play on the same team together? Had it been a plan for years or was it a spontaneous decision made in the summer of 2010.?What exactly made them take their talents to Miami of all places?  The episode could all culminate on the night of July 8, 2010 when on an hour long television special infamously titled “The Decision” LeBron James announced he’d be “taking his talents to South Beach”.

On July 10, 2010 the Miami Heat hosted a welcome party celebrating the signings of LeBron, Wade, and Bosh. The three players flexed and posed like professional wrestlers. LeBron announced the Heat would win not two, not three, not four, not five, not six, not seven championships, and immediately out came the vitriol. Lebron’s former team owner Dan Gilbert wrote an open letter calling him narcissistic and cowardly. And those were some of the kinder things people were saying about LeBron as the Miami Heat became the most hated team since the Bad Boy Pistons of the ’80’s.

LeBron, Wade, and Bosh had to this point in their careers been hailed as heroes.  Suddenly they were booed viciously in every visiting arena they played in.  Growing pains, learning to coexist with new teammates and a severe injury to supporting player Mike Miller led to an extremely disappointing 9-8 start to their first season. When LeBron shoved coach Erik Spoelstra walking off court during a timeout in a loss to the Dallas Mavericks, everyone thought the wheels had already fallen off this bandwagon. LeBron even asked Pat Riley to fire Spoelstra and take over as coach.

After an up and down regular season, the Miami Heat dominate the 2011 playoffs. They trounce their rival Boston Celtics and Chicago Bulls. In game 4 of the NBA Finals they were up 2 games to 1 and had a nine point lead in the fourth quarter when LeBron James seemingly forgot how to play basketball. The Dallas Mavericks humiliate the Heat with their barely six foot point guard J.J. Barrea outplaying LeBron. The Mavericks win the championship and the Heat spend a longer summer than usual as the sporting world’s laughingstock.

A shortened 2011-12 regular season due to labor strife leads to a playoffs ripe with drama. In the second round the Heat with Chris Bosh injured find themselves down two games to one to the Indiana Pacers and then in the Eastern Conference Finals are down 3-2 to the Boston Celtics but find themselves on the right side of history in both series. The Finals are almost anti-climactic as the Heat take down the Oklahoma City Thunder 4 games to one winning the clincher in a blowout. All of a sudden it looks like they could win not one, not two…

The entire hour long episode would deal with the making of this 2013 team video of the Harlem Shake.

With new additions of sharpshooter Ray Allen and the tattooed 21st century version of Dennis Rodman in Chris “Birdman” Andersen the Heat reach new heights. They win 27 straight games, the second longest winning streak in NBA history. Even more remarkable at one point, counting the playoffs, they win 46 out of 49 games. A repeat should be easy.

Like all historic teams, the Heat find a way to win a game they had no business winning. The San Antonio Spurs were a minute away from a championship. Up three games to two against the Heat with a five point cushion, league officials were preparing for a Spurs coronation. But then came one of the most iconic moments in sports history, Ray Allen’s last minute game tying three. It took an overtime period and another game, but the Heat pulled it out becoming the first back to back champs in a decade.

The 2013-14 season was lackluster. The Heat players seemed disinterested, knowing at this point from a historical perspective regular season victories were meaningless. The biggest drama was what would LeBron James do in the coming summer when he would be a free agent? The Heat cruise through the Eastern conference playoffs and in the Finals play a rematch against the Spurs. The first two games in San Antonio are tight. The Heat lose a close one in game one when LeBron sits out the final minutes with cramps when San Antonio’s arena’s air conditioning breaks. Game two is won by the Heat with a last second shot by Bosh. Then something peculiar happens. The Spurs blow out the Heat in the final three games in record setting fashion with LeBron seemingly as disinterested as he seemed in the regular season. Could this be foreshadowing?

On July 11, 2014 Sports Illustrated ran a ghost written letter by LeBron about how he would next season play for his hometown Cleveland Cavaliers.  The Miami Heat manage to keep Dwyane Wade and Chris Bosh, but nothing is the same. LeBron manages to win one more championship in 2016 before running off to Los Angeles in 2018 chasing history and happiness. The Big Three era which started off like a supernova, now seems like a shooting star. A tiny blip of beauty that much too quickly evaporated.