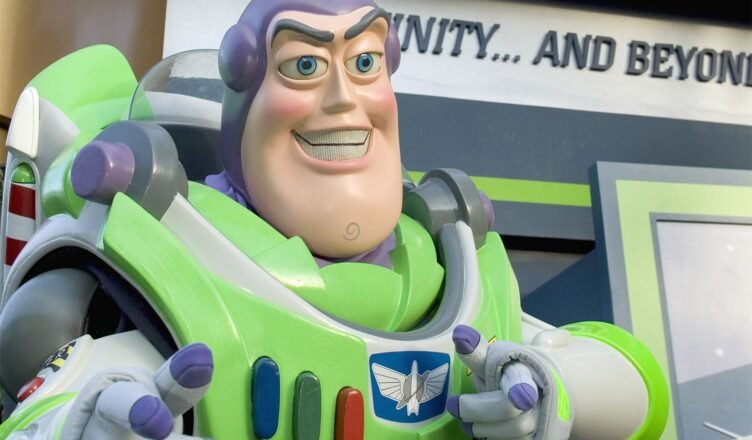 The last few years if you wanted a good cry at the movies, a Pixar movie was the way to go.  Toy Story 4 reminded us how we all move on from the innocence of childhood, Soul opened up the waterwells on how all lives have value, and if you’ve seen Up you’ll never emotionally recover from the movie’s first  few heartbreaking minutes exploring how fast and fleeting our lives can be.

Lightyear is the first Pixar non-tearjerker in a while. It wades in the more familiar realm of exploiting a beloved property in Buzz Lightyear from the Toy Story movies and stretching a feature film out of his adventures.  The opening text reveals the premise, this is supposedly the movie that made the kid Andy from Toy Story want a Buzz Lightyear doll in the first place.

As cynical as the movie’s reason for being might be, it’s still a fun way to kill an hour and forty minutes. Pixar does try to occasionally sneak in some poignancy and sentimentality into the cartoon, but for the most part it’s a no frills wham bam  sci-fi action flick with even the hint of a fart joke thrown in.

Old school Toy Story fans might find it a little jarring to see Lightyear’s hair without the familiar astronaut helmet obstructing it. They might also be a little disappointed that they couldn’t find a way to insert his buddy Woody into the proceedings. But after the success of this movie I’m sure a Woody stand alone origin story is only a few years down the line.


The Phantom of the Open

If you would like to give your tear ducts a workout, might I suggest the new British movie The Phantom of the Open? It’s based on the true story of Maurice Flitcroft, a working class bloke who year after year conned his way into competing in the British Open golf tournament. Flitcroft is an incompetent golfer, but he’s portrayed as such an astoundingly decent individual you can’t help but to root for him to get his moment of glory.

The filmmakers might cheat a bit at tugging at audience’s heartstrings by portraying Flitcroft and his loving wife as more pure souls than experience among humanity would suggest is possible.  But there are much worse cinematic crimes than lying to an audience to give us a much needed dose of feel good.