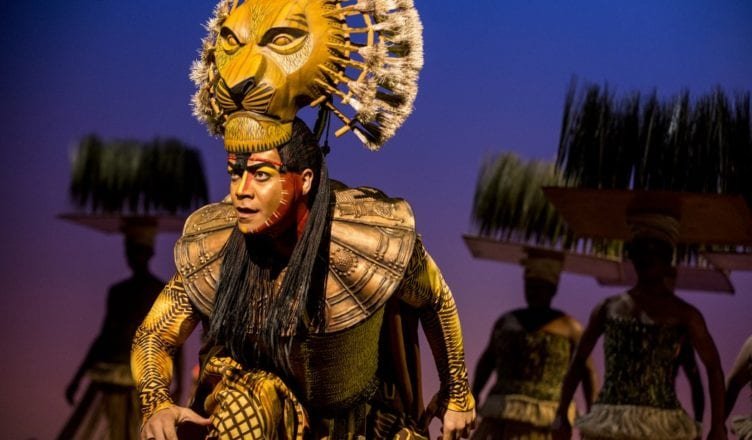 “Hey, that’s pretty cool!” was pretty much my reaction to catching  The Lion King in Miami from beginning to end. The show, based on the animated Disney film, debuted in 1997 and has since become the top grossing Broadway musical of all time, so a lot of people probably thought the same thing over the years.

You all probably know the story already, so I’ll just sum it up quickly. The Lion King is basically Hamlet, but with anthropomorphic animals.

Is there any depth to it? No more than the movie it’s based on. And it’s a lot like the movie. Two extra numbers stand out, though. One is kinda creepy: Scar, the evil lion who’s usurped his brother Mufasa’s throne, woos an adult Nala. He’s known her since she was a cub, which…just no. The other is more successful, with Mufasa singing a song to his son, Simba, heir to the throne, about how he will always be there for his him, even after his death. It’s a quiet number that focuses on emotion and on the power of a good singing voice.

Most of the musical numbers, though, are huge and colorful… And I zoned out during a lot of them. There’s so much happening on stage, it becomes too much to take in. The voices of the singers get lost in all of the brouhaha. I kinda went into autopilot.

But that brouhaha is impressively realized. What’s compelling about the show is how it translates the film to the stage. I wondered how certain sequences would be brought to life. Like the memorable, CGI stampede that sets the stage for Mufasa’s murder. Would they take the easy way out and simplify it to something a little less dramatic?

No. They go for it and somehow suggest the grand sweep of the film with a bunch of people in antelope costumes, a rotating spit of mechanical antelopes, and dramatic lighting and sound cues.

Same goes for a grown up Simba seeing the spirit of his father Mufasa in the clouds. It’s cleverly done, even a little awe-inspiring, causing the audience to erupt in wild applause.

In addition, the acting is fine, though some of the singing a little undistinguished. Rafiki is crazy loud and energetic. I probably could have done without the overly-anxious-to-be-annoying young version of Simba. But I’m not going to bitch too much about a kid actor who goes out every night on stage and does his best. It’s a tough role to play because, let’s face it, Young Simba is kind of annoying. The “I’m above the rules, can’t wait to be king sh*t” gets tedious fast.

I liked the little details of the production design. How a drought is represented by a tarp that looks like a lake slowly disappearing, shrinking as it’s pulled into the floor. But, you know, the real reason we pay money for this and have been for over 20 years now: The spectacle. There’s tall giraffes loping across the stage, their necks high enough I got a good look even from my fourth tier box seats. There’s giant elephants walking through the aisles, and other detailed costumes parading on stage, all covered in elaborate designs. In time, I probably won’t remember the singing or the acting, but I sure will remember the visuals.

So if you haven’t checked it out yet, you might want to give The Lion King a look before the curtain goes down on its final Miami show this Sunday, May 26.