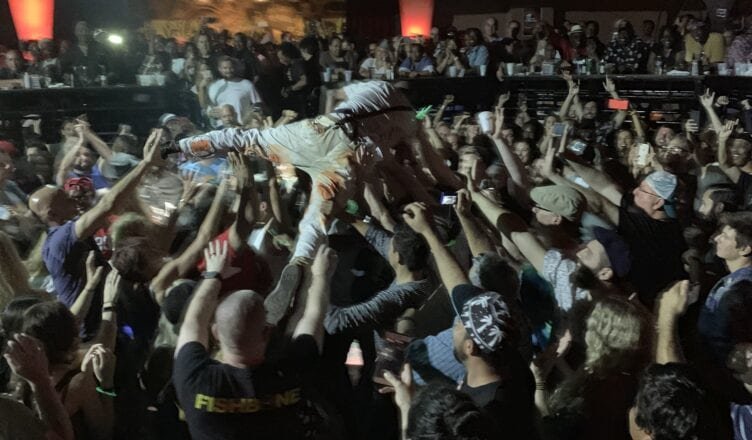 It takes a lot to scare me, too. I’ve been around a long time and I’ve seen stuff. Believe me.

I remember The Cold War with Russia when I was a kid. Every movie was about a nuclear war breaking out any day. I was convinced it was coming at any moment.

My father eventually was the one who convinced me that things like this pop up in society from time to time and the world tends to self-correct. That all I could do was handle my own, stick with my loved ones, and all will be fine.

I haven’t been scared of world events since.

Now, after over two decades of predominantly making my living in the booking, playing, and event directing of live music…this is a thing. A monster. The whole basis of my creative and professional purpose was getting people to congregate. The more people you can fit in a given space to have fun and monetize the better.

It’s a tough business and I’ve never been afraid of confrontation. But at the end of the day, I’m a man of the people.

For the past 17 years, I’ve been balancing my music based career with caregiving. First for my mother who took ill and passed after a seven year battle with her disease. Then with my father, who was broken but too tough to die for 10 years. Being an only child to loving parents bears some responsibility and I believe I fulfilled my duties to both of them.

I don’t want a parade, but I have to explain the magnitude of the timing here.

My plan was to begin when my caregiving days ended, which happened to be a few months ago. Figured I’d give it a few months for the dust to settle and affairs to sort. I planned to finally book and play some extended tours with my band using all the resources, connections, and favors I had built over the years. I also had a great plan to grow a business furthering my involvement with the Festival at Sea cruise industry that I had been building the better part of seven years.

Needless to say, this pandemic has taken a hacksaw to my plan, placed it on a boat in the middle of the ocean, and then filled it with gasoline and blown the thing to hell.

The venue I was booking just laid me off. All cruises I worked with are cancelled for the year. God knows when I’ll play a gig with my band again.

What does one do now? “Adapt or die” I keep hearing. That sounds a bit grim, but accurate. However, what does someone with my age and skill set do for money now?

Now, I love Trader Joe’s, but haven’t you noticed that there is always one kind of cool older dude that works at each one? He seems to be enjoying his job. You know he’s got some stories, but it’s weird to ask him what his deal is when he’s stocking the orange/nutmeg cookies for Halloween.

I don’t want to be that guy. That’s my biggest fear.

The most logical alternative at the moment seems to be virtual performance and festival world. On any given night I can see the most obscure to the most famous artist playing at home. It’s amazing how the live stream production quality has improved the last couple of months. Technology struggles to keep up and be first as artists gobble up new tech just for the chance to be heard again. Heard and make a buck in their “virtual tip jar” consisting of Venmo, CashApp, or PayPal donations.

If I can go online and listen to every Led Zeppelin album for free, who am I to charge for my record as an up and coming band?

Now major festivals and the slicker bands are broadcasting live performances with high production quality from actual live venue and festival stages all over the world. Not the same as going to a packed show, but it’s something. It’s literally the virtual Wild, Wild, West right now for the industry. The tricky part is to properly monetize it. The next logical step seems to be sponsors getting behind live feeds that draw clicks and can provide the analytics to prove it.

Here is one fact I realized that I have to accept:

It doesn’t matter how long one has been in the business or what you feel you have earned. The ones who will find a way moving forward are those with foresight, tech savvy, and creative/social reach.

Guys like me, we’re dinosaurs now. They might as well build a display in the Smithsonian with a wax figure of me leaning against the bar with a cigarette and whiskey; watching a band while the venue’s owner talks incessantly in my ear.

They are the last who will be able to open. Even then, who wants to go see a band at a small live music venue of say 125 capacity with just 20-25 other people standing around apart from each other. Opening/staffing costs will go up, while profits would be impossible. Those venues are attempting to open up with new rules, less capacity, and higher prices to subsidize.

People don’t realize the cost of  a live music venue. It’s not only the cost of the band and soundman. There’s promo, flyer person, staff, liquor cost, possibly food… not to mention insurance and fees. The list is endless.

The National Independent Venue Association (or NIVA) is scrambling for answers and unity. They recently formed as a reaction to this crisis. But until we know more and some sort of national plan is implemented it’s pure chaos. Bands that finally start to tour will be faced with different rules and obstacles in each separate state, town, and venue according to ever changing local laws and restrictions.

Why bother? But what are the options? All that while risking contracting COVID-19.

This viral threat is definitely going to be here in some form for quite some time. It’s not something you can “believe” in or not, as some are saying. It isn’t Santa Claus or the goddamn Easter Bunny. Politics aside, we have a mess on our hands that no one seemed prepared for. Live music is a part of our culture that must be protected and sustained. It will be interesting to see how that evolves and preservers.

If you don’t wanna say hi when you see me stacking shelves w my Hawaiian shirt on at Trader Joe’s, I totally understand.