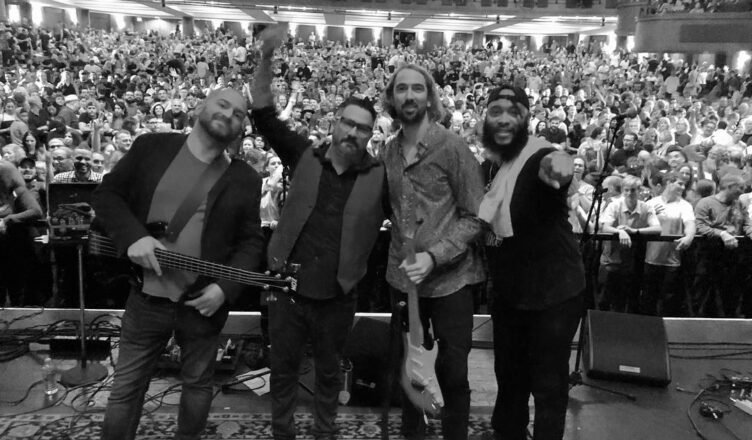 My amp is tucked away in my storage closet. It’s tubes are cold and hibernating. My pedalboard is just another thing amongst musical clutter. Sitting there like just something in a cool, indoor yard sale that nobody showed up for. Sure there are guitars and other instruments, recording devices, mics, and interfaces strewn about… But the hermit-vibe is strong here.

I used to play out at least once a week with my band or solo act for the last 15 years or so. I’ve been playing a lot longer than that.

Now it’s been 3 gigs in 4 months with no more in sight now that this is getting worse. Even the gigs that I played were for less money and  less people because the 50% capacity rule that has since been demoted to 0% capacity here in Florida. Of course, Florida.

I watch the news way more than I should now.

Almost like I’m waiting for some actual “Breaking News” this time. Holding on to a glimmer of hope that someone will appear and say, “Hey! We got it! Totally figured out the vaccine thing, so we’re all good now!”

But that never happens.

It’s just talk about getting people back to work. Opening schools. Opening restaurants. Those poor waitresses out of work again. Those poor hairdressers having to wear masks and shields just to cut hair.

What about musicians and live music?

Why are we forgotten?

Is performing live music not a “real job”?

Our industry is decimated and the whole ecosystem we exist in is abandoned. Great, historic venues all over the country are empty.

The business of joyous congregation and expression through live music is dead and no one even knows when any sort of resuscitation can even be attempted.

The worst part is that we’ve been getting set up for this coup de grace for a while now. People stopped buying music years ago starting w the whole Napster thing. Now it’s Spotify, Pandora, YouTube, and tons of other free or subscription outlets.

The plus side to all that is that bands/musicians have access to millions of ears who might not of ever heard them or of them.

I will definitely concede that.

The down side is there is so much music out there and bands have to play live and tour to make any real money.

Live music gigs are a HUGE part of their revenue stream, which of course, branches out to the venues/bartenders/etc.

The other source is pedaling band merch like some sort of pop up flea market everywhere they go and online.

A band is measured and quantified by how many people follow their social media platforms. It’s what they are judged on when getting booked, and it bears directly on what they get paid.

The implied ability to get people to congregate and stay that way. The problem is, congregations are now The Boogeyman.

So, what do we do now? Huge acts and tours have all come to a grinding halt.

An optimist might say that whenever things start to open up there will be more opportunities for local acts to work and feed the need to see a band.

However, I am not an optimist.

Virtual festivals are evolving. Live feed equipment is advancing. People are doing what they can.

But I think it’s pathetic…

Artists who have been playing all their lives are playing in their living rooms for you send money to their “virtual tip jar”.

These people (many of them, anyway. Certainly not all;) have slaved away for countless hours on their craft. Fallen asleep with their instruments in hand. They have forgone the security of what is considered a “real job” by literally betting on themselves and their talents. Their talents to express themselves to others so that they get paid for it, criticized for it, and possibly adored for it.

Many people think of musicians as lazy people, and a good deal are. But the ones in real trouble now are not the lazy ones. It’s the ones that play because they have to. They are brave, brave people. They would rather make ends meet with some side job that is beneath them if they have to just to keep their dreams alive.

The ironic thing is that they play for others to hear, and see, and experience. They play to please “You.” That is how they make their money.

They play for the people who have forgotten them because they want a haircut and don’t want to wear a fucking mask.

What does society do now without these people? What happens to a culture that has amputated live music? We all may not feel it now, but I believe that eventually we will become sick. Sicker than we already are as a society. Live music is like a vitamin that we have grown dependent on over thousands of years of cultural development. It’s nutrition made us better, more interesting, and more evolved culturally.  Just as if we stop eating our (musical) vegetables. At first we won’t feel very different, as we keep eating the fast food news cycle.

But after a while, our sociological immune system will become even more vulnerable to germs like hate and distractions that have no substance.

Live music is one of the oldest forms of  cultural expression that humans have. There simply can’t be zero consequences for the long term absence of that for both musicians and audiences.

So, at this point I can only appeal to the stronghold of mavens and cultural pioneers to go the extra mile to nurture what we have left. To find creative ways as promoters and philanthropists to keep live music going.

There have been promoters, mostly in Europe, putting on drive-in concerts. That is a tremendous amount of effort to put something on that doesn’t seem to maximize space, but is cool, noble, and real. Something for the true live music fans.

Eugene Snowden, is one of the best and most entertaining front man I have ever seen…anywhere. He’s up in Orlando mostly with his bands, The Legendary JC’s and Eugene Snowden & Ten Pints of Truth ( look him up and buy a damn t-shirt!).

As beloved as he is, he’s been hustling hard these days and agrees with me that musicians are last on everyone’s give a fuck list. But he’s been playing some cool private events that people put together. Small gatherings that people socially distance, pay a cover (remember a “cover charge”? Google it.) and enjoy live music in a setting that respects the artist financially as well as appreciatively. In other words, they planned with care and made a special effort to do it right so everyone can enjoy the show safely.

Therefore, I do have some hope.

The musical world is a dry wasteland that no one seems to have time to water. Most things can’t survive these climates. But our music is ancient and in our DNA.

One day there will be a cure for this Covid; or at least a sensical way that we can congregate again as humans were meant to do.

There will be music, there will be joy, and there will be love that rains down on this tundra of fear and ignorance. From that rain the larvae will awaken and will fly again. Like musical locusts.

The locusts will swarm the skies of every city and repeat that ancient question to the venues of salvation, “Hey man, you got any gigs I can play???”