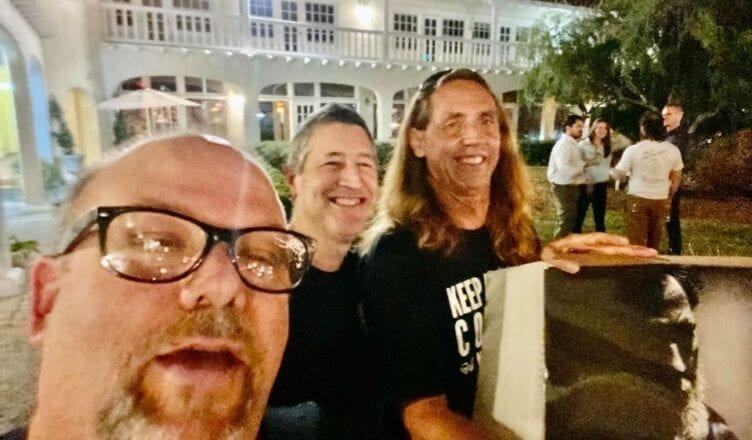 “That is Barry Stock. And that is Rob Elba.” So begins each episode of That Record Got Me High podcast. In one, fast-paced hour, they flood you with more information about a record than you may have thought possible. When they’re through, that record will never be the same again. Guaranteed.

As the name That Record Got Me High implies, they or a guest pick an album that is meaningful to them. Barry and Rob then dissect the stuffing out of it. The resulting podcast is chock full of nerd-like information, but yet funny and entertaining as well. The duo play off each other effortlessly.

Their plan from the get-go was to figure it out as they went along and upgrade their audio equipment as their finances allowed. The important part was to be consistent. 104 consecutive episodes later, it’s fair to say they’ve hit the mark. Furthermore, the podcast is even better now.

Rob Elba: I found myself listening to music podcasts and getting annoyed. I felt Barry and I could do it better. I know. How many people say that and don’t do anything about it? Well, we felt it was important to actually do it. So, with just our phones we recorded the first episode, Radiohead’s OK Computer. That was April of 2018.

Barry Stock: I have a penchant for getting to the root of things. I enjoy the detective work. Rob on the other hand, prefers digging in to the people in the band and the history of the group. We attack the album from different perspectives.

Barry: Adding guests was the third secret sauce. They bring a perspective we may not have thought of. We are able to play off of them, and off each other.

Rob: Yeah. People could get sick of just Barry and me. Guests bring something that’s unexpected. Even if it’s an album we don’t love, we are willing to hear why our guests love it. Instead of bad mouthing the record, we try and find common ground.

Barry: One of my favorite episodes was an artist I don’t particularly like (Howard Jones). The guest, Cathi Marro, was so passionate in discussing the record we at least gained an appreciation we didn’t have before.

That’s what makes the podcast so interesting. The audience gets to listen to albums they may have otherwise skipped and learn things they probably never would have. On the last Wednesday of each month, there’s even an exciting live taping of the show at Laser Wolf in Ft. Lauderdale http://rusbankinfo.ru/zaimy/moneyman/.

You will find the entire library of That Record Got Me High podcast on every streaming platform including by clicking here. A new episode is released every Saturday. If you enjoy the podcast, and you will, please consider becoming a patreon. For as little as a dollar a month, you will be encouraging Barry and Rob to keep getting us high on music.

What record got you high? Tell Barry and Rob about it at trgmh33@gmail.com. They may even ask you to join them as a guest to discuss it. Let the brain flood begin!