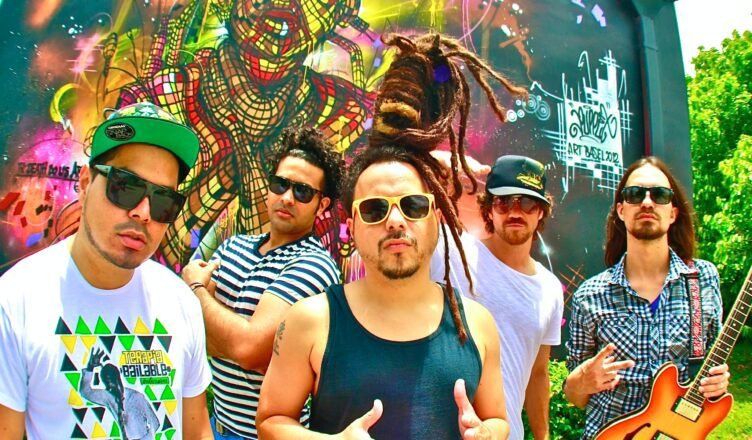 This Thursday night, December 15 at 8 pm The Rhythm Foundation are hosting their free holiday party North Beach Social at the Miami Beach Bandshell. This social promises to be a hell of a party with Locos Por Juana taking the stage.   The Jitney will have a table at the back where we will have a pleasant back row seat to all of Locos Por Juana’s hip shaking beats.

For over two decades now Locos Por Juana have served a bouillabaisse of rock, hip-hop and reggae. It’s all stirred into a hearty base of Colombian rhythms of cumbia, champeta, mapale and chande. The current iteration has frontman Itawe Correa backed by guitarist Mark Kondrat, drummer Javier Delgado and bassist David Pransky. For this Bandshell show they also promise some of Miami’s “best horn players, guest vocalists and percussionists”.

Five years ago Locos por Juana had a superstar guest vocalist in hip-hop icon Talib Kweli join them on the song “For the Ladies.” When I spoke to Correa back in 2017 about the collaboration, the singer was over the moon about working with one of his favorite rappers: ”I grew up listening to him in the hip-hop era. Talib’s work with Mos Def in Blackstar changed my life.”

“We sent him the song, and there were no compromises,” Correa said. “He liked the message. About how beautiful women can be in any size, any shape, any color.”

The band’s newest single, “Redemption,” has a reggae vibe with lyrics sung in Spanish. The band says it is just a hint of what’s to come off their forthcoming album.  But that new record isn’t coming out until 2023. If you hope to hear their new songs earlier you’ll have to make it out to the Bandshell.