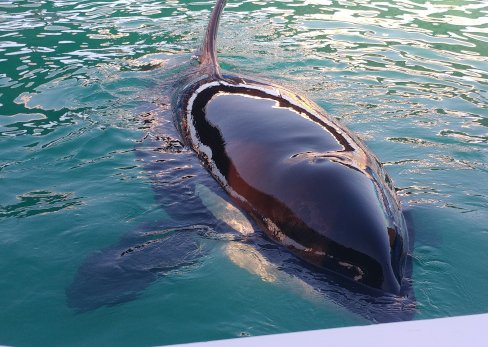 Last week when The Jitney posted an article about the new owners of the Miami Seaquarium, it included a quote from Seaquarium management.  As always they tried to discourage anyone from considering returning Lolita to her native habitat. Those tactics can and should be answered with science and facts, as follows.

The Seaquarium “claimed that Lolita wouldn’t survive the journey back to her home in the Pacific Northwest. And if she did she would either die of disease or spread disease to other orcas.”

First, the disease issue was also raised when Keiko, another captive orca, was headed back to Iceland. The solution was a team of six USDA-appointed veterinarians and pathologists to examine Keiko to be sure he carried no infectious diseases. He was declared healthy and was flown home to Iceland, where he became even healthier. Tokitae would get a similar examination prior to transport. Also, she wouldn’t “die of disease” because she has normal immunity even from novel pathogens, because she would be well fed and provided medical supervision and treatments to make sure she was doing well back in her old habitat. So that alarming claim is not credible.

Even more absurd is the claim that she might not survive the trip back to her home waters. They don’t say what they’re talking about, but most people, including much of the scientific community, the courts, and the permitting agencies, tend to believe them.

Let’s take a look at how and why she would not be shocked, but would remember her home and family, and who she is˗̶ a member of her mother’s family and community.

A landmark paper came out 20 years ago called “Culture in Whales and Dolphins” that established that: “the vocal and behavioral cultures found in orcas appear to have no parallel outside humans and represent an independent evolution of cultural faculties.”

Field studies around the world have confirmed that orcas everywhere belong to traditional cultures. Currently scientists have proposed 22 distinct orca populations, but others have not yet been documented.

A recent paper describes at least three newly identified populations around New Zealand and western Australia, based on genetics. Genetics correlate perfectly with cultures because there is no interbreeding between the different populations. That tells us something.

Among the traditions found in orcas is to limit mating to members of one’s own community, which is a big extended family. That raises some questions about interbreeding, but that tradition is practiced by every member of every known population and has been for thousands of generations.

This is very strong cultural influence over behavior, in this case, mating.

A wide variety of separate and distinct cultures have now been described, each with its own vocal repertoire, specialized diet, ways of catching food, association patterns, etc. Orcas learn from birth how to live as members of their cultures. Orcas are well-developed at birth, and are catching their own food before their first birthday. Lolita/Tokitae was about 4 years old when she was captured. At the age of four she was fully competent to communicate with her family, catch her own food, and behave as a member in good standing of her family and community. Those memories don’t go away no matter how long she’s away from them.

According to a recent study of orca brain anatomy: “The brain of the killer whale (Orcinus orca) may be the largest of all taxa supporting a panoply of cognitive, sensory, and sensorimotor abilities.”

At birth orca brains are already three times the size of adult human brains, and will grow to over five times the size of ours. Sounds reach the developing fetus undiminished through the liquid medium of the womb during most of the 18 months gestation period. So orca calves are hearing their families’ voices and learning their communication systems even before they’re born.

Cultural learning and identity as family members are deeply engrained in orcas. They have very big brains, which implies long memories, and nothing is more important to an orca than their family and traditions, and how to catch their special diet.

Young orcas build deep, life-long, emotional bonds with their mothers and their entire families. They learn everything from them, including who they are as family members.

Lolita/Tokitae is, and always has been, part of her extended family, since birth, despite now 51 years in a tank in Miami. With those memories she will recognize her native habitat and feel energized and excited to be home again.

Yes, that’s a long time to be bored and lonely. It would be easy to believe she can’t possibly still maintain those memories of her native waters and her cultural identity.

But we can’t assume we know the limits of what she knows.

Howard began working as field researcher with the Center for Whale Research on San Juan Island in 1981. In 1995 he began campaigning to return Lolita/Tokitae, a Southern Resident orca captured in 1970 to her home waters in the Salish Sea.