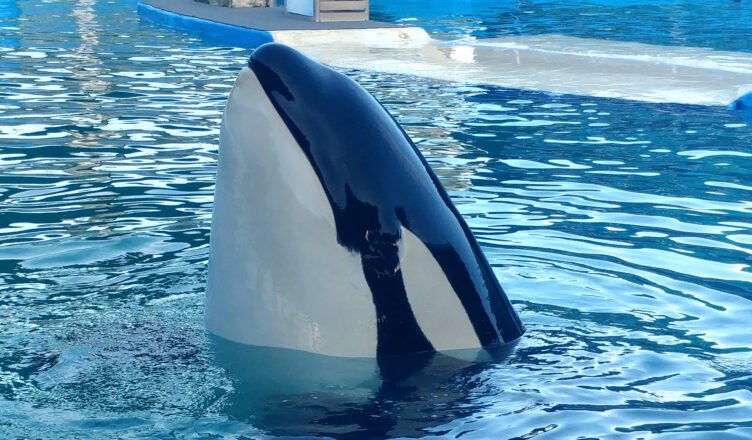 Formerly known as “Lolita” by the marine park, and Tokitae, or “Toki” by the staff at the park, and now Sk’aliCh’elh-tenaut (SKAH-lee CHUCK-ten-NUT) by Lummi elders who consider her a kidnapped relation, suddenly this orca must move out of the small tank she’s been in for almost 52 years.

On March 3 the USDA granted a license to operate the Seaquarium to The Dolphin Company, with the unusual stipulation that Tokitae and Li’i, a Pacific White-sided dolphin in the tank with her, may not be displayed in any way, and the whale stadium must remain closed. That license cleared the way for Miami-Dade County to approve the lease to TDC to officially own and operate the Seaquarium. So now Toki is warehoused in a closed stadium, and is an economic and PR liability to the new owner.

But where will she go? Rumor has it that NOAA Fisheries, who will need to sign off on any plan to move her, fears she is too old or too sick to return to her ocean habitat, and believes the safest place for her would be SeaWorld, but it’s doubtful SeaWorld would want the liability. The other orcas there would try to force her to submit to their hierarchy, disrupting the shows and creating a public relations nightmare that would threaten SeaWorld’s fragile reputation. And she probably wouldn’t last long there due to the stresses.

The only other viable option is to fly her back to her native waters, and the best available information tells us she is actually in good health and good spirits, and is capable of being transported to a sea pen in the Salish Sea. To date there has been no opinion offered by any veterinarian or medical specialist, so our only real information comes from recent videos and a first person reports from Miami-Dade County Commissioner Raquel Regalado, who describes her in “good spirits” as Toki breaches and swims normally, and Miami-Dade Mayor Daniella Levine Cava, who said staff at the Seaquarium “are not concerned about her health.” Despite anonymous reports that she had pneumonia and was ill, she looks fine and is reportedly now in good health. Hopefully the new owner of the park will soon commission an independent medical examination.

Meanwhile, a momentum is building to return her to her home waters. Moral and spiritual guidance is provided by Lummi elders, with logistical expertise available from the Whale Sanctuary Project, and a wealthy philanthropist has offered financial support. Others are involved who are familiar with Southern Resident orcas and orca natural history.

Some fear that she may carry a disease to her family in the Salish Sea, or that she may lack immunity to pathogens there, but that’s an easy problem to manage. The same alarms were raised before Keiko was allowed to return to his native waters off Iceland, so a panel of veterinarians and pathologists was appointed by the USDA to examine him for every known pathogen. He was found negative for all of them and given a clean bill of health before he was flown home to Iceland.

We also hear people say that she may not survive the stress of the transport, but since 1966 hundreds of orcas have been flown to marine parks and not one has died or been harmed due to transport. Her transport will be done safely and professionally, accompanied and reassured by humans she trusts every step of the way.

Many people worry that Toki will not survive in her native habitat. There is seldom any explanation, just that she’ll be shocked by the cold, dark ocean after over 50 years in a concrete tank. The answer to those concerns is to learn about her family, the Southern Residents, and her species, Orcinus orca, and their astounding capabilities and intelligence. Orcas have been the absolute top predators in the world’s oceans for millions of years, and do not know fear. They form lifelong bonds of affection and loyalty with their families and cultural communities. Their brains are 5 times the size of ours, so we should pause before we assume we know what they may know or remember from their past.

Toki was captured at about 4 years old, so she had been communicating and learning from her family, and catching live fish, for about 3 years before capture. There is every reason to assume she still remembers the essence of her life before capture. Her native waters will feel familiar to her.

What comes next? A location for her rehabilitation sea pen must be identified. A cove in East Sound, Orcas Island in Washington is available and would work fine, at least for her initial return. The site must be permitted by the Army Corps of Engineers and the Washington Dept. of Natural Resources, to ensure there is no disruption of the natural ecosystem.

When she is finally home, at some point she is likely to hear her family’s calls during their normal travels nearby. When she hears them she will probably call back in the unique calls she learned as a young family member. They will probably recognize her calls as coming from a member of their extended family. What happens next can’t be predicted, but we expect tentative approaches and mutual curiosity would follow. What a relief that will be for her, and for all of us.

Howard began working as field researcher with the Center for Whale Research on San Juan Island in 1981. In 1995 he began campaigning to return Lolita/Tokitae, a Southern Resident orca captured in 1970 to her home waters in the Salish Sea.