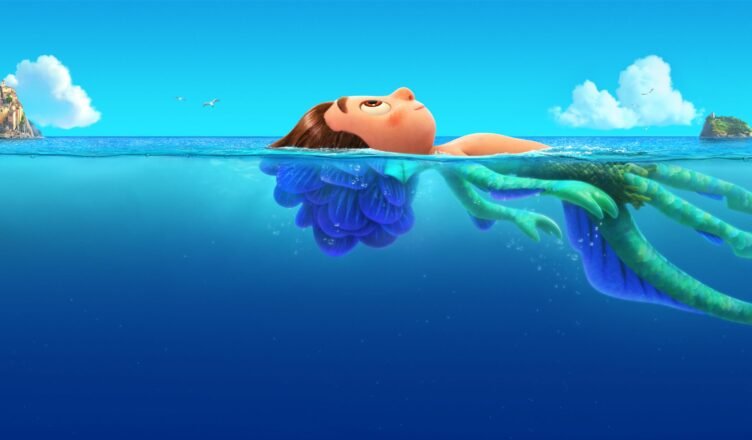 Luca is the new movie from Pixar, the animation studio that gave us the Toy Story series and many (many) computer animated movies you or your children grew up on. Their latest release, though, may be their smallest movie in scope in maybe…ever? But ultimately, that’s what makes it great. Low stakes, a gossamer setting, and a breezy attitude suffuse Luca with a laidback beauty, resulting in an utterly charming movie that’s Pixar’s best since, well, Soul from late last year. These dudes are on a roll again.

Luca is the closest that Pixar has come to emulating the Studio Ghibli formula.

Pixar loves name checking the Japanese animation studio –heck, Luca’s set in an idyllic Italian coastal fishing village called Porto Rosso—and they’ve long cited Ghibli as an influence. Funny thing, as much as Pixar throws credit to Ghibli, I never quite saw that influence in their output. Up came close. It was a charming and gentle adventure at first that gave way to a silly action finale featuring senior citizens sword fighting with canes, literal dog fights as canines in biplanes tried to shoot each other down, and more than one moment where a child was endangered. Cute and charming were thrown out the window for action and violence.

Luca, though, like many of the best Ghibli works, starts chill and basically stays that way to the end. Most of the movie revolves around a silly race that’s for the town’s children. The villain, meanwhile, is more of a joke and a pain in the ass than a threat. And while the threat of violence exists in the background –the story has two sea creatures that can take human form living in a village that has a history of hunting sea monsters– not much comes of it; a few thrown spears and not much more.

Without hitting you over the head, the movie’s about more than just a race through the town, of course. The nature of friendship, family, and the pains of growing up and moving on are sturdily built into the film’s subtext. What’s nice here is that while the headier stuff is there, kids probably won’t be bored by it. While Soul was great and pushed at the boundaries of what American animated movies could tackle thematically, I’ve wondered just how entertained kids were by it? In every way that Soul was big, Luca is small. That’s what I like about it.

Like Miyazaki’s My Neighbor Totoro, Luca marries the supernatural with the every-day while emphasizing the beauty of nature. And like Totoro, there’s little to no explanation for the out-of-this-world. Sea creatures exist in Luca’s universe: sentient fish people who mind their own business and lead underwater lives similar to our above ones. Luca (an appropriately wide-eyed Jacob Tremblay), for example, is basically a sheep herder, except he herds fish. He’s also a prototypical Disney hero (Pixar is a subsidiary of the Disney corporation), a restless kid who wants to explore the world while his mom (Maya Rudolph) tries to keep him home and safe, away from the humans who think they’re monsters.

Lucky for Luca, he and his fellow sea creatures take human form when out of the water, and when Luca meets Alberto (Jack Dylan Grazer, perfectly boisterous), a fellow sea “monster” and likeable know-it-all living on his own on land, the two kids become fast friends. Their ultimate goal? To make enough money to buy a Vespa and go on adventures. Hey, it’s Italy in the ‘50s. Makes sense.

Yeah, unlike many Ghibli films, there’s a bit of slapstick here. But it’s not intrusive and often funny. It helps that the character designs and animations really sell the big, comical, physical movements while also capturing the subtle changes of facial expression. Notice Alberto’s quick side eye when he first realizes that Luca’s spending more time with their new friend, Giulia (Emma Berman), than him. This could have been a silent film and we’d still know exactly what’s going on.

Let’s face it. This is a Pixar movie, so yeah, of course the animation is beautiful. But I’m not much of a computer animation ass kisser, so I hope it actually means something when I say that. The backgrounds look vaguely like Wes Anderson-ian miniature tableaus or backgrounds on a Disney ride. It’s so idealized and pretty, it’s not exactly real anymore while still boasting a plethora of detail (my favorite: a cartooned poster of La Strada outside the town movie theater).

With movie ticket prices so high, especially when taking the whole family, and the fact that many of us still aren’t that comfortable stepping into a theater, vaccinated or not, I wouldn’t exactly recommend running to one to catch Luca. The movie’s so seemingly slight that you might feel ripped off. In that way, it’s found a perfect home on Disney Plus. It’s such a low-risk investment to watch it on the streaming service (this one doesn’t have the $30 additional access fee) that the film’s myriad charms have a much better chance of taking hold. And believe me, they will take hold.