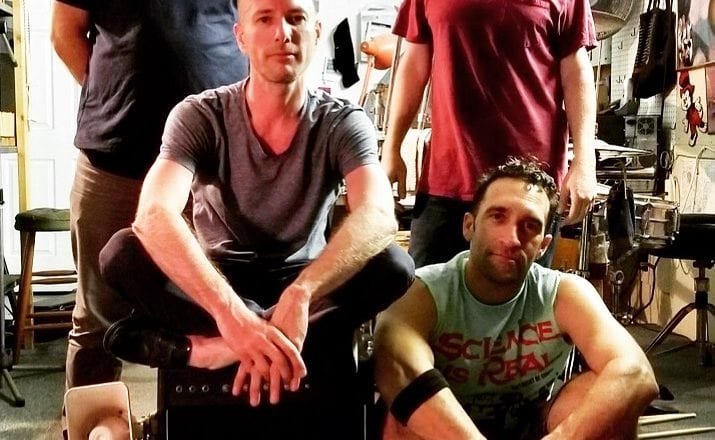 United by a love for the Pixies, Machete was everything that was good about rock music in Miami in the ’90’s and 2000’s. After a long hiatus the band is back for a few reunion shows including October 20 at Las Rosas and October 27 at Churchill’s.  We spoke to Machete drummer (and author of Missing) Luis Garcia to get the lowdown on the band.

What first brought Machete together?

Ben Carrillo  and I were good friends at Sunset Senior High School, and we were into the same kinds of music (punk, alternative, hardcore, pop), and we wanted to start a band. We tried a couple of guys, but they sucked. We had a few practice sessions that went nowhere. Then one day Ben suggested we ask Justin Gracer  to join us.  Ben introduced us at lunch. Justin was wearing these old crushed spectacles without lenses in them, and it looked like the spectacles had been run over by lots of cars. I think he’d just found them a few minutes prior in the street. He didn’t say anything when Ben introduced us. I said, “Wassup?” But Justin just opened his mouth to reveal three hits of acid on his tongue. I knew at that moment that I wanted this guy in my band.
We started practicing at my dad’s house every day after school, or sometimes during school; we’d skip at lunchtime and not go back to school. All we did were Pixies, Frank Black, Versus, and Unrest covers. We started playing a shit ton of parties as a three-piece, but soon Justin wanted a second guitarist, so we asked Brandon Sparling to join. In 1994, we played a Battle of the Bands at Sunset Sr. High. Cavity and a few other no-name bands were in this line-up. All the bands played originals, but we played a whole set of Pixies covers and brought down the house. After this, we started getting requests to play people’s parties. We were playing parties almost every weekend.
At the end of 1994, we started writing our own songs. However, Justin and Brandon are both very headstrong musicians, and this simply didn’t work out. Brandon left the band, and then Justin asked Seth Berky to play second guitar. We were still practicing daily at my dad’s house, and we became very prolific at writing songs. It was around this time that the Machete sound started to define itself. We had found an amplifier in a dumpster one night, and Seth and Justin got the idea to hook an alarm horn up to it. Justin’s dad provided the alarm horn, and they rigged the amp with the alarm horn attached to the side of it so that Justin could switch from the amp to the horn and distort it if he wanted. That was around the time Machete was really born. We had a bunch of dumb names before Machete. I think we played as Ghost Rider for the Battle of the Bands at Sunset.

We started playing lots of shows all over Miami with lots of historic Miami bands at all the venues that were the shit in the 90s. Rat Bastard saw us play at Chruchill’s once and decided to record us. We did a benefit show with Sparkchamber at Cheers to raise money for a record. About 15 bands were involved. Every band played two Pixies covers. Machete closed out the show and pretty much played the rest of the Pixies songs that weren’t played, and we took requests. We knew pretty much every Pixies song. From this show came our first release: The Machete / Sparkchamber Split 7″. Machete had two songs on it: “3hp” and “Obstacle Course.” That was our peak with the original line-up. We, got a lot of fanfare, and came out in the New Times and Street.

What broke Machete up?

By 1998, Seth and I were into heavy drugs. We ended up in jail and rehab. That was the first break-up. Machete went on as a three-piece for a while with Kris King  on drums. While I basked in the revelry of drug use, jail, rehab, and repeat for many years Seth recovered fairly quickly and rejoined the band. This was in 2000. They released an album and played a few shows in NYC. I can’t tell you much about this time since I was nowhere to be found. I know they came out in the papers and got a lot of fanfare. They broke up for reasons unknown to me in 2005, and then did a final reunion show in 2010.

How did this Machete reunion come together?

A few months ago Justin  came down from Colorado to visit his dad for father’s day. We all got together at the Mighty for sausages and beer, and sometime during the night we got the idea to go jam out some songs at Justin’s dad’s warehouse, where all the old equipment was in storage, including the found-in-the-dumpster amp with the alarm horn still attached to the side. We got there and put all the shit back together and started playing the old songs. Muscle memory kicked in. It was magic. Afterwards, Ben said, “So when’s the show?”
Seth took all the equipment home and rewired it. We’re still using that same amp. Justin went home to Denver. And we’ve all been practicing the songs solo, like on our own. In the meantime, I’ve been booking the shows and printing Machete T-shirts (for sale for $20), and Ben found a bunch of old 7″ records (also for sale for $5). Ben and Seth have kids now, but despite that, we’ve been practicing at the warehouse every chance we get. We had only three rehearsals at the warehouse before our first show this past weekend at Placeholder Gallery. It was pretty tight considering that we haven’t played together but three times in 20 years.

What can people expect at Machete shows?

People can expect music that’s for musicians by musicians. The songs are angular and complicated and tricky. They keep you thinking and you never know what’s next. The vocals are beautiful, but they are few and far between. A lot of the songs are instrumental. They fucking rock! Influences are all the bands we covered.

What do you guys think of the Danny Trejo Machete movies?

I can honestly tell you that we have never even talked about it. Was he even making movies as Machete in 1995?
This article was filed by David Rolland, author of The End of the Century.
Liked it? Take a second to support The Jitney on Patreon! The Jitney needs gas. Please donate or become a Patron here