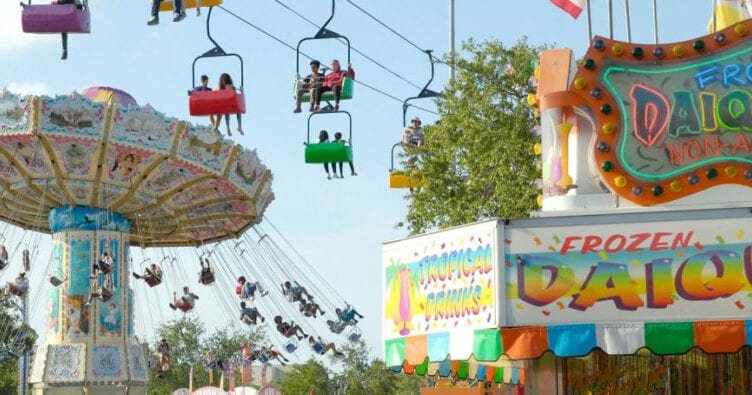 Click here to read Made of Moments: A Night at the Dade County Youth Fair Circa 1984 Part 1.

After sweeping the thespian district awards that evening, we ran through the midway and out to the parking lot until we reached our cars. The trophies were properly displayed against the worn vinyl of backseats. We turned and stood for a moment to behold the fair’s glowing rainbow in the distance, a faint, smoky aura coming off the neon. We locked arms and walked back to the carnival with a brisk pace, relieved of organized rituals, loving the present with its delicious freedom and whimsical melody.

We walked through the main entrance with epic smiles and strolled by the fair’s offerings and oddities, waving at acquaintances here and there, splashing in the pond of local fame and riding the wave of a swell time. My brother and I looked at each other and smiled. He knew what I was after and felt sorry for me. He put his arm around mine and squeezed.  Then he jettisoned, leaving me smarting in the wake of separation. He joined his equals who were now fumbling wads of money for their ride tickets. The night was crisp but the air thick with a melee of food odors and generator fumes. The Himalaya and other speed rides were blaring popular songs. They will forever be masterpieces, the score for an impossible evening.

“I Want a New Drug” came on, and I understood. The song moved me in a fresh and unexpected way. My chest hurt with affection and gratitude. I looked at her and grinned like I knew who I was and what she wanted. She did not witness this act of courage, for I was a peripheral ninja. I could always sense with uncanny accuracy when she was about to glance my way, and, within a microsecond, I was ignoring her, pointing at nothing and mumbling inaudibly to the nearest body. It was a subtle talent, a loser strategy. As the song played, I realized it was an anthem of purpose, camouflaged in Top 40 fatigue, but lined with a divine truth that rendered the tune invigorating. Again, I’d walk by her and brush with her force. It was penetrating but sublime, like the voice of a great soprano, and I basked in multiple encores.

I listened carefully for opportunities to make my mark, to enter their conversation with insight or humor. A clever comment had legs. But most entrances were barricaded, and once in, I’d immediately search for exit signs. The little confidence I could muster was precarious and based on a bona fide obsession, and I thought that I just might, in my desperate and excited condition, say something that would forever banish me from her world.

She laughed at a joke, a dumb anecdote related by a buffoon near the shooting gallery, a story about chance encounters and luck. I couldn’t believe she found humor in the cretin’s blustering account. Maybe she laughed to egg him on in his worship, all the while finding him an utter bore, a lesser subject, an obsequious nitwit. Right then (the caliber of endless suitors notwithstanding) I thought of my slim chances against an army of untalented rivals. I was well aware of these incompetent individuals, knew every one of them and their inability to feel what was required for such a prize. Their wooing resembled bestial mooing. They were cattle, emotional bullies and brutes harassing something fragile, grabbing at beauty with thick, fumbling fingers, like an udder caress, using every trick in the book, but poring over the wrong volume. Most of them had admirable qualities, those associated with being a good catch or an attractive status appendage, but they didn’t know about long grief and smoldering ardor. They’d scoff at the thought of absolute devotion because nothing was worth so much of their time and effort.

The Sky Ride was a minor form of amusement, but an excellent means of transportation. It carried its passengers, in small cars hanging on a thin cable, from one side of the midway to the other. It gave your feet a rest and your mind the urge to spit on the tiny humans crawling on the ground below. If on a date, the benign attraction was an opportunity for closeness and isolation, a chance for awkward silence and the heavy, meaningful sentiment it often carries. The ride never stops; that is, each car, like a ski lift, scoops passengers as it briefly glides two feet above the platform floor, and continues on its elliptical journey.

We quickly formed pairs and jumped inside the primary-colored little wagons. Ours was blue, and I don’t remember whether I planned it, or if fate shuffled its subjects in proper order, but when the bar was secured and the bearded carnie shouted safety instructions, she was seated beside me, staring ahead, appreciating the points glittering above the horizon, focusing on future plans and a bigger life in a brighter place.  I distracted her from her glamorous daze.

“I’ve always loved the fair.” It was the best I could do.

She began to turn her head my way, but her eyes held the distance before her. (She was hovering above a red carpet under a grand marquise, shielding her eyes from the incessant flash of greedy bulbs, mentally waving at people who loved and hated her). She released slowly and met my gaze with a distracted smile. Apparently, she hadn’t been listening or found my comment too banal to acknowledge.

“I love it up here…at night. It’s sexy. You’re special you know that? Tell me something about you.” Her boldness always stabbed me off guard.

“About me. I love music and play drums. I’m sophomore class president. I’m going out for varsity baseball next year. I really like my brother’s friends and spending time with you all…”

“I know all those things, but I don’t really know you. I’d like to. Tell me something I don’t know, something from inside. You’re always looking at me, but you hardly say a word.”

And in a brief moment of mature clarity: “You know too much about me already, and it makes me uncomfortable—I mean, the things I never say. Just sitting here, my heart is racing, and I feel excited and happy and nervous.”

It sounds like an unlikely moment, but it happened, and it was inspired.

“I know you’ve had a crush on me for a long time. I’m flattered, and I think you’re great.”

We looked down at our dangling feet, listening to the faint hysteria below, thinking without speaking, floating in rich silence for a full minute.

“You know, I have this memory of you,” she said. “It was my freshman year, and I was singing “The Rose” at an assembly during the school day. Some ninth grade classes were invited, but you were a seventh grader, and I remember you sitting in the back of the auditorium by yourself. I knew it was you from that shirt you always wore.  I found it strange because I knew you didn’t belong there, but you’d made it somehow. That memory is so clear for some reason. I think it was one of my best performances. Do you remember that? The assembly, I mean. The Bette Midler song?”

I looked at her with reverence, “Yeah. I remember.”

And not another word was spoken until my feet touched the ground.

We all jumped off in turn and flocked towards the ice cream stand. I was a bit off balance, drunk with the effervescence of flight, coming to terms with gravity and all its seriousness. How I wanted to tell my brother of my bold journey! There was progress, for the thing was addressed in earnest, but how was I to proceed, now that it had been spoken? I stared at JC with intensity, attempting to get his attention, but he was directing the show, a Broadway helmsman in charge with delegating charm.  JC was often good to me, which is common for older brothers temporarily distanced from the burden of reputation, but seldom in public, where his actions were constantly scrutinized. Moreover, he paid little attention to my needs when he was concentrating on his own, for I was a mild annoyance, a vague preoccupation, and my ambitious ardor was not something he took seriously. He’d throw me a bone once in a while, but it often left a nasty bump on my head. He meant well, but I couldn’t count on him, and why should I? My passion, born three years earlier was my own. He made the introduction on that fateful fall afternoon; his part was done. That casual, social gesture was the waking of my giant.