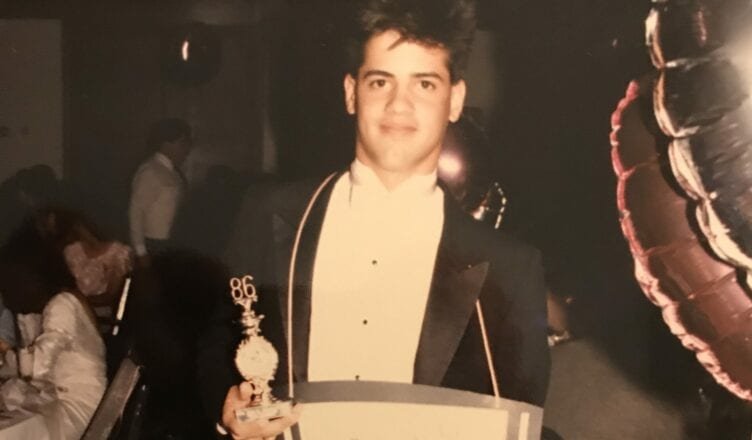 So I decided to handle things on my own. I gave up on JC’s guidance for the moment and concentrated on my formidable task. It was finally out there. The Sky Ride exchange bore fruit fragrant enough to pull, and my course was clear. The events that unfolded as the night heightened could only be compared to narcotic fantasy. I was conscious and acutely aware of every vivid detail, but an anxious euphoria elevated me from the dusty asphalt. We’d walk with an occasional skip through the midway, the older kids holding and dropping hands at random intervals, sharing morsels of food and affection with giddy delight. Every time another male touched her or made her laugh, I’d feel the effects of the Gravitron all over again, my heart plummeting to the ground, nearly knocking me on my nates. Strangely, I sometimes felt camaraderie with the male involved, especially if he was a good friend. Accompanying the prayer that the Ferris wheel would collapse on his head was a feeling of empathy and shared desire. She was every boy’s object of affection. We were all in this together but for ourselves, and I was the wild card.

In desperation, watching the moon’s relentless pace across the black sky and the ride tickets disappearing from my pocket, I went for broke. This cowardice had lasted far too long, and the constant fear of a misstep or verbal blunder suddenly left me. Doing nothing presented the worst possible loss. Our brief talk on the last ride had opened a door, and I decided to walk through boldly, dismissing the possible dangers lurking beyond this beckoning, fiery threshold. I wanted to take her hand and walk away without a word, to relieve her of the boredom she was unaware of, to usher her small feet onto my dense but bouyant cloud, and finally, with the rising affection of a lifetime, show her how it felt to be loved. I didn’t do this, of course, but I pressed on.

I continued to watch her closely, but now, when our eyes met, I’d lock and hold. My look was steady but hers darted nervously from my face to the ground, and I felt strong. It was a hesitant invitation, a small victory, and the genesis of this budding courtship. I made my way next to her and decided to remain close. Her look and manner told me I had the right to be near, to ask her things, to win prizes in her honor, to nibble on her decadent Elephant Ear, to hold her soda when the ice made her hands too wet or cold. She ran and I outran her, passing her and waiting, arms outstretched, for her docking; she laughed, and I laughed harder, honking away like a tragically seasoned clown; she sang, and I sang louder, drowning the night with the transcendent music of this fledgling bond, insatiably quaffing the moment in gulps that left me breathless.

The dynamic of the group changed. She accepted my advance willingly and openly, and the others now looked at me with a mixture of respect and envy. I penetrated their circle and nourished it generously. I could hold my own because I became strong by her side. No longer afraid, our connection allowed my best to come forth, and we lived the rest of that night together. Sometimes she’d stray, not quite at home with one on one attention. She’d get a quick fix from a friend or admirer, a snippet of attention from another smitten soul, but she’d always come back and fall in beside me, slowly realizing that she felt something–something mightier than the usual kitten-play, a feeling that would not allow her to wander long or far, a magnetic pull that frightened her a bit, and I could see the wonder of this new thing waking in her. Watching her flounder with control and know-how, I led, showing her the ropes, gently reassuring her with my unflappable conviction. To clarify–it’s not that I knew anything—it’s that I felt everything. I was fifteen, in way over my head and out of my league, but a sage among fools, a doomed hero in a drama not yet real but already conceived, lived out and cried over, a well-known legend in the annals of my chest cavity. I was living an inevitable history, a certain destiny, based solely on a talented heart and uncompromising will.

The haunted house loomed in the distance. Two passengers per car and sustained darkness. We arrived at the laughable “House of Usher” and made our way up the aluminum steps. The pale, cloaked carnie was scarier than any evil inside, and he snatched our tickets with soiled ferocity. There was a moment of awkward hesitation for riding arrangements, and again, she and I were seated side by side. This time I asserted myself mildly. I took her hand, a heartbreaking thing with pearly nails, and held it lightly. I wouldn’t dare kiss her yet. Most would have jumped at the opportunity; after all, I’d been pining for this moment forever. But I’ve never been one to rush these things. The relish is in the process. There was also the shadow of rejection, every dreamer’s reliable companion. I looked at her hard through the black space between us, and there were sporadic flashes of light that revealed a loving consensus. Every ridiculous skull that jumped out of a coffin briefly illuminated a tender moment, and this thing grew in the span of a scary ride.

Why the sudden surrender? It was as if she’d decided, on a cogent hunch, that I was worth the risk. What did it mean, this sea change, and how sincere was its nature? My head swam with gorgeous possibilities and elegant betrayals, but I forced myself to glide with the moment, allowing little to affect my immediate course and smooth conquest. We were off the ride and inseparable. The smashed kaleidoscope surrounding us, surreal in neon imagery and fairy tale colors, enhanced our present trance, and we frolicked with abandon among the living machines and faceless crowds. Nothing else mattered.

After several unbelievable hours, it was time to go home, and we made our way to the exit. We stopped for one more treat. She craved a candy apple.

“Will you have some?” she asked, hopefully.

I purchased the apple, and we walked towards the parking lot, suddenly realizing we were still part of a group. For the past couple of hours they had become brown dwarfs in the background radiation. We burned with the brightness of newborn stars. They came slowly into focus, their faces stunned and confused, my brother’s with a hint of pride and concern. Most made off in separate cars, but she and I climbed inside her sister, Doris’s, vintage, ruby-red Ford Falcon, along with my brother and two parasites who fumed at my infuriating beginner’s luck. 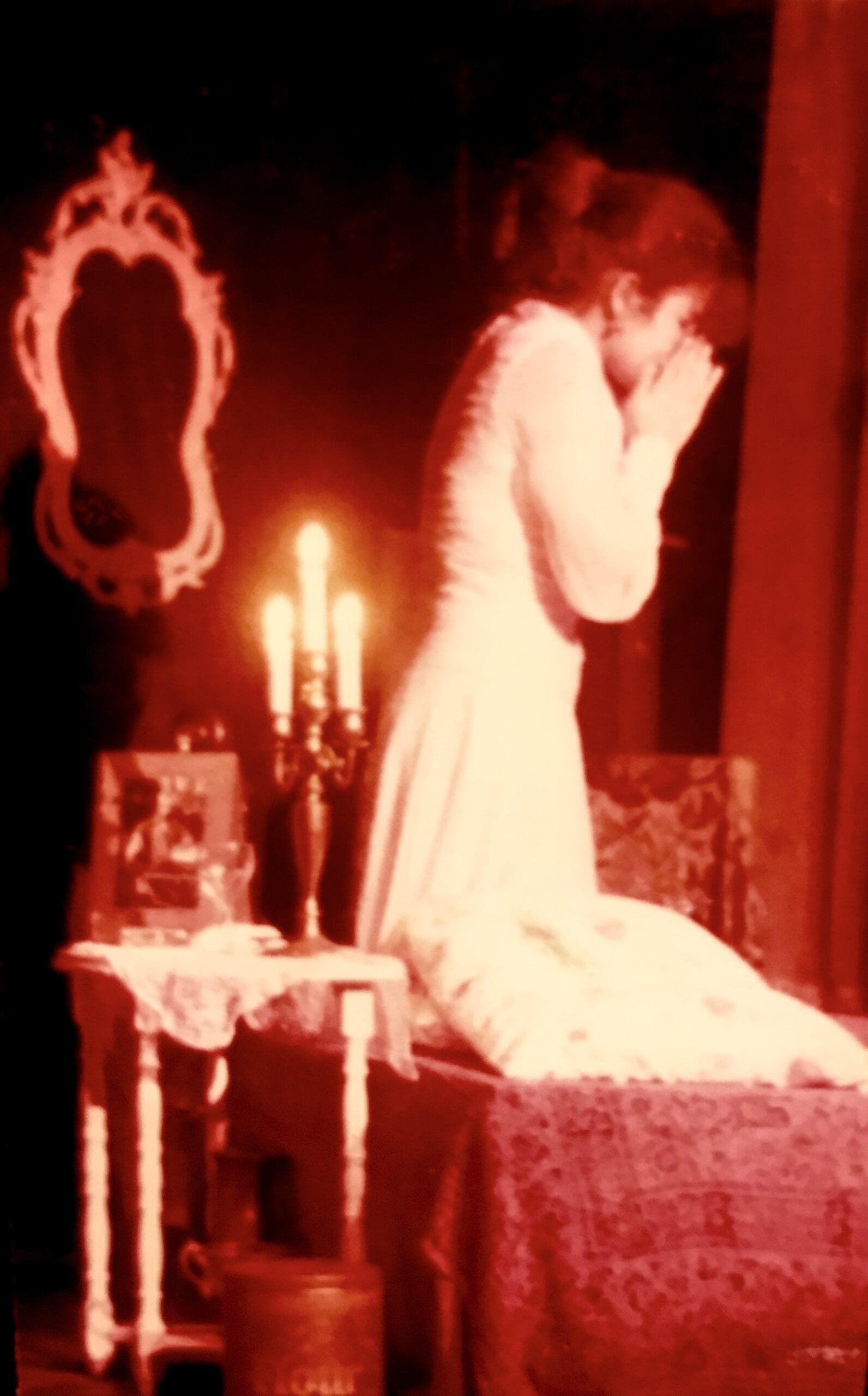 How mistaken they were–how stupid and misplaced their envy and wrongful claims, their ill will and superior mugs. This moment was mine and deservedly so. My dues had been exorbitant, my patience saintly.

With the start of the engine, the stereo played and the feast began. Coming from a homemade tape through crackling speakers were the Psychedelic Furs and “Heaven.” The crowded back seat and music brought swooning. She initiated the affair with exuberance, with total disregard for the others, as if our union, once again, erased their forms. Her first lick killed me a little. She handed me the lacquered, pierced apple, daring me to swipe my tongue over her glistening track, an act that would bind us with hardened sweetness and a simulated kiss. I covered the same ground with my mouth and tongue, and her eyes softened a bit. We repeated the ritual several times, and the distance between turn and tongues shrank in time and space. Soon our lips were brushing lightly as our mouths glided over the smooth surface. We were lost in this oral dance, famished and enraptured, and something shot up hard from the bottom every time her lips grazed mine, a feeling like I’d spill it all at next contact, but then I wouldn’t, it would just grow in butterfly-in-the gut pain until I hurt without release. The first bite was hers, and I followed, ripping a deep chunk, exposing the core of the fruit. Fragrant breathing, melodic sighing, eyes-looking-in-eyes-smiling, and sweet juices were at animal rollick. Much transpired without a concrete kiss. She was playing without committing, and I was a willing action figure. The meat and confection gave way to seed. All at once it stopped, and we were left bashful and weak, she with a wooden skewer gripped tightly in her trembling hand.

We held hands the entire ride home. The moist cocoon in the glow of our palms only hinted at the raging tempest. There was fear and complete surrender. There was solace and restrained jubilation–a weightless, galvanic vibration. There was heat and unbearable tenderness. There was crippled hope. But not a word was spoken.

We said goodbye casually at the end, as if nothing life-altering had happened.  I wanted confirmation of what we shared, a promise of continuation, some shred of acknowledgement, but she was amiably cool and gave me nothing. I swallowed the surging wave within and returned her parting gesture with comparable nonchalance. As the car drove away, the rear lights dimmed with the stretching road until the car stopped at the corner, the brake lights glowing a brighter crimson momentarily, and I didn’t turn away until well after the car had disappeared. My brother stood beside me and placed his hand on my shoulder. I cried then. His brotherly sympathy broke the dam, and I nestled in his embrace without shame or qualm.

“I’m happy for you because you’ve wanted this for so long. You’ve earned it. But you don’t know what you’re in for. Tonight meant more to you. Be careful.”

“I think you’re wrong, and I don’t know how to stop anyway.”

I escaped to my room and played The Smiths’ “Please, Please, Please…” several times. I worried about tomorrow. I didn’t change or wash or care. I lay down and stared at the dark in all its grisly wonder, reality’s humiliating slideshow flickering in the deepest recesses, regaling my green but fertile psyche, and I finally fell asleep with grime on my hands, her glaze on my face, her stake through my heart.

A week later we were a couple. But that’s a longer story, a richer collection of moments, and the giant who still follows me wherever I go.