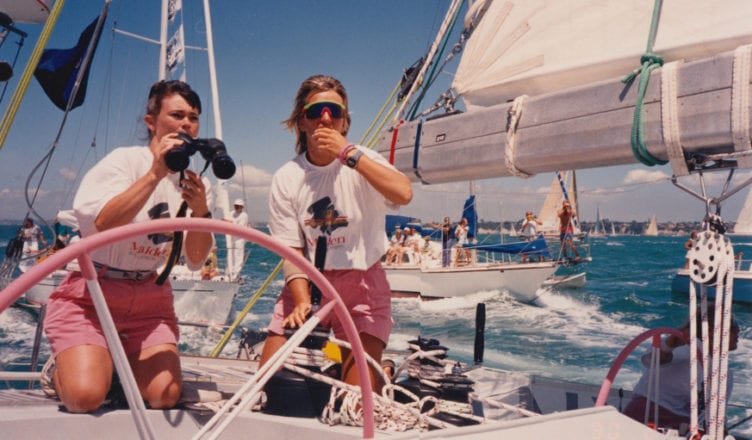 “The ocean is always trying to kill you. It doesn’t take a break.” is the dialogue that the new documentary Maiden begins with. That line spoken by Tracy Edwards, the skipper of the first all female crew to sail an around the world race,  is repeated later in the movie as well. But the more interesting and thematic words come mid-way  through the film. Edwards is shown in an interview from 1989 where she insists she’s not a feminist. In fact, she says, she hates the word “feminism”.

Upon 30 years of reflection an older Edwards admits the act that earned her the right to be the subject of a documentary was feminist. But the younger Edwards didn’t see what she was doing as groundbreaking. She just wanted to take part of the prestigious  Whitbread Round the World Race that would have no part of her. And so she organized an all-female crew. And what started off as a novelty, ended nine months later with her becoming the first female winner of the Yachtsman of the Year Trophy.

The movie spends the first half hour attempting to paint a portrait of Edwards. That portion of the movie doesn’t dive too deep, and is thus a bit of a bore. But once the race begins and Edwards has organized her boat, Maiden, and her crew, the movie becomes riveting. The archival footage demonstrates the hardships of how this was no pleasure cruise. The  southern leg of the race in particular where the yachts swim as close to Antarctica as the icebergs and subzero temperatures will allow is especially fascinating.

It would have been interesting for the filmmakers to go into more detail of the ins and outs of day to day sailing. Fleshing out the stories of the other women on Maiden would also have made the movie a better. But one undeniable fact is Maiden does a majestic job of demonstrating the power and fury of the ocean. Not everyone makes it out of the race alive. Another causality of the race was the idea that women couldn’t sail with the best of men.