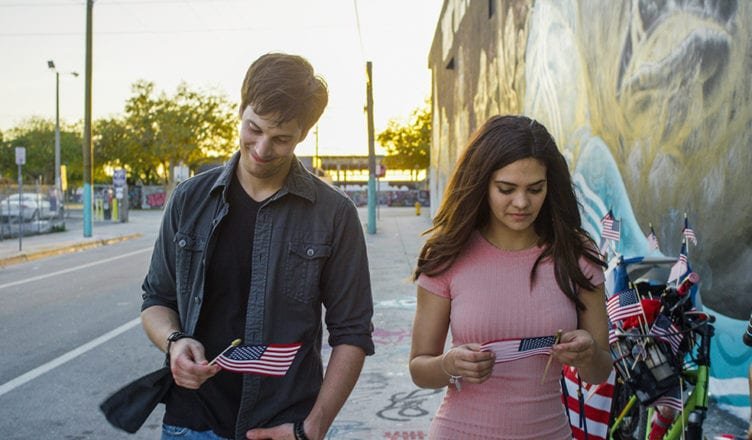 If you think the movie is a play on Donald Trump’s infamous MAGA (Make America Great Again) slogan — you’re right. The plot of the rom-com also centers around Trump’s favorite issue, immigration, apparently forbidden in the eyes of many. Even for many in Miami.

The movie’s official website describes the plot as follows.

Set in Miami during the Trump ascendancy, Make Love Great Again pits adorable newlyweds Chris and Natalie against a pair of unduly suspicious federal agents charged with approving the verity of their marriage. Chris is American, Natalie’s a Mexican in the U.S. on a student visa; their nuptials can grant her that coveted permanent residency — but only if their love story seems credible.

Make Love Great Again is about how sometimes you need to lie in order to tell the truth – and how, with a little luck and tenacity, love trumps all.

Shane Kinsler, a full-time employee in the University of Miami’s Media Services department, also received his MFA from the school. The script is his baby but he co-wrote it with UM Professor Tom Musca, the writer of the 1988 critically acclaimed Latino classic Stand and Deliver.

Kinsler, according to his Facebook page, recently announced the news. “We can finally share the news because it’s official! Our little movie will be available May 10th on HBO Latino, HBO Now, and HBO Go! I can not say thank you enough to everyone involved with the creation of this movie! The amazing producers, cast, and crew… We did it!  Tom Musca and everyone from his screenwriting class, way back when it was called “Bruno and Naomi’s Blind Date,” to everyone who came to table reads, and anyone who read this baby and provided feedback over the past ten years… Thank you! I hope you all can take a break from Game of Thrones to check it out!”